County was ‘in the bullseye,’ had multiple tornado warnings, but only minor damage

The National Weather Service was predicting much more damage for the area — and even called Wilder on Thursday to find out.

“They said they were coming out for a damage assessment and I said, ‘That would be fine, but there’s not any damage to assess.’ There were trees, but we get that every time we get something,” he said.

“It really did look bad for a while, and it was. It just kept continuing. You would think it was going to let up, but it just didn’t seem to do it — that’s why they kept issuing those tornado warnings,” he said. 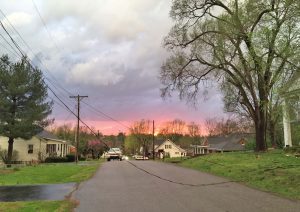 Photo courtesy of Perryville Fire Department
A power line leading to a home on East Third Street in Perryville was knocked down during Wednesday’s storms that swept through Boyle and surrounding counties. The road was closed between Polk and Buckner for about an hour as a crew from Kentucky Utilities worked to repair the line.

That’s also why the tornado sirens were sounded more than once, he said.

He said there were about eight people that took advantage of the courthouse shelter, and that it was always an option for others in the case of storms. It’s important to have a plan and get to shelter before a storm hits so no one is attempting to travel when the weather arrives, he said.

Wilder said no tornados touched down in Boyle County, and he doesn’t know of any that touched down anywhere else in the region, either. A funnel cloud was captured on camera in Lincoln County, but did not touch down, he said.

Wilder said the sky looked “ominous” during the storm, and the wind caused his vehicle to shake and move at one point.

“I kind of got a little on squeamish side,” he said. 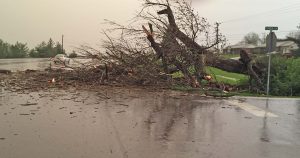 Boyle County was initially placed under a tornado watch at 2:50 p.m. Wednesday afternoon, to last until 11 p.m. A severe thunderstorm warning was issued at 6:52 p.m.

“We were under a tornado warning for almost an hour. That is quite a bit,” Wilder said. “I’m sure we had winds in excess of 60 miles an hour.”

While the winds didn’t damage property, they did bring down trees and power lines. Reports of trees down came from Third Street in Perryville; U.S. 127 at Bonta Lane north of Junction City; and in northern Boyle County, along Ky. 34 at Gun Range Road, on Stoney Point Road and at Taylor Road.

There was also water over the Crawford Hollow Bridge on Crawford Hollow Road, between Mitchellsburg and Forkland in western Boyle County; and water flooded the underpass on Maple Avenue in Danville.

There was a large amount of lightning throughout the afternoon and evening on Wednesday. The lack of severe damage surprised Wilder.

“It looked like the Fourth of July. I’m just amazed, as much lightning as we had, that we did not have something, a structure of some kind, struck by lightning,” Wilder said. “I just knew it was going to be a lot worse than what it was.”

The Boyle County weather station that is part of the Kentucky Mesonet network recorded 1.22 inches of rainfall Wednesday, along with a maximum three-second wind gust speed of 49 miles per hour.

Wilder said snow flurries are actually predicted today, but no accumulation is expected. He said it is expected to be about 75 degrees on Sunday. No severe weather is anticipated in the near future, but that outlook isn’t firm.

“With all this instability in the atmosphere, there’s always going to be that chance,” he said. “They’re not speaking of anything severe at this point, but that can change.”