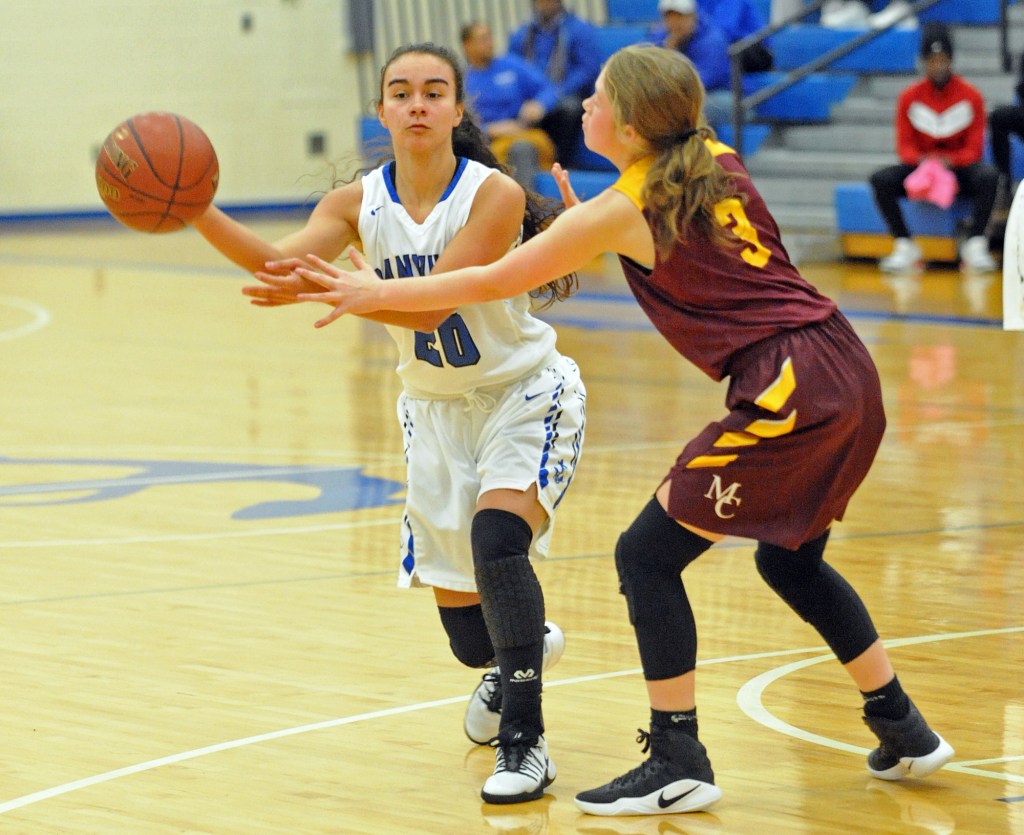 Matt Overing/matthew.overing@amnews.com Alyvia Walker passes around a McCreary Central defender during the first half of Thursday's game. Walker scored a game-high 14 points in the Admirals' win.

Danville’s Alyvia Walker and Boyle County’s Emmie Harris were named to the KABC East-West All-Star Game, set to be played April 15 at Transylvania University. Lincoln County senior Noah Young also made the boys game roster but said he doesn’t think he will attend due to prom being the same night.

Harris is also on the Kentucky vs. Ohio All-Star Game roster, which will be played Saturday at Thomas More College.

“I’m really excited for it, it’s a great opportunity and I’m blessed to get the opportunity to do it,” Harris said. “To represent Boyle County and be one of the first that I know of to be in the all-star game from our school, it’s really exciting.”

“”I think it is an acknowledgement of how talented Emmie is and how much others recognize all the hard work she has put into becoming a good basketball player,” Edwards said. “I can tell you no one has worked harder to get to where she is.”

Harris enjoyed a career year at Boyle County and was named KABC 12th Region Player of the Year. She averaged 26.3 points per game and broke the school scoring record. She has committed to play basketball at Division I Utah State next year.

“Their assistant coach, (JC) Carter, I’ve talked with him about it,” Harris said. “He thinks it’s exciting and a great opportunity, but it kind of stinks because they’re not allowed to come watch me or anything. But they’re excited for me.

“I’m excited about going to Utah. I’m glad that weight is off of my shoulders, trying to get that exposure.” 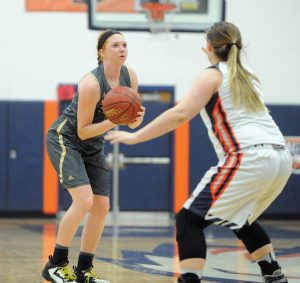 Matt Overing/matthew.overing@amnews.com
Emmie Harris broke the school record for points in a career on Tuesday, Feb. 14 at Madison Southern. She broke the record with a 3-point basket in the first quarter and finished with 34 points in the game.

Walker is in a different boat. She’s not playing basketball next year, instead dedicating her focus to academics. She’ll attend Louisville and study to be a pharmacist.

“I’m just going to go out and have fun, just play my hardest,” Walker said. “It’ll be fun playing new competition because I’ve never played against these girls before. So just to go out there and have fun, do what I do best and maybe get a few looks.”

She wouldn’t rule out potentially walking on somewhere in the future, but her sights are set on academics now.

Her coach at Danville, Michael Menifee, said he’s “had to tell a lot of coaches no” but is excited to watch her play another game representing the Admirals.

“For her, it’s just a big honor, something to continue the program,” she said. “We had CJ McPherson a part of it and was a Miss Basketball candidate. It’s just another person in line with the program. I’m pretty sure Ivy (Turner) will hopefully be on that path in the next couple of years. It’s just an honor for her showing the work that she has put in the program the past four years.

“I told her, things like this are an honor, if you get in the game for 20 minutes or two, just go out there and play, be yourself and enjoy the experience because not everybody gets to be a part of it.”

Walker said she’s been doing her best to stay in the gym to prepare for the game, whether it’s open gym or individual practice.

Harris has juggled track practice with her basketball training and said she’s had to stay active because she’ll be leaving for Utah soon.

“I’ve definitely been in the gym a lot in the past couple of weeks,” Harris said. “I’ve been staying in the gym because I have to leave very soon for college, I’m leaving June 23. But especially for these all-star games coming up, I’m just going to play like I usually do and give it my all and see what the result is.”