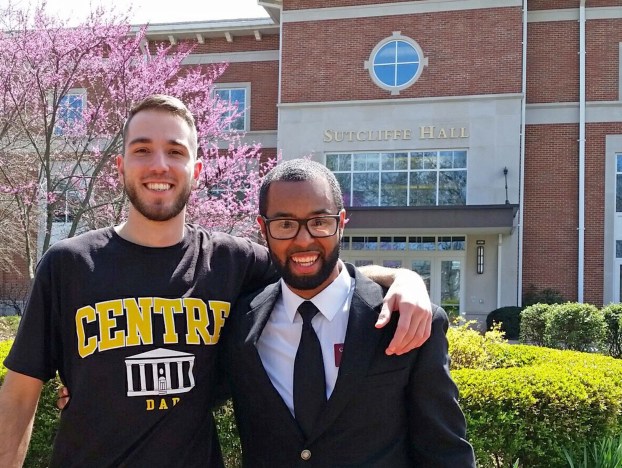 Event to bring together Boyle, Danville and Centre communities

Volunteers are desperately needed for the first B.C.D. 3v3 Community Event, to be held April 22 on the campus of Centre College.

The event is meant to break down some of the barriers between the Centre College community and the rest of Danville and Boyle County.

“My goal is to have at least 500 people here — that’s why I’m so stressed, because we need a lot of volunteers,” said Centre senior Hari Perisic, the brains behind the project.

B.C.D. 3v3 can be found on Facebook; and volunteers can sign up via a Google Doc available on the site. There, they can select among jobs such as setting up; providing first aid; working as runners; handling lost and found; monitoring the basketball tournament, bouncy houses and community conversation; serving food; and cleaning up. Some volunteers will be needed as early as 10 a.m., and some as late as 8 p.m.

“When I was sitting down to think of a name for this, I was like, ‘alright, this is for Boyle, Centre and Danville and we’re doing a three-on-three tournament. Those were the names I wrote on my paper,” Perisic said.

Perisic joined forces with freshman Chris Machado and community activist Rashea Ford to get the whole event off the ground.

“I’ve always said I want to bring together Boyle County, Danville and Centre College. That’s what this guy is trying to do,” Ford said.

Perisic called Ford “an integral part” of the event.

“Everything that’s happening with this event, I could not do without him,” he said. “Without Rashea, this would be so much smaller.”

Ford said it was Perisic’s “heart” that was making a difference.

The two instantly hit it off.

Perisic is originally from Yugoslavia; his family came to the United States as refugees during the civil war in that country. His family now resides in Boston.

He wanted to change that. So for one day, he wants to make sure the barriers are down and the doors are opened. The event will begin at 1 p.m. with a three-on-three basketball tournament in Sutcliffe Hall, on the campus of Centre College.

He knew it needed to be a three-on-three tournament because of the passion for basketball in central Kentucky.

“One of the ways I first engaged with the community was to get my hair cut. I was sitting in a barber shop … A lot of people talked about Louisville versus U.K. and it was really heated discussion about it. It was like, ‘Wow, people are really passionate about basketball here,’” he said. “Basketball has been a big part of my life; I kind of relate everything in my life to the lessons I learned through basketball.”

The tournament is for teams of three; the teams can be co-ed; and it’s open for those over the age of 18. Winners can claim bragging rights and $100 will be donated in that team’s honor to the charity of their choice.

Sign-ups will be the day of the event.

There will be more than basketball, Perisic said. On the lawn out front, there will be inflatables, community vendors, board games and other activities.

Beginning at 3 p.m., there will be a “community conversation” open to 300 people, also in Sutcliffe. United Way is providing a list of questions, Perisic said, which will allow the group to engage on community issues. The groups will be split into smaller groups of 10, with one moderator per group, to go through the questions for about 45 minutes. At the end, he said, they will come back together to discuss as a large group.

“I feel like in a large group, some voices will be lost, some people will be shy,” he said.

At the end, for the last 30 minutes, Perisic said, his dad, Srdjan Perisic, will speak on a topic that he said they aren’t releasing yet.

Those who participate in the conversation will receive a free meal ticket for after, and will receive free cookies from Pies for You and Cookies Too in Danville.

“We wanted to incentivize the community conversation,”  he said.

For those who don’t participate, there will still be games, inflatables and other activities going on outside. They will still be able to eat, too, for $6.

“We’re closing down Walnut Street and we’re going to have a barbecue here. Music, games of all sorts — basically when I imagine a cookout back home — (that’s) what I wanted to bring here,” Perisic said. “… You do something for everybody. And then a cookout, because when you have a cookout back home, everybody knows everybody, everybody grabs a plate.”

Food will be served from 4:30 to 7 p.m. and will include barbecue pulled chicken, veggie burgers and vegetarian baked beans. It’s sponsored by Sodexo. Water will be provided all day. Perisic said they were trying to be aware of those who have special dietary restrictions, such as no pork or no meat.

While this is just the first event, Perisic wants to make it a yearly thing.

But it will not continue as a spring event. Although they are hosting the first one in April, Perisic said he definitely wants to turn it into a fall event.

Perisic said he has had classmates leave college because they didn’t have a support system or a community connection. Perisic is a Posse Scholar, a group of 10 students each year who receive a full-tuition scholarship. They come from various regions of the country and meet several times before coming to Centre College, enabling them to establish that support system.

Perisic said he knows the value of community connection, and believes that it would help a lot more students feel invested in the college.

“Those are leaders this campus needs. That’s the diversity we lack,” he said. “Diversity at this campus is on an uptick — let’s integrate that diversity.”

The B.C.D. 3v3 event will be 1-7 p.m. April 22 on the campus of Centre College. The basketball tournament and community conversation will be held at Sutcliffe Hall, while there will be games and inflatables on the lawn in front; community organizations will also be set up, but only the first 16 will be accepted.

Dinner costs $6; it’s free for those who participate in the community conversation, which will be capped at 300.

To sign up as a volunteer or community organization, visit B.C.D. 3v3 Community Event on Facebook. You can also email bcd3v3@gmail.com.