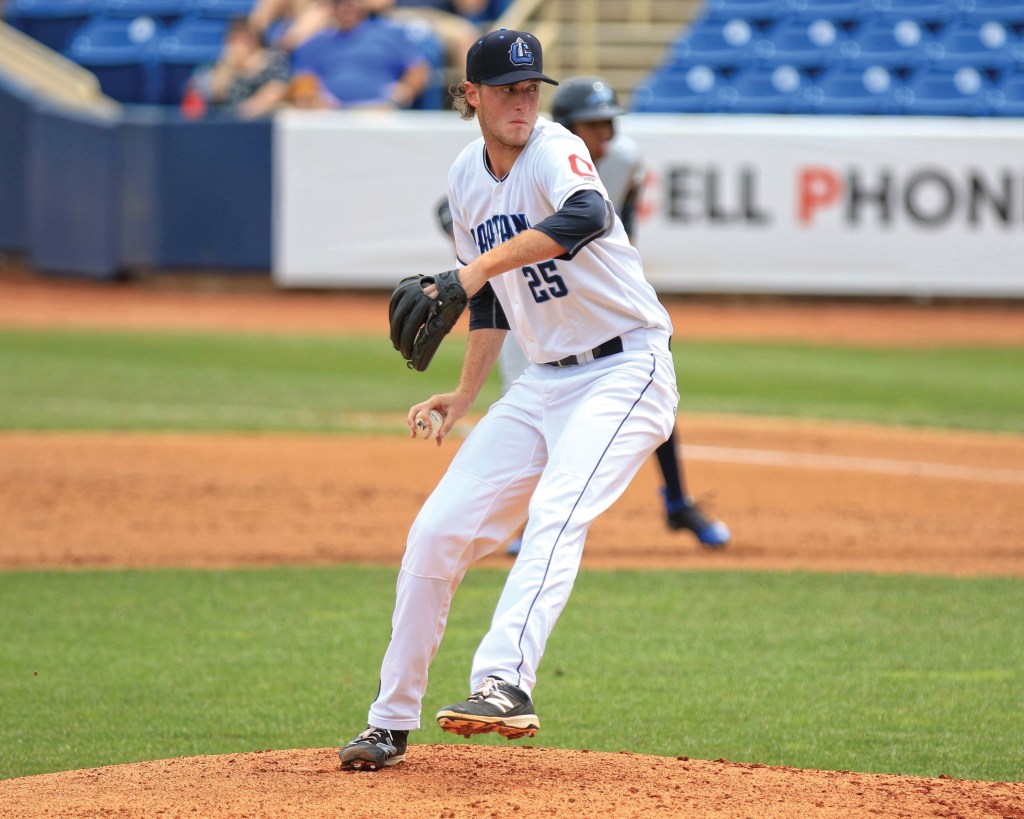 Photo by Tim Phillis, Lake County Captains team photographer/ Micah Miniard earned the start for Lake County in its opening game of the season on Thursday.

Blake Perry, Jacob Bodner and Micah Miniard are back on the diamond.

Two of the three will be starting their seasons in familiar places: Bodner is back with the Wilmington Blue Rocks (Delaware) and Miniard returns to the Lake County Captains in Ohio.

Perry, however, is on a different track. After the Arizona Diamondbacks decided to not extend his contract, he signed with the Seattle Mariners and has started the season with their AA affiliate, the Arkansas Travelers.

Both Perry and Bodner will start the season in the bullpen this year. That’s where Bodner was last year, finishing the season with 43 innings pitched in 27 appearances for Wilmington. Bodner started last season in Lexington, where he pitched 10 innings in seven games, earning three saves in the process, before moving up to Wilmington.

As a reliever, Perry said he’s prepared for the season differently.

“It’s different, it’s a little different mindset,” Perry said. “As a starter, you get a good routine. You pitch every five days, you know what day you pitch. Usually as a bullpen guy, nine days out of 10, you have to be ready to go. You have to go to the ballpark and be ready to throw in the game. It’s a little more work, keeping your body healthy. You’ve got to really take care of yourself off of the field, workout, conditioning, eating right.

“But I like it. It’s more chances to get out there and help your team win, put them in a good spot to win. As a starter you’re only out there once every five days. It’s just a different mindset but I’m getting used to it.”

Miniard started his season Thursday, pitching the Captains’ opening game in Dayton. He started last season in Mahoning Valley, a short-season team, tossing 34 innings in seven appearances. He moved up to Lake County and started eight games, breaking the 100-strikeout milestone for his career.

“It’s great, I kind of expected to be back here,” Miniard said. “I would say it helps out a lot, coming up here last year and having a feel for the area and stuff, getting settled in for the season.

Earning the opening-day start was a blessing for the Boyle County graduate.

“It’s definitely special. I’m excited by it,” he said. “You’ve just got to go out there and compete and everything. It’s just a blessing, great to have that chance to open in Dayton where they sell out about every game up there.”

Thursday’s game was shortened due to rain, and Miniard — rated by Scout.com as the Cleveland Indians’ No. 26 prospect — finished with three innings, giving up one run on three hits while recording two strikeouts.

Miniard said he isn’t focused on moving up in the Indians’ farm system but instead wants to focus on improving each time out.

“I just hope to have a good year, get some wins and some good quality starts in, go deep in games,” he said. “I want to do that more than I have in the past. I wouldn’t say goals like moving up is a big deal, just performing day to day is how you have to go about it. Just take it one day at a time.”

Miniard turns 21-years old next week but he’s one of a few “experienced” players on the Lake County team this season.

“I pretty much know everyone that is on the team,” Miniard said. “I think there’s four or five of us that have been here before and everyone else is new from Mahoning Valley, but I know them from my time last year at Mahoning Valley. I’m good friends with everyone on the team, we’ve got a great squad, a bunch of good guys. Everyone is in it to win, I feel like, not just playing for themselves.”

Perry said he’s acclimating well to Arkansas and the Mariners’ organization and is excited to prove what he can do playing in AA. 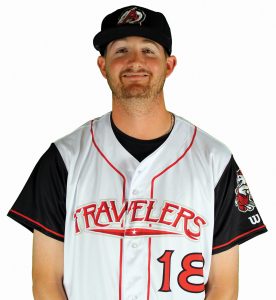 Photo courtesy Arkansas Travelers/ Blake Perry will pitch in the bullpen this season.

“I’m excited to be here,” he said. “It’s another opportunity to show not only the Mariners but everybody else that you can get outs at the higher levels.”

The switch to the bullpen is something that Perry said will work to his strengths — he has 503 strikeouts in 548 career innings.

“I like it. I’m a guy that likes to work quick and I like to get after it, throw the ball hard,” Perry said. “I think as a bullpen guy, I can get out there for 10-15 pitches and get after it and get off of the mound. I think it’s going to be good for me. But it’s hard to tell how well it’s actually going to go until I get out there and get settled in. But I think it’s going to be good, I’m enjoying it.”

Perry pitched in the Travelers’ first game of the season Thursday, replacing starter Andrew Moore in the seventh inning. He shut down five of the first six batters he faced, but was replaced with two runners on base. Both runners would score, giving Perry two earned runs in 1.2 innings pitched.

Perry said he’s not sure what role he will fill in the bullpen, but his versatility as a starter is sure to help.

“Versatility is always good, you saw it in the World Series, you had (Aroldis) Chapman and Andrew Miller, guys like that went multiple innings,” he said. “It’s good to be able to go out there and shut it down for an inning, but if you need to go into the sixth or seventh and hold them there, you can do that too. I think versatility is never a bad thing. Everybody on our team this year can go out there and get one or two innings. It’s just a different mindset, but it’s still 60 feet, 6 inches and you’re just trying to get the guys out.”

Whatever the role, Perry said minor league pitchers all want the ball in their hands as much as possible.

“It’s pretty much what you earn in minor league baseball at this level,” Perry said. “You go out and throw the ball well, they’re going to put you in tougher spots, tougher situations with the game on the line. But right now it’s just trying to get out there, get the feet wet and just get the 142 game grind going.”