A Danville man is facing drug charges after fleeing in a reported stolen vehicle Thursday night.

According to Danville Police Department, Officer Aaron Sparks located a suspicious vehicle in the area of Hill-n-Dale Drive at 11:48 p.m. Thursday and found that the 2012 Chevrolet Sonic had been stolen out of Lexington. The driver, Harlan P. Bivins, 36, of Danville, stopped the vehicle near Burckley Drive and fled the scene on foot.

He was soon located and taken into custody without incident and lodged in the Boyle County Detention Center.

Bivins has been charged with receiving stolen property of $10,000 or more; and second-degree fleeing or evading police.

After a search of the vehicle where drug paraphernalia and suspected heroin was found, Bivins was also charged with first-degree possession of controlled substance.

Bivins is lodged in Boyle County Detention Center with a bond set of $20,000 cash, plus separate bonds set through Fayette and Pulaski county courts. 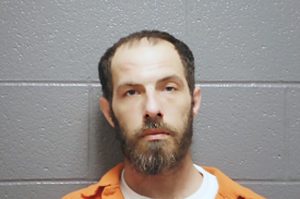