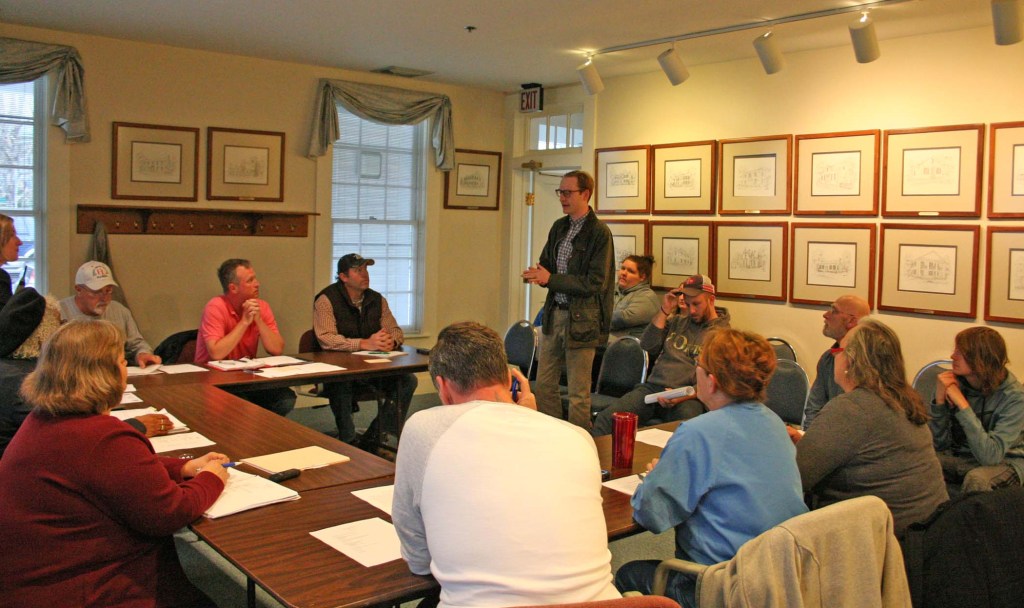 Kendra Peek/kendra.peek@amnews.com Attorney Winfield Frankel introduces himself to members of the Perryville City Council during Thursday's meeting. Frankel was appointed the city's attorney at the end of the meeting, to replace Lynne Dean, who resigned in February, staying on until a replacement could be found.

PERRYVILLE — A new attorney will be representing the city of Perryville, following a decision by Mayor Anne Sleet and the city council Thursday night.

Danville attorney Winfield Frankel, from the office of Helton, Walter and Associates, was approved as the next city attorney, following an executive session to discuss the matter.

“I would like to recommend that the council hire him as our city attorney,” said Sleet, explaining that she had met with Frankel before the meeting.

Frankel thanked them for the appointment.

Earlier in the meeting, Frankel introduced himself to the council, explaining he practiced in Danville.

“I’m interested in being the new city attorney. I know Mrs. (Lynne) Dean is leaving you all to be — she now is — the county attorney, she has a full plate,” he said.

Frankel is a Danville native. He attended the University of Kentucky to obtain his bachelors degree before going to University of Dayton School of Law, where he graduated in 2012. He began practicing in Kentucky later that year, at the office of Banks Hudson in Danville. Hudson retired in 2014, at which time Frankel moved to his current office.

In his job, he has interacted with city councils, the Danville City Commission and the Danville-Boyle County Planning and Zoning Committee, but this will be his first time in an advisory role, he said.

“There’s a couple of interesting issues that came up last night … It will be neat to explore the world of municipal law and governance,” he said. “It’s similar in that I’m looking out for the best interest of a client. There’s some similarities, but the area of law is narrower than my day-to-day practice, where you never know what’s going to come up,” he said. “I’m looking forward to working with the council, Mayor Sleet. The council is made up from a good group of people and I look forward to helping them tackle any issues that might come in front of me.”

Frankel and outgoing attorney Dean will meet in the coming weeks to continue the transition; Frankel will likely be in place by the next regular meeting, to be held at 7 p.m. on May 4 at the Perryville Community Center.