Rev. Charles Coleman Burress, 88, passed away Friday, April 7, 2017. He was born in Marion County, Kentucky on December 6, 1928, a son of the late Walter and Lois Blankenship Burress. Rev. Burress was also preceded in death by wives, Julia Rose Peterson and Lucille Ada Hoffman. 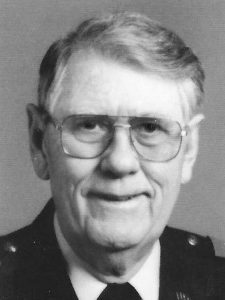 Charles was a United States Army Veteran having served during World War II and was a retired Baptist minister. He was a member of First Baptist Church Danville.

He also served as Chaplain in the Civil Air Patrol, was a member of the North American Mission Board, graduated from Southern Baptist Seminary and achieved his Doctorate Degree.

The funeral service will be 3:30 p.m., Sunday, April 9, 2017 at Perryville Baptist Church with Hospice Chaplain Brad King and Rev. Doug Davis officiating. Visitation will begin Sunday at 1:30 p.m. at the church. Private burial will be Monday, April 10, 2017.

In lieu of flowers memorial contributions are requested to Gideon’s International.