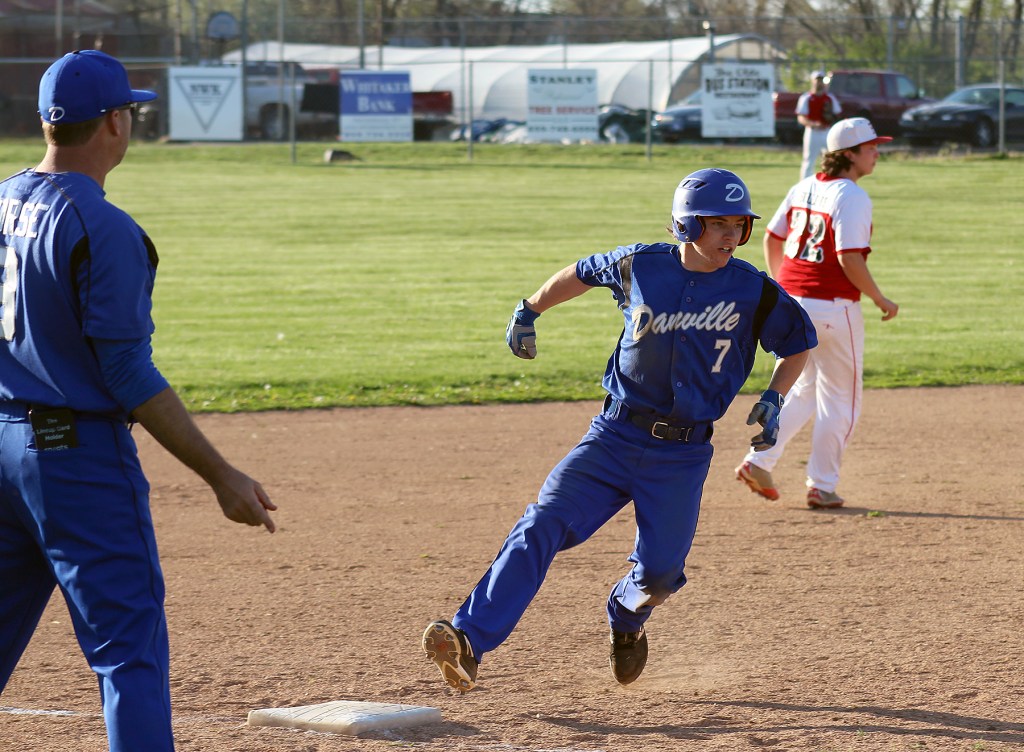 Mike Marsee/For The Advocate-Messenger Bric Mongeau of Danville advances to third base on a ground ball during the fourth inning of the Admirals’ 19-0 victory over Burgin on Monday.

BURGIN — Paul Morse could hardly wait for Danville to play someone, anyone. His team, however, was giving off a very different vibe before the game.

The Admirals were playing for the first time in six days and for only the second time in nine days after a spring break that was unexpectedly heavy on break and light on baseball. And not surprisingly, they lacked the intensity their coach was looking for when they took the field Monday at Burgin.

It took some time for them to sharpen their focus and shake off the rust, but they were eventually able to accomplish both of those things in a 19-0 romp.

Danville (8-5) cranked out 16 hits — 11 of them in an 11-run fifth inning that triggered the mercy rule — while starting pitcher Austin Mott and two relievers held Burgin (0-5) to three hits.

“It was good just to get back out on the field,” Morse said. “I didn’t care who we were playing. It didn’t matter, we just needed to play, especially before a big district game tomorrow (against Boyle County).”

The Admirals played two games April 1 in a Green County tournament that was abbreviated due to rain, and they had four games scheduled last week but played only once, losing at Mercer County in a game that was moved up to beat the bad weather.

The game was relatively close through three innings, as Danville led 4-0 — scoring two runs on a single wild pitch in the second — before breaking it open with a four-run fourth that included RBI singles by McCallum Morley, Mason Schroeder and Brian Baxa.

“For three innings we were in it. It was a 4-0 ballgame, and it really should have been a 2-0 ballgame except for that wild pitch. But we make errors, and we beat ourselves up on errors,” first-year Burgin coach Jeremy Noel said.

Noel, a former Boyle County standout who was hired just two weeks before the start of the season, said there were things from the early innings that the Bulldogs could build on.

“It’s been a little tougher than expected. I’m down to about 10 or 11 ballplayers now, and these guys have got to be mentally tough. I’m building mental toughness, and it’s taking a little longer than I expected. But I knew it was going to be a two- or three-year deal.”

Baxa had two doubles and a single and drove in four runs for Danville, and Schroeder had two singles and three RBIs. Jacob Crank and Brennan Washington also had two hits each for the Admirals in their first mercy-rule victory of the season.

Burgin starter Jordan Hurst allowed eight runs but held Danville to five hits over the first four innings, but the Admirals got nine runs and six hits off Cameron Hurst, who failed to retire any of the nine batters he faced in the fifth, and two runs and five hits off Jacob Burdine. 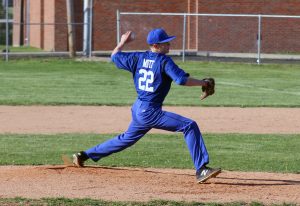 Danville’s Mott, a junior left-hander who had surgery two years ago after suffering a broken elbow, gave up singles to Jordan Hurst and Cameron Hurst and a walk in his three innings, but none of those runners got past second base and two of them were thrown out on the basepaths.

Noah Goodman pitched a perfect fourth inning, and Schroeder gave up a hit in the fifth before the game ended on a double play.

Burgin has scored only six runs in five games, but Noel said that’s not the area in which the Bulldogs the most work.

“I want to see our defense improve,” he said. “We’re putting the bat on the ball, but defensively we’re kicking it around and giving teams three or four runs. Then we settle down, and it’s too late.”

Boyle tennis improves to 5-1 with win over Casey