Driver delivers smiles to seniors through Fifty-Five and Alive program 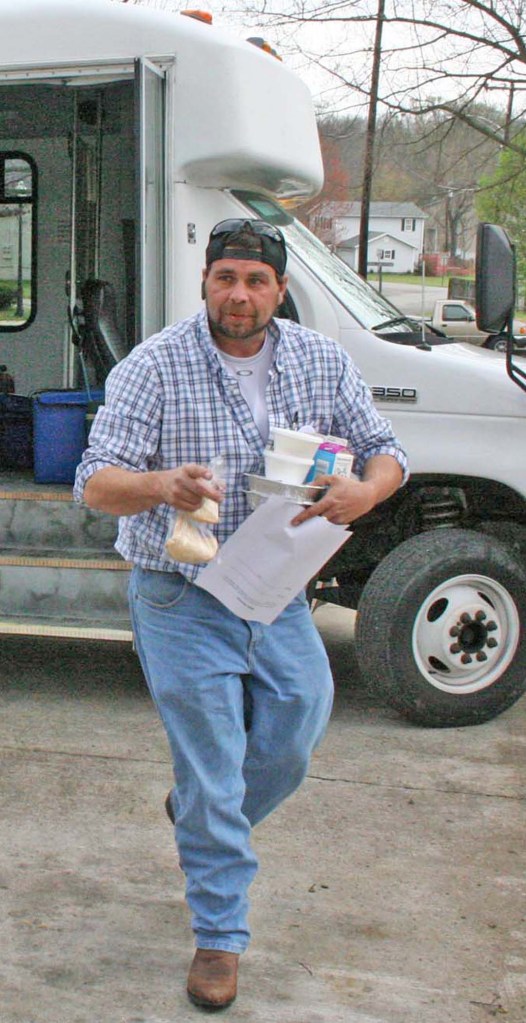 Kendra Peek/kendra.peek@amnews.com Kenny Griffith, Fifty-five and Alive driver, carries food to deliver to seniors as part of the center's meals on wheels program.

Bringing a smile to others’ faces is what drives Danville resident Kenny Griffith.

With that in mind, he drives others: Griffith drives a bus for the Fifty Five and Alive center, transporting seniors to the center at 975 Hustonville Road in Suite 23 at the Southland Shopping Center. He also delivers food to about 30 people who can’t get out as part of a Meals on Wheels program.

The 41-year-old calls it the “most favorite” job he’s ever had.

He said he tries to keep people smiling while he’s there at the center, where he helps in whatever way they need.

“If they need me to do something, I’ll do it. It doesn’t bother me,” he said.

Keeping those seniors he visits smiling is something else that makes the job so enjoyable.

“If they’re having a bad day, and if I can walk in and in three minutes, make them forget about that, I’m happy. That makes me happy,” he said.

Griffith’s story begins in Lexington, where his family lived for the first few years of his life. His brother is deaf, which prompted a move to Danville, so he could attend the Kentucky School for the Deaf.

His early life wasn’t easy, which is part of why Griffith works so hard to make others happy.

“I’ve got a big heart when it comes to people … I wasn’t happy a lot as a child. I don’t want to see people the way I was back then, especially children,” he said.

At 16, just after getting his license, Griffith dropped out of school to go to work. His dad, Ernest, had a medical issue and couldn’t work any longer.

“It was life,” he said simply.

Griffith was working when he was hit while driving a moped. It broke both of his legs, his nose and his jaw.

“I couldn’t walk for close to a year,” he said. “Luckily, thank the Lord, there was a nurse behind me when it happened and she came to be with me. 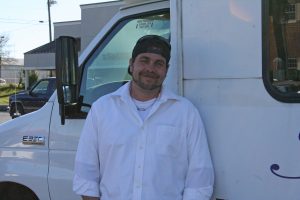 Kendra Peek/kendra.peek@amnews.com
Kenny Griffith, Danville resident, drives for Fifty Five and Alive and calls it the “most favorite” job he’s ever had.

After he recovered, Griffith returned to work. He eventually obtained his GED.

When he was young and his dad was still in good health, Griffith learned how to mow, helping the family patriarch as they mowed others’ yards.

When his dad was unable to continue, Griffith worked on their yards.

“I got my work ethic from him. He was always doing until he couldn’t,” he said. “He taught me everything I knew as far as working goes.”

Over the years working odd jobs, Griffith has held various full-time jobs, including working at a slaughterhouse for a few years; working at the Salvation Army for several years; and, most recently, working at the Hampton Inn, where he worked in maintenance.

“It’s probably her most favorite job she’s had for a few years,” he said.

He’s proud to be a father and grandfather, and always finds plenty of time to spend with the grandkids.

“I love my grand-babies to death,” Griffith said. “I’m their jungle gym.”

He said he’s not into hobbies much, but enjoys being able to do things for others.

“I’ve got everything I need.”

Griffith found out about the job driving for Fifty Five and Alive and said he knew it would be something he wanted to do.

“The ladies I work with — I think the world of them. They’re all good and they’ve been nothing but nice to me since day one,” he said. “That makes for a good working environment if all the employees are easy to get along with.”

“I’m just me. Most people know me as a nutcase,” he said, grinning. “I just want to see people happy.”

Transportation Committee could be useful to reconvene, P&Z chairman…