Wavie Snow, 92, of Upper Brush Creek Road, Hustonville, KY passed away Saturday, April 8, 2017. She was the widow of George Raymond Snow and was of the Pentecostal faith. 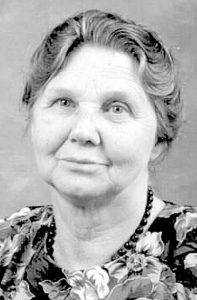 Services will be at 1 pm, Tuesday at W.L. Pruitt Funeral Home by Rev. Glenn Daugherty. Burial is in with Hustonville Cemetery. Visitation is 5- 9 pm, Monday.