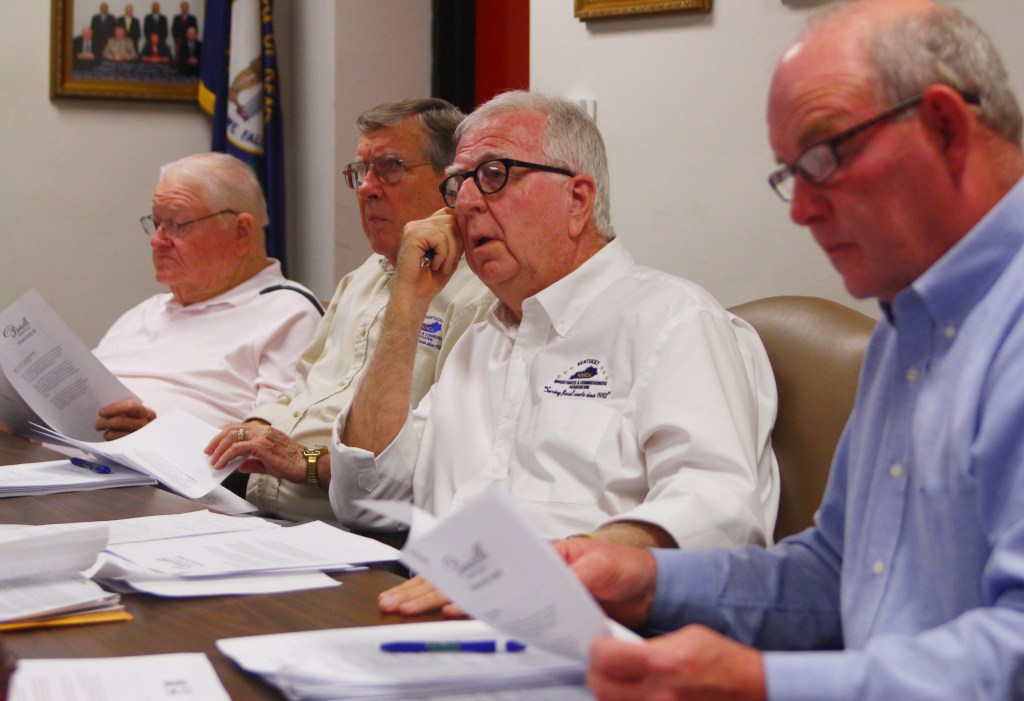 Ben Kleppinger/ben.kleppinger@amnews.com Magistrates John Caywood, center, and Jack Hendricks, second from left, participate in Tuesday’s Boyle County Fiscal Court meeting. Caywood made a motion Tuesday to have Hendricks sit in on a Planning and Zoning committee that is searching for a new P&Z director.

The Boyle County Fiscal Court has voted to put one of its members in the room with Planning and Zoning officials as they search for the next P&Z director.

“I move that the Boyle County Fiscal Court appoint Magistrate (Jack) Hendricks to be a non-voting member of the Planning and Zoning search committee effective immediately for as long as the present search committee is in place and until the hiring process for the new executive director is completed,” Magistrate John Caywood said during Tuesday’s meeting. “… This is a critical step in this community. Whoever has that job — it’s one of the first places that somebody goes to decide whether they want to come here.”

Magistrate Phil Sammons quickly seconded Caywood’s motion, but Judge-Executive Harold McKinney said before a vote was cast, he wanted to clarify the situation.

Planning and Zoning is setup by ordinance and it may not be the case that the fiscal court can appoint someone, McKinney said.

“I’m not going to argue — we can pass the thing, but I’m telling you I think it may be that he has to just sit in on that as our representative,” he said.

“I think that’s OK,” Caywood responded. “I talked to Magistrate Hendricks this morning and he has forcefully agreed to do this job. He’s enthusiastic about it.”

Caywood said Hendricks would serve as a “liaison” for the fiscal court.

“He keeps us tuned in” to the process of finding the next P&Z director, Caywood said.

McKinney asked Hendricks if he would be OK with that.

“I’m OK with it as long as everybody understands — I think everybody knows my feelings — I think this person ought to be hired full-time,” Hendricks said. “… I have some issues with the way they’re doing things. If I can’t say anything in those meetings, it’s not going to cause any problems. But if I can say things, it might cause some problems.”

Members of the Boyle County Fiscal Court and Danville City Commission have expressed displeasure with Planning and Zoning’s current four-day work week and said they want to be involved in the search process for the next director. Current Director Paula Bary is set to retire at the end of June.

At Danville City Commission’s meeting Monday night, City Attorney Stephen Dexter cautioned commissioners against trying to put themselves on the P&Z Personnel Committee in charge of the director search. Dexter said if the city wants to have someone participate in the process, it should be someone from the city manager’s office rather than an elected member of the commission.