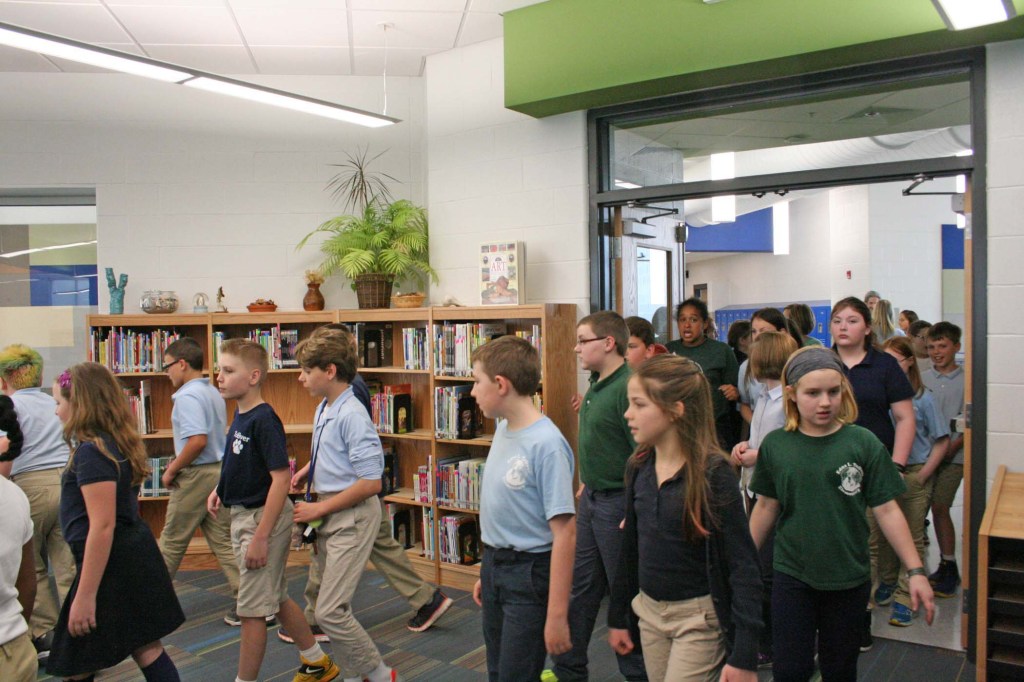 Kendra Peek/kendra.peek@amnews.com Students file into the library, called the Media Center, in the new addition at Toliver Elementary School.

Some Toliver students returned after spring break to new classrooms, as the transitions began while construction is ongoing in the building. A big thanks is owed to school employees, said Superintendent Keith Look during Monday night’s board of education working session.

Board member Steve Becker said he visited the school on Monday and that it was “phenomenal” to see how the kids were doing in the new space.

“The biggest thing I noticed was the absolute pride that staff has concerning the building. They always — whatever was given to them or demanded of them — they always dealt with that. Now we have something to really be proud of. Everybody, from custodians, to teachers — I was in the media center … the kids were enthusiastic, but nervous. One kid said, ‘It’s a long walk.’ I guess it is,” Becker said, laughing. “What I liked was, seeing the classrooms with stuff in them.”

Becker said he likes the way the rooms are set up and how they will be able to “direct instruction” to the kids and establish groups to work within.

Board member Lori Finke, who has a fourth-grader who goes to Toliver, said her son was excited about the round tables in the newly-completed cafeteria, compared to the long ones that the school had before.

“He just loved that they had round tables. He thought that was so nice,” Finke said.

Principal Ron Ballard said the day had gone well and that they plan to have a “soft open house” for Toliver parents soon. They will schedule open house events for the other schools, and the community, in the coming weeks.

“Everyone wants to be involved in it … They want to see it, too,” Finke said.

Demolition has begun on the third floor; when that level is complete, students from the second floor will be moved up.

The board also visited the discussion involving the mascot changes at the schools; Look asked the board if anyone had heard any reactions to the change that they wanted to discuss.

“The only talk right now has been the discussion about Bate. I would like to make sure we visit the discussion on that soon,” Becker said, referring to an alumni group who recently came forward expressing their disagreement with changing the Bate school’s mascot from the Bulldogs to the Admirals. The board decided in March to change all of the school mascots to Admirals, citing unifying the district as the reason.

Look explained that he and Glenn Ball, one of the Bate High School Alumni Association members, would be discussing it further, and Look would bring the matter to the board members. He commended them on making the tough decision.

“I think you should congratulate yourselves on working through a very difficult process and doing so in a way that folks were able to figure out, whether they agree or disagree, they at least understood,” Look said.

The next regular Danville Board of Education meeting will be 6 p.m. Monday at Danville High School.

BETTER HOLD IT: For now, restroom improvements at Millennium…