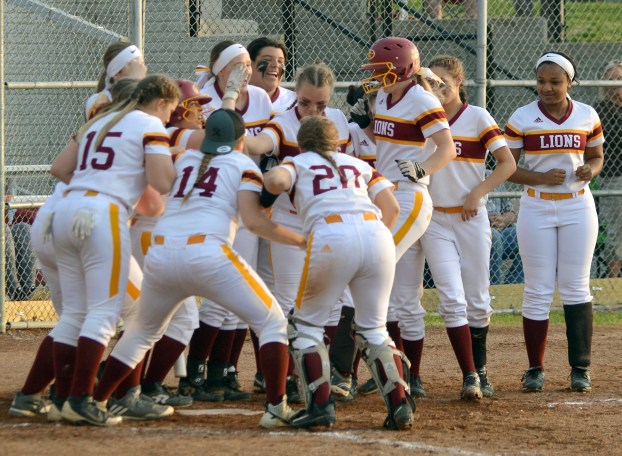 LANCASTER — Todd Montgomery hollered as Kesli Moss made her way around second base and into third, positioning himself right along the third base line to deliver a monster high five during Moss’ home run trot.

Maybe emotion got the better of it, the Garrard County softball coach nearly missed on his aim. But that was just about the only thing anyone in the home dugout missed Wednesday night.

Moss and Sam Adams drilled home runs and Kelsey Perkins handled Boyle County from the circle, leading the Golden Lions to a 7-4 win in the 45th District on Wednesday.

The two teams had faced each other nine times in the previous four seasons, including four straight district tournament championship games, and Boyle had won seven of those meetings and all four championship game matchups.

So it was understandable the Lions’ celebration as Perkins set down the last six batters she faced to preserve the win.

“It’s a big win any time you beat Boyle County, and I think Boyle County gets up for us,” Montgomery said. “It’s a big rivalry. We’ve had some good games over the last three or four years. Our girls get up for big games.”

It was only the second loss in the last six games for the Rebels, who fell to 8-6 overall and 0-1 in district play. But it did snap a streak of 13 straight wins against district opponents, a span which reaches back to a 7-3 loss to the Lions three years ago.

“It’s always been a pretty emotional game … but since 2014, it’s been a little bit more intense,” Boyle coach Brian Deem said. “It’s a lot of fun. I knew they were going to be excited and my kids were excited. Todd did a great job, his kids were able to put the bat on the ball and we made some defensive mistakes which put runners on base.

“This loss doesn’t go down to one big play. All around, they made all the right plays in the right spots.”

Garrard took a 2-0 lead into the fourth inning, but Boyle’s Gracie Edmiston changed all that with one swing, crushing a two-run home run over the left field fence to tie the game at 2-2. And after Garrard retook the lead at 6-2 in the fourth, Edmiston laced a double down the third base line for two more runs and a 6-4 game. 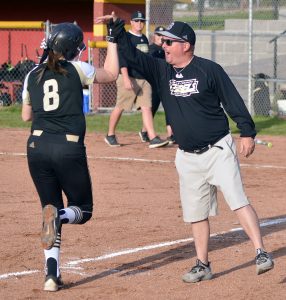 Jeremy Schneider/jeremy.schneider@amnews.com
Boyle’s Gracie Edmiston is congratulated by coach Brian Deem after her two-run home run in the fourth inning tied the game.

Edmiston finished going 2-for-3 with four RBIs and one run. Katy Grace Chadwell and Channing Whitehouse also had two hits each, but the rest of the Rebels lineup went 3-for-18 (.167).

“Kelsey missed her spot on both pitches, and Gracie did a good job of punishing the ball,” Deem said. “I’ve got too many kids on this team who can hit consistently like that and we just didn’t do it today.”

After Edmiston’s bomb tied the game, Moss had her two-run homer and Elle Montgomery had a two-run double for the 6-4 lead. Adams’ solo shot just over the centerfield fence came in the sixth inning.

Adams finished with a 3-for-4 night at the plate, scoring twice and driving in a run. Montgomery, Olivia Saylor and Moss each had two hits. Moss had three RBIs and two runs, Saylor scored twice, and Montgomery drove in a pair.

Maybe more important than the hits were the strikeouts — Garrard only struck out once facing Boyle’s Chadwell.

“One through nine, they all made good contact,” coach Montgomery said. “That’s key for our batters, you make contact, you put pressure on the other team.”

Chadwell allowed 11 hits and no walks, and six of the seven runs were earned.

Perkins walked two batters and surrendered nine hits, but she struck out five.

“We missed two pitches, one for a home run and one down the third base line,” Montgomery said. “Kelsey did a great job, hit the spots we wanted, kept them off balance. She’s done that all year.”

Both teams are right back at it tonight as Garrard hosts Mercer County, and Boyle continues its 45th District schedule at Lincoln County. The Lions travel to Danville on Monday while Boyle hosts the Admirals on Wednesday.

“The good thing about this is its April 12th not the last week of May,” Deem said. “It is what it is, and we need to make sure we get ourselves ready to go because we’ve got another district game on the road (today at Lincoln County). I want them to understand this is what you’re going to have to do in the district and the region; the difference is you can’t lose the first one.”

Cry after your last game

EDITOR’S NOTE: The Advocate-Messenger approached area high school spring sports coaches about writing a column for publication. This one from... read more