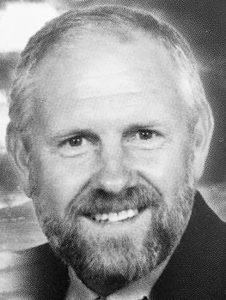 Ronnie was preceded in death by his mother, Betty Tuck, and a brother Donald “Pete” Peters. Ronnie was a retired conductor for Norfolk-Southern Railway Co. He was an ordained Deacon and faithful member of many years at Immanuel Baptist Church who enjoyed serving God. He led nine mission trips to Haiti, was a long-time Sunday School teacher and worked in the food pantry.

Ronnie witnessed to all he came in contact with and he will be remembered especially for his God given gift of singing for the Lord. Ronnie was the example of a wonderful husband and father and friend. The love of family and his God were #1 in his life. For years, Ronnie’s last words to everyone were always “Can I ask you a personal question? Are you a Christian?”

The funeral will be 1 p.m., Thursday, at Immanuel Baptist Church, 1280 Faulkner Lane, Danville. Rev. Ernest Martin, Rev. Andy Mikels, Brother Jimmy Hazlett and Brother Morris Trayner will officiate. Visitation will be 4 to 8 p.m., Wednesday, at Immanuel Baptist Church, Danville, Ky. and 11 a.m. to 1 p.m. Thursday prior to the funeral service. Interment will be in Bellevue Cemetery.

Gifts in memory of Ronnie can be made to Immanuel Baptist Missions in care of Immanuel Baptist Church, 1280 Faulkner Lane, Danville, KY 40422 or The Gideon’s International. The online guestbook is available at www.stithfuneralhome.net