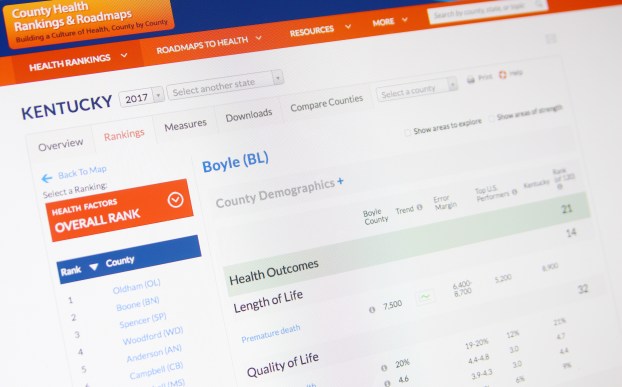 Ben Kleppinger/ben.kleppinger@amnews.com Boyle County’s health rankings — according to The County Health Rankings & Roadmaps released this month by the Robert Wood Johnson Foundation — improved somewhat compared to the rest of the state.

The rankings grade every county in the U.S. in two major health categories — “health outcomes,” which is focused on quality of life and length of life; and “health factors,” which takes into account a wide variety of health indicators, including obesity rates, drug and alcohol use, and educational attainment.

• Casey County was 81st in outcomes and 99th in factors;

• Garrard County was 64th in outcomes and 54th in factors;

• Lincoln County was 79th in outcomes and 77th in factors;

• Marion County was 56th in outcomes and 27th in factors;

• Mercer County was 34th in outcomes and 30th in factors; and

• Washington County was 11th in outcomes and 18th in factors.

That was unexpected for Boyle Health Department Director Brent Blevins, who said he anticipated Boyle being better than the state in those categories. Boyle County has a lot of excellent parks and natural areas that feature walking trails and bike trails. There are a lot of groups in the area who make an effort to stay fit and help others get physical activity, he said.

“It’s surprising to me in the community of Danville and Boyle County that our inactivity is so high,” he said.

Blevins said Boyle’s obesity rate is “concerning.” Top performing communities in the U.S. have obesity rates of about 26 percent, which is well below Boyle’s 32 percent, he said.

There are plenty of bright spots in the findings for Boyle, however. Blevins pointed out a few that stood out to him:

• Alcohol-impaired driving deaths are rarer in Boyle County than in Kentucky as a whole. An estimated 17 percent of driving deaths in Boyle County in the most recent year data is available — 2014 —involved alcohol intoxication. The state average for the same year was 28 percent. Blevins said the Boyle County Agency for Substance Abuse Policy and local schools should be credited with helping on that statistic. “In the last couple years in particular, I think a lot of word is starting to get out to a lot of people about no drinking while you’re driving,” he said.

• Boyle’s high school graduation rate is 95% — right in line with the top performing areas in the entire nation. Kentucky’s average is 89 percent.

Blevins said he’s not sure what could be driving that statistic. It’s not a statistic affected by the current opioid drug epidemic, which has put Boyle County at risk for an outbreak of HIV or hepatitis C among injection drug users — that’s a different problem not measured by the figure in the health rankings.

It’s possible that Boyle County’s STI rate actually looks worse because other counties may not report their statistics as fully or accurately as Boyle does, Blevins said.

“I think that’s a positive for us because it means we have a truer number,” he said.

The 2017 County Health Rankings and Roadmaps program is a project of the Robert Wood Johnson Foundation and the University of Wisconsin Population Health Institute. Rankings for all states and counties in the U.S. going back to 2011 are available online at countyhealthrankings.org.

Old Montgomery Steakhouse to be transformed into senior community