Reed Howard Hartner, born August 19, 1981, in Cincinnati, Ohio, died April 7, 2017. Reed was a resident of Danville, KY and had lived in Garrard County from which he graduated Garrard County High School. 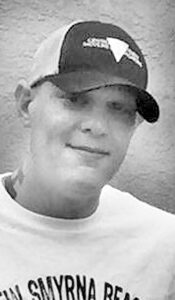 In his youth, Reed was a “select” soccer player, a baseball player and basketball player. He continued his interest in playing basketball into his adult life.

Reed was passionate about water sports and all things “Herrington Lake”. Reed’s chosen career was as a welder/metal fabricator.

Reed is survived by his wife, Whitney Hartner; a loving sister, Heather Waters and her daughter Olivia; and his forever parents, Sandy and Roger Hartner of Danville, Ky.

Reed was known to have a kind and giving personality and will be greatly missed by all who knew him.

The memorial service will be held at 2 p.m., Saturday, April 15, 2017, at Stith Funeral Home in Danville, KY. Officiated by Rev. Jim Stewart. Visitation will be 1-2 p.m. Saturday.

The family suggest donations to Circle of Hope, in care of Hope Network, Inc., P.O.Box 192, Danville 40423. The online guestbook is available at www.stithfuneralhome.net.