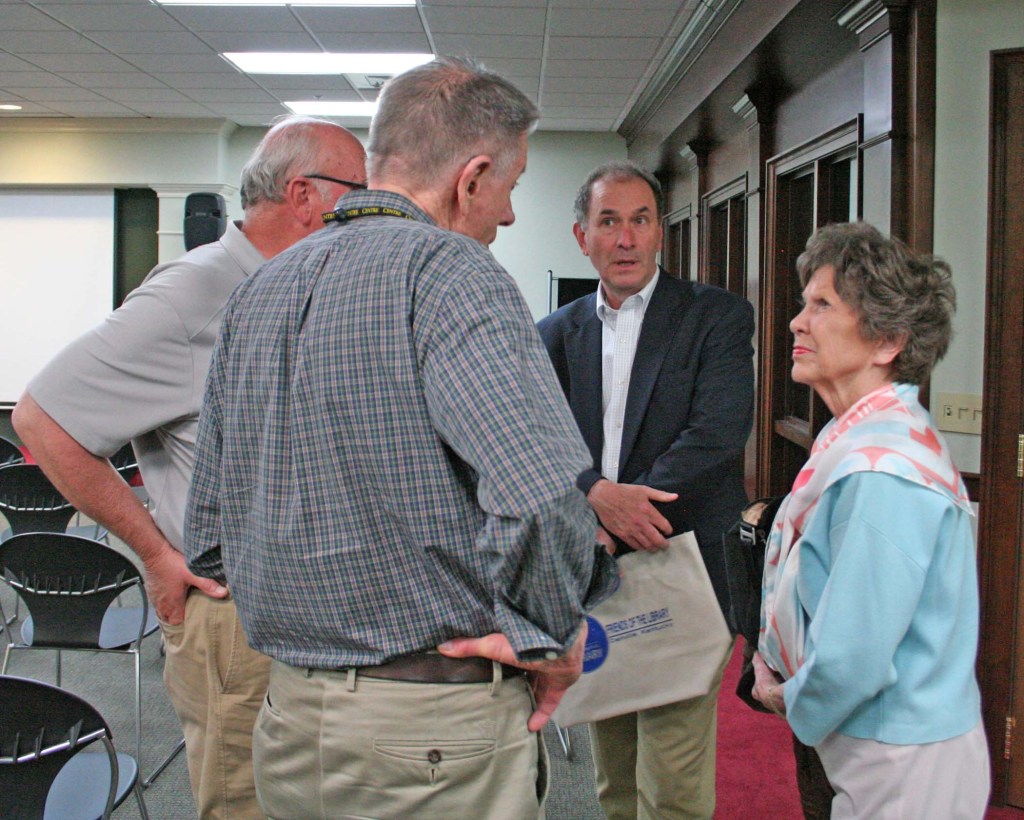 A Kentucky man whose name is synonymous with story-telling took time out of his schedule recently to share some of his “best of” moments from the years to a group at the Boyle Library.

Tom Eblen, Lexington Herald-Leader columnist, presented “My Travels Around the State,” just a little something he says he cobbled together from his adventures writing here and elsewhere, based on his interactions with people and their communities.

“I have civic groups all around ask me to speak, and someone from the library reached out,” Eblen says, adding he was happy to do it. One of his daughters graduated from Centre College, so he’s no stranger to the town. “It’s beautiful there, I like visiting.”

His daughter — Shannon — went into the fashion industry but took a turn into journalism, Eblen says, and is now writing for a newspaper in New Jersey. When asked if he thinks the ink runs in her blood, he says, “I guess so — she’s very, very good at it.”

Eblen grew up in Lexington and graduated in 1979 from Western Kentucky University, after having interned two summers at the Associated Press’ Louisville bureau. He became AP’s Knoxville correspondent in ’81, and joined the Atlanta Journal Constitution in ’84.

“All that was back when newspapers had a lot of money,” Eblen says. “We did a 48-page special section each day  — every day — over the course of the ’96 Olympics in Atlanta….”

“That was the longest month of my life …”

But what most know him for locally is his time with the Herald-Leader, which began in 1998 and is still going strong. He was managing editor until 2008, when he became a columnist.

“Being a columnist — it’s a great job. You write about what you want, can do a combination of opinion and features,” Eblen says.

“The Derby, Fancy Farm – I write about people watching sometimes. Shooting pictures up in the dome at the state capitol …”

Eblen has written a lot of words over his lifetime. One instance where he forgot about a story is pretty close to his heart.

“When I covered the last of the big steamboat races, before the Delta Queen had to retire (in Louisville) …” Eblen says it was the last year the race was being held for the Derby. “Turns out, the guy who’s the captain of the steamboat that day was retired, but he came back to make the last run. Back when he first started out in 1984, I’d done a feature about him for the Atlanta paper.”

Eblen had forgotten about the feature, until he’d stepped on the boat that day — and found out it was being skippered by none other than Captain Mike Fitzgerald.

“And this may have been against some safety regulations, I’m not sure, but I got to go up to the pilot’s house (at the top of the largest deck of a boat) for the race. That was a lot of fun,” Eblen says. And yes — it made for amazing photos.

These photos from all the unusual places serve as sort of the backbone of his presentations, at times. He has more than he can count, collected over the years — frames shot during hard news, Olympic coverage, in-depth feature stories about interesting but quiet people he chose to focus on and give a voice to.

Another oldie but a goodie, Eblen says, is when he found some truly, truly old bourbon.

“My wife’s great-grandfather owned a bourbon distillery called Old Barbee. It kind of went under during prohibition,” he says. His mother-in-law kept a bottle of the bourbon in her China cabinet, which finally made its way to Eblen and his wife. 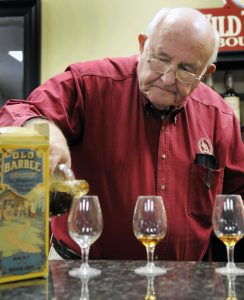 (Photo by Mollie Eblen) Jimmy Russell, master distiller at Wild Turkey distillery since 1966, prepares to sample a bottle of Old Barbee bourbon, distilled in 1901 and bottled in 1914. Despite all those years in the bottle, Russell pronounced it excellent.

It had been distilled in 1901, so he took it to some pros to find out what to expect. “I was told, ‘It’ll be as good or bad as when it was when it was put in the bottle.’ So I took it to Jimmy Russell, longtime master distiller at Wild Turkey. We all tried it, and were surprised. Russell was really impressed with how good it was. I was impressed.”

“It’s a really tough situation,” Eblen says when asked about the current state of the newspaper industry. “Many newspapers have a lot of readers — as many as they’ve ever had. But it’s mostly online, and there’s no way to make money. Such a decline in advertising, and newspapers are caught in this middle area. No one’s really figured out a good online revenue model. We still have this legacy printing, with all of the costs associated. It’s a really hard environment to try and do journalism when you don’t have the revenue.”

“There’s a lot of junk and bad journalism out there. Most of it on the right, but some on on the left. I think at the end of the day, people will trust reliable news sources. There’s always been bad journalism, it’s just that now with the internet and cable TV, it’s easier to pull out. I think the Trump administration, so far, has been a wake-up call for people to value quality journalism and real news, instead of TV entertainment.”

Eblen says his presentation wasn’t coordinated to announce anything, such as a possible book in the making.

“But I do need to sit down and on focus on putting together a ‘best of’ with my columns. I stay so busy writing for a newspaper, I never seem to make the time to sit down and do it,” he says. “I’d say within the next year or so, I hope to get all of that together and release a self-published book.” 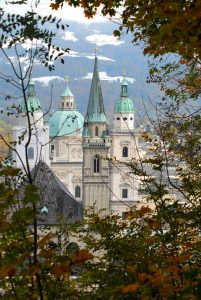 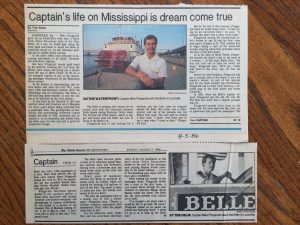 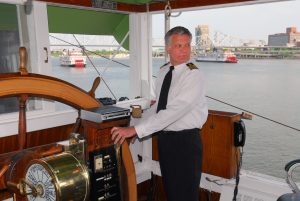 Mike Fitzgerald, a retired Belle of Louisville captain, pilots the boat as it lines up to start the race with the Belle of Cincinnati, left, and the Delta Queen, right.
Photo by Tom Eblen