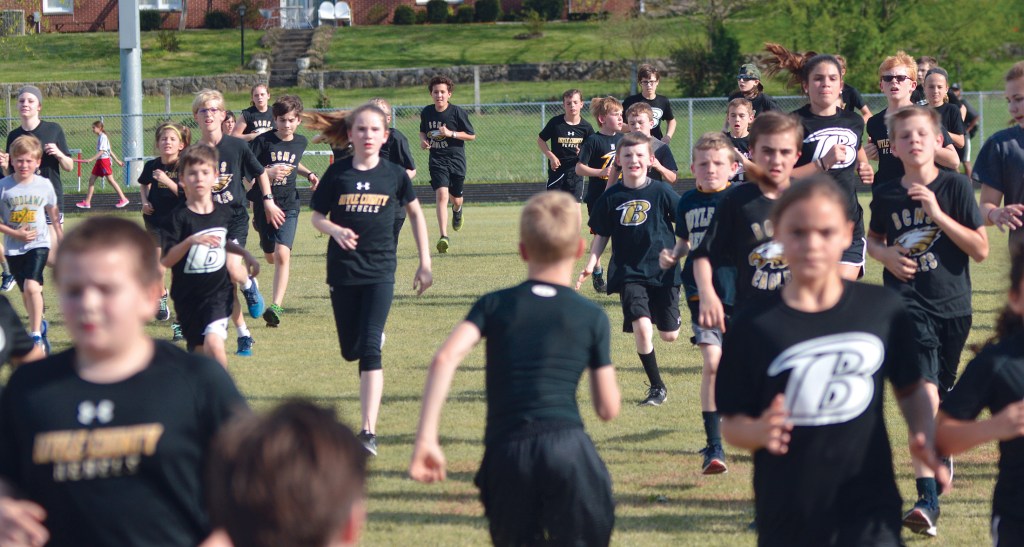 When Brent Wagner began thinking about starting a track team for Boyle County elementary school students, the first and only name he stuck on as the coach was Natalie Perry.

“I had the idea first and then she was definitely the first person I thought of when she got hired at Woodlawn,” Wagner said. “She can recruit those kids over there. … She’s very high energy. She’s positive, but when she was an athlete, she was a worker. She was a competitor and a worker. I wanted those attributes to be instilled in those young kids.

“Regardless of how fast you can run or how high you can jump, a life lesson is the work ethic. It doesn’t matter if it takes you five minutes to run the 100-meter dash, as long as you have the work ethic, that’s going to take them farther than if they break the school record and don’t have that work ethic.”

It’s the perfect fit for Perry, a 2011 Boyle graduate, putting her love of teaching elementary school children together with her passion for the sport.

“I love elementary kids … and the fact that I get to still be a part of a sport that I loved in high school and could have gone on to do in college, it’s just awesome,” she said, “it gets me pumped up and excited to get young kids excited about running instead of dreading it.”

With youth sports flourishing in other sports, Wagner wondered why not track and field. He approached the administration at Central Office and presented his plan to the school board and got approval.

Perry, a third grade teacher at Woodlawn Elementary School, and middle school coach Chrys Jones sent information through the schools in the winter and set up an informational meeting for parents in late February.

Her hopes were to have maybe 10 kids from each grade show up. But at that meeting, it was standing room only, and at their first meet in Mercer County last week, the elementary school and middle school roster totaled over 100 students.

“My first goal honestly was let me get a good sized group going,” Perry said. “At that first practice I had over 70 kids, and now our roster is over 100 kids and 75 percent of those are elementary. My first goal is complete. I’ve had a good turnout.

“It’s not just Woodlawn. Perryville and Junction City kids are coming, and that’s awesome that Boyle County is already invested.”

Wagner said, “At that first practice, we had a ton of kids and I thought maybe half of them will stay. But the numbers are consistent every time.”

Perry points to Wagner’s arrival as the start of track taking on a bigger importance at Boyle County. She traces the support the elementary and middle school teams have received back to that.

“When I ran in high school … track, yeah, you did it, yeah, it was fun, but when he took over, my mentality changed,” she said. “He was like, ‘We’re going to get better out here, we’re going to have fun at it, and we’re going to win.’ He took the expectation for track to the next level.

“The fact that I’m getting that much support is amazing.”

From the beginning in the parent’s meeting, Perry made it clear winning wasn’t the sole focus. Sure, everyone wants to win and it would be great, but they are more focused on shaping athletes and getting them involved with the sport.

“I want them to know, ‘Hey, I’m a good runner,’ or ‘I’m a good long jumper,’” Perry said. “It’s more having fun and getting them excited. Winning is awesome, winning will be important down the road, but as an elementary kid, it’s more important to be active.

“Today, we are fixated on if you’re not first, you’re last. It’s not necessarily all about that. As an athlete, you can’t be expected to perform at the highest level when you’re not taught the basics.”

The elementary age kids aren’t participating in hurdles and won’t do any field events except long jump, but they competed in most of the running events in Monday’s meet at Mercer County.

And from the start of practice in March to that first meet, Perry has already seen the elementary athletes improve by leaps and bounds.

“I know that I’m not going to be able to teach them how to hurdle or high jump quite yet,” she said. “I’m more worried about running form, getting them exposed to it.”

That idea of simply getting kids to participate is important to Wagner as well.

“Not every kid breaks school records,” he said. “A lot of them just want to be a part of it. At the end of the day, if that’s what we can give that kid for the brief time he’s with us, that’s fine. … At the high school level, we make just a big of a deal out of the kid scoring sixth as the one scoring first. Points are points.”

Perry was one of the first high school athletes Wagner coached when he came to Boyle in 2011. She was a member of the 4X400-meter state champion team in his first year, also a member of two regional championships.

“She still holds the school record in the 4X4, so it’s special that she’s a part of this,” Wagner said.

But even if there aren’t any future state champs in the bunch, that doesn’t diminish what Perry is trying to do.

And if you want to find her at Monday’s meet, just look for the swarm of kids. She’ll be in the middle.