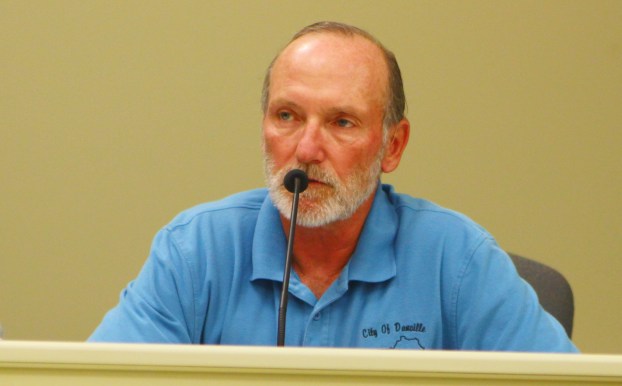 Ben Kleppinger/ben.kleppinger@amnews.com Danville City Commissioner Rick Serres said trying to determine the level of funding for community agencies prior to looking at a budget for the city’s core services feels like putting the “cart before the horse.”

Danville City Commission has reviewed the results of its grading process for community agencies that want city funding, but no decisions about that funding have been made yet.

Commissioners were in unanimous agreement that they want to make sure the city’s budgetary “needs” are taken care of before deciding how much is available for “wants” such as community agency funding.

“It seems like we put a lot of focus on the agencies — and certainly the shared ones, we need to,” Commissioner Rick Serres said, referring to the four partner agencies — the Economic Development Partnership, Planning and Zoning, Parks and Recreation, and the Danville-Boyle County Airport — that are jointly funded agencies between the city and Boyle County.

“But it almost seems as though you ought to take care of the house first and see what our needs are, not our wants,” Serres told City Manager Ron Scott at a Thursday special meeting of the commission. “Then you (Scott) tell us what kind of money we have to be able to (give) out. It seems like we’re kind of doing this cart before the horse.”

“Since it’s under your purview to bring a balanced budget to us, I would look to you for a total that fits, rather than the other way around,” Caudill told Scott.

“I don’t disagree with those perspectives,” Scott responded, noting that the current setup of determining agency funding at this stage in the budget process has been in place for years.

Scott said if the commissioners want to wait on a decision until numbers can be more firmly put in place, “I can do that, I am willing to do that, I am very apt to do that and it is my responsibility to do that.”

“It is difficult — and I get this — for you to make a decision if you don’t really have a better sense of revenue and essential needs being met,” Scott said.

Scott presented commissioners with a spreadsheet showing the recommended funding levels for 21 community agencies and the four partner agencies. The level of support for each agency was based on scores the commissioners gave during a day-long meeting with every agency in March.

The numbers produced by the formula are only for informational purposes — commissioners can use them to guide their decisions or ignore them entirely. Highlights from the formula-based figures include:

• The Danville-Boyle County Senior Citizens Center and the Great American Brass Band Festival had the largest suggested decreases in funding among community agencies: The formula suggested $58,887 in funding for the senior center, which requested $66,500; and $26,304 for the festival, which requested $32,000.

• While no one would receive the full requested amount, multiple agencies that requested increases above what they received this fiscal year would see their allocations rise. Those include the Arts Commission of Danville/Boyle County, Big Brothers Big Sisters, Bluegrass Community Action Partnership, Boyle-Mercer Helping Hands, Family Services, KyADAPT and the Nursing Home Ombudsman program.

• Grace Café, which tried twice last year to receive community agency funding from the city and was denied, would for the first time receive funding under the formula’s suggestions of $13,280.

Scott emphasized that the formula is just that and serves only as a guide for city commissioners. The final amounts allocated could be entirely different.

Scott also provided a “suggested amount” column on his spreadsheet that rounded every agency’s funding to a round number and built in additional funding for the EDP in anticipation of that agency’s plan to implement new economic development strategies. That “suggested amount” list totals $729,400 — an increase of 9 percent over this year’s allocations. Essentially the entirety of that increase is found in the addition of $100,000 for the EDP, Scott said.

Commissioners told Scott they want him to bring back a proposed budget that provides for all the city’s essential services and capital expenses and then allocates proposed amounts to agencies out of the remaining money.

“If money wasn’t an issue, then we wouldn’t have to have this conversation,” Caudill said. “But if it is an issue, then … I think we have to meet our needs first and go from there. Personally, I wouldn’t know what to tell you tonight.”

“I really felt for the last couple years that we do kind of do this backwards with doing there (community agency) allocations first, without really knowing what the big picture is,” Commissioner Denise Terry said. “It’s easy in March to say, ‘oh yeah, we’ll give you money.’ But when it really comes down to the nuts and bolts of it, we need to make sure that we allocate that amount of money correctly and maybe we need to cover some of our needs instead of our wants.”

Serres said the commission does not want “to cut anybody severely.”

“But I think we want to weight it better, make sure that some of the folks that really need us are getting taken care of and understanding we only have so much money to work with.”

• the number of citizens who benefit from the services;

• the impact on quality of life for Danville citizens;

• whether the program duplicates what other programs are doing;

• whether the applicant has also applied for funding from Boyle County; and

• the importance of the program to the local community.

Those scores resulted in the following suggested amounts, which are not official and only intended as a guide for commissioners. Each suggested amount is listed along with the current year’s funding level and the amount the agency requested for the next year:

JUNCTION CITY — For the second year in a row, a group of Junction City Elementary students have qualified to compete... read more