It is obvious how much the students enjoyed the work and energy devoted to the conference. Leahey explained, “For two and a half days, we worked hard to avert a nuclear holocaust, stop World War III, and resolve a cyber-attack on the United Nations. It was a blast.”

The hard work paid off as they brought home several awards. Boyle won the Outstanding Resolution award. Talha Muhammad was recognized for his work with the Best Speaker award and Chance Naylor won the Outstanding Delegate award. Leahey recognized the team effort that was involved in the big project. “Every single person in our Y Club absolutely went above and beyond preparing for and participating in the KUNA conference.”

Quesenberry nominated for FFA state office
By Laura Nolan
In her four years at Boyle County High School, Cori Quesenberry has dedicated much of her time and energy to FFA, a national organization that supports and promotes agriculture. This year she has been chosen as one of two Bluegrass Region candidates for a 2017-2018 Kentucky State FFA Office, a paid position given the year after graduating high school. It is a significant honor that few receive. 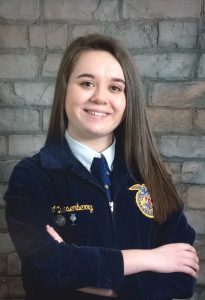 In March, Quesenberry was chosen as a candidate based on her ability to conduct herself professionally in interviews, to maintain leadership roles, and to be strongly committed to the organization. “Joining FFA was one of the best decisions I’ve ever made. It means understanding the importance of agriculture and advocating together for that importance.”
Photo by Holifield Photography
Quesenberry is thankful for the opportunity and recognizes those who have helped her along the way. “My FFA advisors, (Matthew) Whitaker and (Toni) Myers, instilled a passion for agriculture in me during my freshmen year. They’ve been there to help with anything they could over the past four years. Without them I wouldn’t even want to run for state office, much less have gotten out of the region.”
Though she is sad to be leaving FFA as a high school member, being a Kentucky State FFA Officer has been a dream for hers since she attended her first state convention in 2014. “Being a state officer means getting to show people what you love on an even bigger scale. I would love the opportunity to travel the state while advocating for the organization I’ve grown to love so much.”
A Bosnian background blesses Starcevic’s life
By Emma Nolan
Senior Ana-Maria Starcevic comes from a background that most people would find unfamiliar. A life-changing decision made by her parents to leave their European homeland has created a unique experience for their daughters. 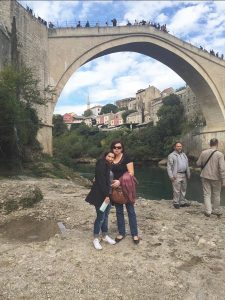 Photo by Blanka Franjic
Ana-Maria Starcevic stands with her Aunt Tatjana Franjic in front of the Stari Most bridge in Mostar, Bosnia.

Margareta and Muharem Starcevic escaped to Kentucky as Bosnian refugees 20 years ago because of the horrific Bosnian genocide, which killed more than 100,000 people. “My parents were just trying to make a better life for us,” shared Starcevic.

While born and raised in Danville, the curiosity of her family’s culture prompted Starcevic to want to visit Bosnia. Therefore, she made arrangements last October to travel alone to meet her parents’ families in the restored country.
The trip consisted of spending time with relatives and exploring her family’s history along with visiting the cities of Mostar, Sarajevo, Trnovo, and Zavidovici. “I went to visit all the family that I was never able to meet because I was born in America. I also saw many famous landmarks and got to see what Bosnia may have looked like before the war.”
Starcevic found the European country to be breathtaking, and learned more about the Bosnian culture that has positively influenced her American life.
Starcevic’s parents have always worked to keep their traditions alive. “We still have the traditional Bosnian food, and my parents continue to speak the language with me.” She finds these traditions to be a major part of her life, and plans to continue practicing them with her own children.
While truly thankful to live here in America, Starcevic loves being able to blend both cultures into her daily life. “I think that I’m more accepting of other cultures, and with my Bosnian background I get to experience a unique American lifestyle.”
Even though Starcevic never lived in Bosnia herself, she is happy that her parents made the difficult decision to uproot the family. “I don’t know if we would be where we are today if my parents didn’t choose to come to America.”
The efforts made not only by Starcevic’s parents but also her migrant grandmother has helped her grow into a strong young woman not willing to succumb to challenges. “When my parents and grandmother came to America, they were all working so hard to give me and my sister a life, and they really taught me the Bosnian ideals.”
Currently, Starcevic is planning on working in the medical field just like her mother. She will be attending the University of Kentucky in the fall in pursuit of a nursing degree.
When asked if she would like to move to Bosnia in the future, Starcevic responded with love for both countries. “I’m more accustomed to living here in America and life is very different in Bosnia, so I feel that I will stay here my whole life. However, I’ll never stop living as a proud American and Bosnian.”
She does hope to travel there again with her parents and older sister once she graduates high school. Being back in their European homeland together is a dream that Starcevic is hoping to soon achieve.