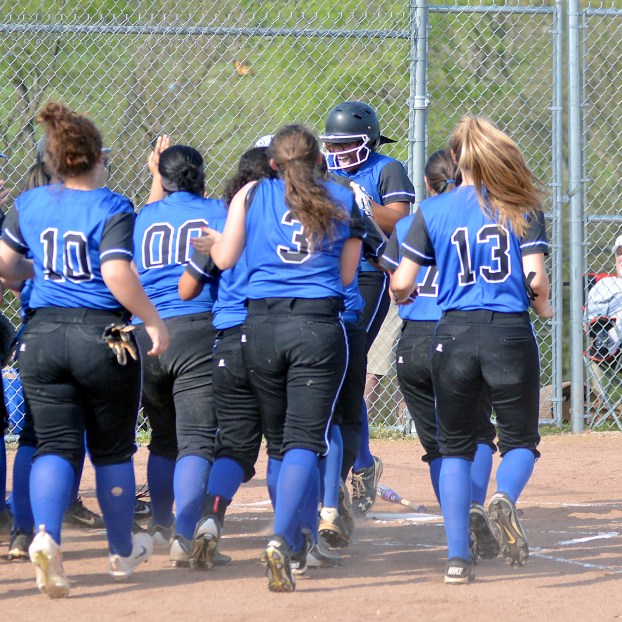 Jeremy Schneider/jeremy.schneider@amnews.com Nakiya Frye of Danville, in helmet, is greeted at home plate by her teammates after hitting a two-run home run in the first inning of Saturday's game at Washington County.

SPRINGFIELD — Saturday’s game at Washington County was the third game in three days for the Danville softball team. Coach Joey Sallee said he’s seen three completely different teams come out in each of those games, all with same uniforms and names.

The Admirals team which took the field Saturday used a big blast from Nakiya Frye to take an early lead, but a huge stumble in the second inning crushed the Ads as they fell 17-2 in four innings to the Commanderettes in the 12th Region All-A semifinal.

And lest anyone think the hardest is over for Danville, take a peek at this week’s slate — the Ads host Garrard County today, travel to Lexington Catholic for a doubleheader Tuesday night, and then go across town to face Boyle County on Wednesday. That’s a combined record of 32-18 for those three teams.
“Next week, they’re going through the meat grinder,” Sallee said. “We did that on purpose. Actually, I tried to get all three district games all in one week, simply because we haven’t won a district game in quite some time. I thought, Let’s get them all together, boom, boom, boom, let’s see what happens.

Oh, and there’s prom on Saturday for Danville as well. Which leads into the crux of what Sallee believes is ailing his team, a lack of focus and commitment.

“It’s focus, it’s mindset,” Sallee said. “We talked to them about how you approach the game. When you get on the bus, is it like a party train or do you get on there, get settled in and start thinking about what you’re going to do. That’s gotten better, but it’s still not where I’d like to see it.”

Danville fell to Lexington Christian 21-1 last Thursday before falling to Paris 12-8. However, the Ads held an 8-1 lead against the Hounds, so there was relief that the disheartening loss to LCA didn’t carry over.

There was also hope that the positives from the Paris game would continue over to Saturday morning.

For at least 1 1/2 innings, that was true. Frye took a pitch over the wall, plating Morgan Ryan, who had reached on a single on batter earlier.

That 2-0 lead held up until the bottom of the second inning, when Washington used three home runs to aid in scoring 12 runs and taking a 12-2 lead. Nine of those runs came with two outs.

Washington added another run in the third and four more in the fourth to end the game early. Meanwhile, Danville didn’t get another hit for the rest of the game, and only two more players reached base, Hannah Felty and Alayna Wood on walks.

While the Ads’ bats were in cool down mode, the defense was going up in a ball of flames. Of the 17 runs, only two were earned as Danville committed nine errors.

The loss was Danville’s seventh in a row and dropped them to 2-9.

“Right now, it’s a matter of keeping them together,” Sallee said. “We told them it’s real easy to start turning on each other. When you start pointing fingers because you’re going through this losing streak, it doesn’t make things any better, they’re just going to get worse.”