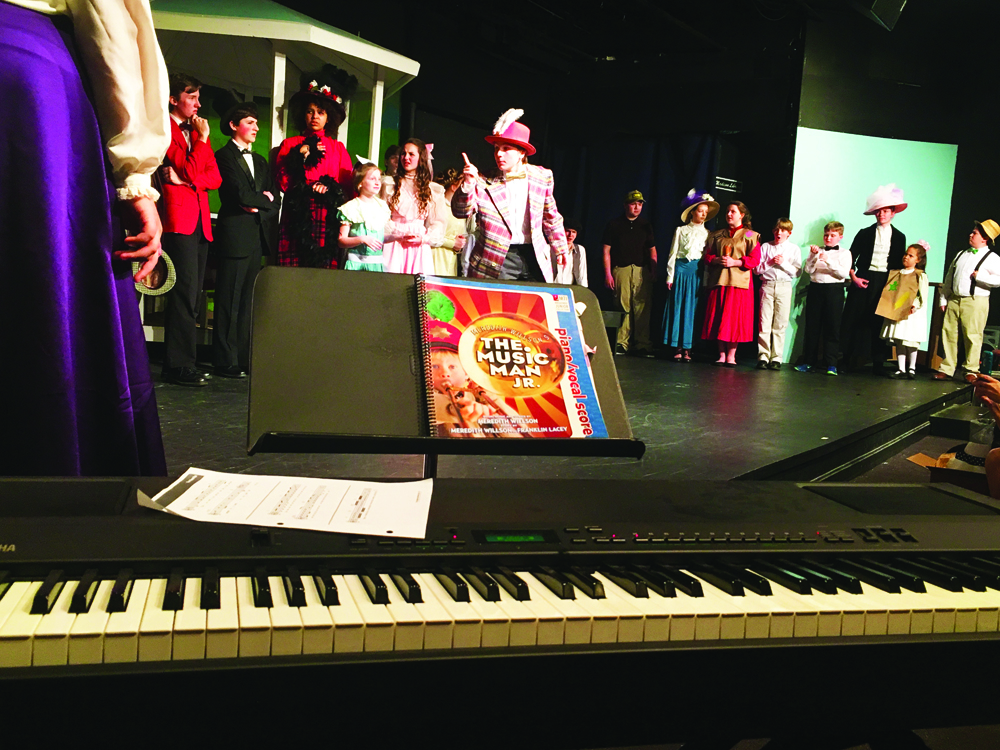 Most people know the story behind the production “Music Man.” But for those who may not, and plan to take in “Music Man Jr.” at West T. Hill Theatre, here’s what you can expect:

“Set in the early 1900s in Iowa, Harold Hill — played by newcomer Michael Underwood — a wandering con-man, arrives to swindle the people of River City.  He stirs up some trouble involving the newly procured pool table in town and resolves to “save” the town from sin and ruin by starting a boys band.  His plans go awry when he falls in love with the local frosty librarian, Marian Paroo, (played by newcomer to our stage, Lianna Naughton).  In the midst of all this trickery are great songs, lots of action and 32 wonderful young people ages 6-18.”

That’s straight from the director’s mouth, Karen Logue. On a Thursday night, Logue and her trusty, veteran stage-manger, Alice Berka, observe the somewhat-rambunctious-at-times group of varied-aged kids in dress rehearsal. 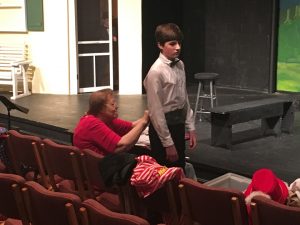 Berka sits on the front row, playbook in hand to keep up with the incredibly speedy dialogue — and so far they’re nailing it.

“Just listen — the harmony …” Logue whispers. The kids are on-point, singing at top of lungs and — yes — even in key.

But the songs are not the only harmonious part of the production.

This atmosphere is what rejuvenates Logue; the commadarie among the kids is nothing short of amazing. “We used to mostly get the younger kids, and that’s way different to direct when you don’t have these older kids helping.” The older actors seem to help guide the younger ones, she says. They help out tremendously. 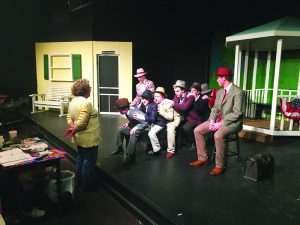 (Bobbie Curd photo)
Karen Logue directs an intricately choreographed scene with some of the male actors in “Music Man Jr.”

Logue says, “We auditioned nearly 70 young people and they all did wonderfully at auditions, which was simply cold readings, interviews and stage exercises.  We then had them sing excerpts from the show, teaching as we went along and broke them up into groups for sing- alongs. Our Musical Director, Casey Huggins has a fantastic way with kids and knew what to listen for and her experience is invaluable.  The result is this wonderful chorus that blows your socks off …”

Logue says in addition to the romantic leads of Underwood and Naughton), this large cast also includes Mattie Underwood as Mrs. Paroo. Ironically, Underwood played the part of Winthrop (now played by Meg Wilson) 10 years ago, when WTH first produced this show.

“The Mayor of River City is played by Aidan Johns, his wife is Alyssa Wray.  Marcellus, Harold’s buddy in crime, is played by Elijah Brown.  Harold’s nemesis, determined to expose his wicked ways, is Charlie, played by Simon Loftus.  There are many more wonderful characters, all played to the hilt by these talented young people.”

Scott Brown is handling the orchestrated music for the production.

Logue says she would be amiss not to mention how amazing Berka’s costuming was — again. “She put all of these together, can you imagine? She came through. Again,” Logue says, staring down the stage of townspeople. The girls are all dressed up in large, ornate hats, high collars and long skirts, with the boys in dapper suits and fedoras.

“I think our community will be pleasantly surprised at the beautiful harmonies Casey has taught this group. The music of Meredith Willson is extraordinary all by itself, but these kids have put an incredible amount of work into the music and you can hear that. This story is a familiar one to many, but I think there are enough surprises in the dancing and movement and costuming of this production that it will be a fun evening for all ages.”