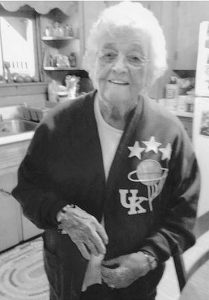 Blanche Ballard, 88, of Lancaster, passed away Saturday, April 15, 2017 at her home. She is survived by her loving husband of 69 years, Paul.

Blanche was born on November 28, 1928, in Garrard County to the late Lance and Bertha Morris Adams. Blanche worked for the post office for many years and was a faithful member of Bryantsville United Methodist Church.

She touched many lives and was loved by all who knew her. Her family was her greatest joy and she will be greatly missed.