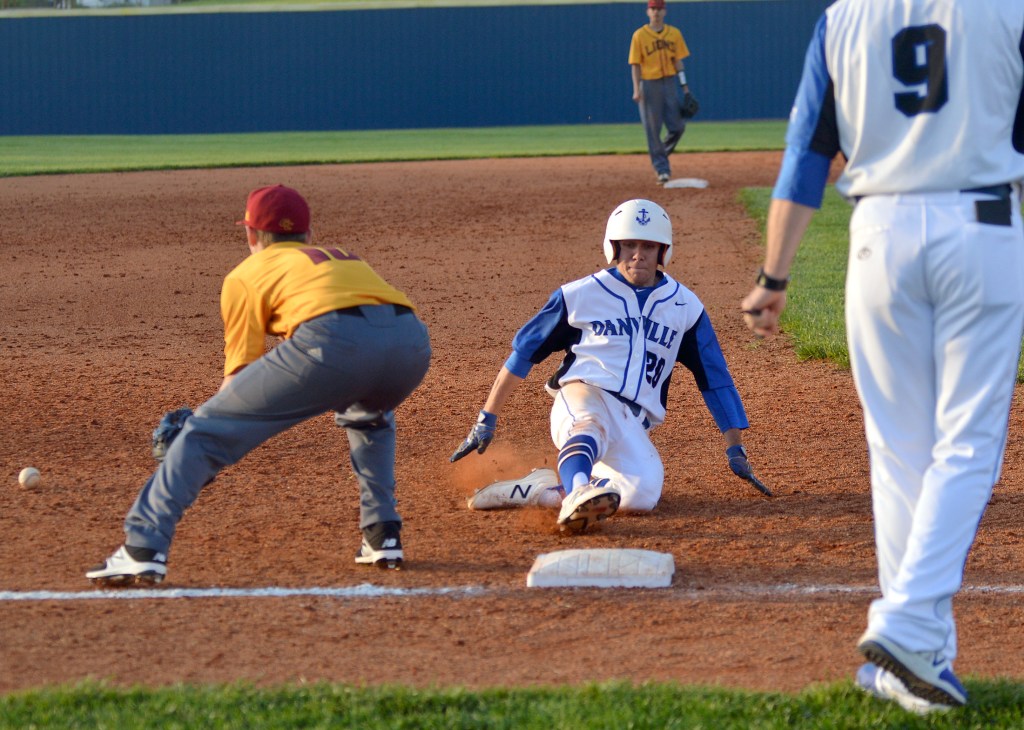 Jeremy Schneider/jeremy.schneider@amnews.com Danville's McCallum Morley slides into third base ahead of the throw during the Admirals 10-6 win over Garrard County on Wednesday.

In order to be successful, Paul Morse knows his Danville baseball needs to make things happen on the base paths and get creative. The Admirals aren’t going to out-slug anyone.

So it was on from the beginning of Wednesday’s 10-6 win over Garrard County as the Ads stole three bases the opening frame and scored twice. They finished with 11 steals in 12 attempts.

“We have to be pretty aggressive on the bases and do things that way,” Morse said. “Those kind of things get our team going and they get excited, we get into it and play a little better when we do that.” 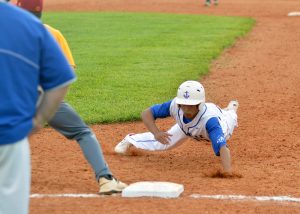 Jeremy Schneider/jeremy.schneider@amnews.com
Dmauriae VanCleave of Danville dives back into first base.

Zach Dampier paced the team with three steals, Brennan Washington and Tanner Ford each had two, and Mason Schroeder, Jacob Crank, Dmauriae VanCleave and Austin Mott each stole one.

According to Garrard coach C.J. Lynn, most of the teams they’ve faced this year have shown that aggressive nature on the bases.

“That’s been every team we’ve played all year,” Lynn said. “We try to be, but it doesn’t help when you make four errors in one inning. We made four errors in the first inning and gave them two runs. Pitcher, instead of having eight pitches in the inning he has 28. That set the tone for the whole game.”

The Ads cranked out 11 hits, but nine of them were singles; only Schroeder’s double and Ellison Stanfield’s solo home run went extra bases. McCallum Morley was 3-for-4 with two RBIs and a run; Schroeder was 2-for-3 with two runs and an RBI; and Washington was 2-for-2 with two RBIs.

“He needed a day like that,” Morse said of Morley. “He’s been hitting the ball fairly decent and not getting anything out of it. … He’s a really good bunter, does that on his own in any count. If we can get him hitting, that will help the bottom of our lineup.”

Brian Baxa got the start for Danville but struggled with location on his fastball from the start. He lasted six innings, allowing three runs (one earned) on three hits and three walks while striking out 12.

“Credit for him for not having his good stuff and still giving us six innings,” Morse said.

Mott pitched the seventh, and the Garrard transfer allowed two hits and two walks while giving up three runs (one earned).

“He was pretty nervous, so I thought he went in and did well for having those emotions,” Morse said. 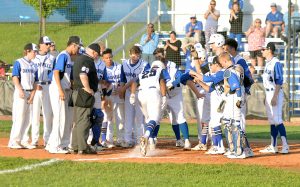 Drew Delili started for Garrard and went 2 1/3 innings. He gave up six runs (four earned) on four hits and six walks. Ethan Lamb threw the final 3 2/3 innings, giving up four runs on seven hits with two strikeouts and one walk.

The Ads took a 10-3 lead into the seventh, but the Lions plated three before surrendering the final out. Mason Bowman, Anthony Justus and Collin Carver all scored for Garrard (2-12), which lost its fifth straight game.

“We’ve worked hard, we’ve battled hard,” Lynn said. “That’s something we try to instill in our kids — it doesn’t matter if you’re down by 10, it’s still 0-0 ball game. You have to play the whole ball game, you have to play it all the way out because something could happen like tonight.”

Danville improved to 9-8 overall and 2-0 in the district.