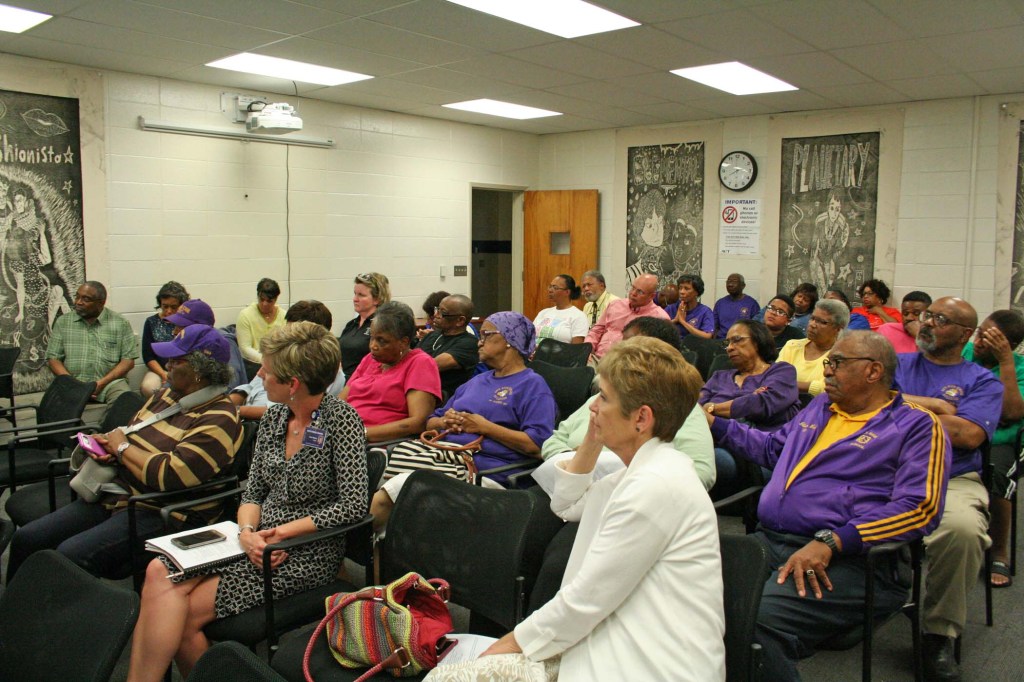 Kendra Peek/kendra.peek@amnews.com A crowd gathered to speak, showing their support for keeping the Bate Bulldog mascot, versus changing the mascot to Admiral, which is the proposed plan from the Danville Board of Education for all of the Danville schools.

About 30 people gathered at the Danville Board of Education meeting to voice their disagreement with a plan to change the Bate Middle School mascot from Bulldog to Admiral — a decision the board announced in March in an effort to bring “unity” to the district.

“Bate and Bulldogs are one,” closes the letter from Theora Coates, a 1936 graduate.

“Just as you value your history, we value ours. What is left is sacred to us and our black community and we ask that you respect it enough to let it remain the Bate Bulldogs,” is the ending to the second letter, from Vivian Troxler.

“(The Bate Bulldog) has had historical meaning to this community and so many have attended the school,” said the letter from 90-year-old Rosetta Ford.

Ball pointed out the large group of supporters that had come to Monday’s meeting before asking if the change had been made officially.

“No, it has not been made official by any means at this time,” Board Chair Paige Mathews said.

“I understand that you don’t understand. That in and of itself is not justification to change it, just because you’re not affected by it,” Singleton said.

She highlighted the importance of John W. Bate, along with his “tenacity” and “perseverance.”

“The Danville Board of Education’s decision to change the Danville Bate Middle School mascot from Bulldogs to Admirals, or the consideration thereof, is offensive and disrespectful to the history and legacy of J.W. Bate and Bate School,” Singleton said. “Obliterating any part of African-American history is an offense against African-American history in its entirety and a direct attack on our ancestors who paved the way.”

Singleton said it was important to “acknowledge” the impact African-Americans played in history.

Singleton said instead of using the mascot to unify the schools, the board should focus on “closing the achievement gap amongst your students, and unifying the student body so that the majority, if not all, students are identified as distinguished and proficient.”

“I would further suggest that you unify the administration to reflect diversity and therefore represent the student body. Lastly, I would encourage you to unify the stakeholders in the community who have an interest in the schools — the teachers, parents, taxpayers, community members, community leaders — and involve them prior to making such drastic decisions, such as this one that had an impact on so many,” she said. “Absent a legitimate public interest, changing the Bate mascot is simply not necessary.”

J.H. Atkins, filling the role as interim assistant principal at Danville High School, as well as a longtime presenter on John W. Bate, and a former teacher in the Danville Schools, spoke to the board in character as J.W. Bate, offering to educate the community, as well as the board, on his life.

Michael Hughes, president of the Danville Boyle African-American Society, said the community had already lost so much from the history of the Bate High School, such as trophies that have been lost or destroyed, among other things.

“A few years ago, when we created the historical society, one of the main things we wanted to do was the legacy of Bate High School … The athletic trophies that were earned by so many — those trophies were somewhere destroyed,” he said. “We don’t know what happened to them.”

The only thing the society has, Hughes said, is an old bookshelf that a teacher thought to keep. The building itself was last used in the 1977-1978 school year, and was demolished in June 1978, according to archives of The Advocate-Messenger.

“There is such a great legacy … This is something that is really precious and special to the people that have gone on and the people that are still here,” Hughes said, referencing a 1951 graduate in the crowd. “When this came out in the paper, I think, so many people were hurt, by even the idea.”

After the meeting, Hughes said he thought it was important to preserve what was left of the school’s history.

After the meeting, Margaret Alcorn, president of the Bate High School Alumni Association and a 1960 graduate, said the group came because they felt it was important.

“It’s part of us, and part of the community, too,” Alcorn said. “I thank everyone that came out to support us.”

Other meeting attendees included 1962 graduates Alonzo McGuire and Glenn Grey, who are former Bate athletes. McGuire was also the mascot for the basketball team.

“That’s all I knew was Bate Bulldogs,” Grey said. “It would be hard to — hard to have Bate around without Bulldogs. It’s like losing a symbol. It’s our legacy.”

Ellen Johnson, a 1961 graduate, echoed the importance of the school’s legacy, pointing out that the former school had been torn down, and the colors of purple and gold had been taken out of the school.

“The only thing we’ve got is the Bate Bulldog,” Johnson said.

Nancy Grey, Sharon McGuire and Ronnie Arrington, all 1964 graduates, were there, too. Arrington said it was about saving history and recognizing what it meant to the students who went there.

“Nobody else wanted us. If it hadn’t been for Professor Bate, we would have all been uneducated,” Arrington said.

Grey said she also felt like the decision should not be up to a small group of people, “it should have been a public decision.”

The women said they felt like the public showing of support might have made a difference in letting board members know how they felt.

The Danville Board of Education announced during a March meeting that they planned to change all of the Danville School mascots to Admirals, and all the colors to blue and white, to maintain unity from preschool through grade 12, once the Edna L. Toliver Intermediate and Mary G. Hogsett Primary schools are opened.

They plan to maintain the names of the schools, which represent former educators in the district.

According to Danville Historian Charles Grey, the earliest reference to the Bate Bulldog mascot was in 1927. 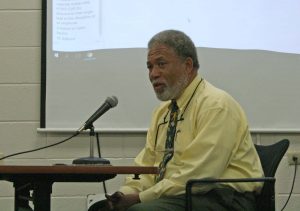 Kendra Peek/kendra.peek@amnews.com
J.H. Adkins, as John W. Bate, speaks to the Danville Board of Education. 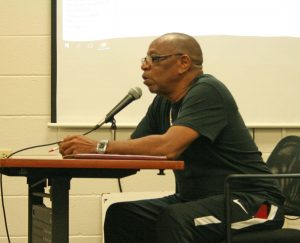 Kendra Peek/kendra.peek@amnews.com
Michael Hughes, president of the Danville Boyle County African-American Historical Society, speaks to the Danville Board of Education on Monday night. 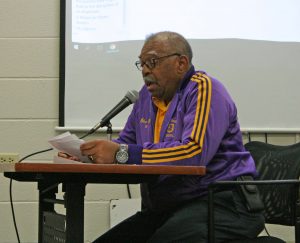