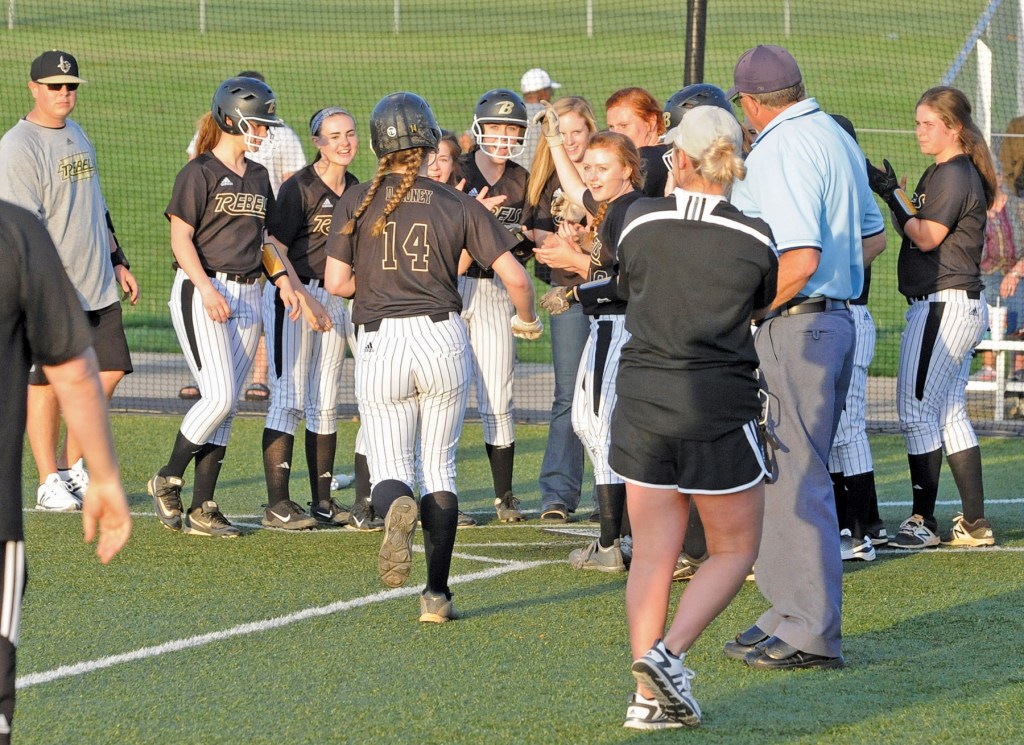 But the Rebels’ offense came to life in the sixth, scoring eight runs to win 12-1 over their cross-town rival.

Boyle’s first three hitters did most of the damage, with Danielle Roney cleaning up with a two run walk-off home run to end the game.

The win was Boyle County’s fifth straight in as many days — something coach Brian Deem congratulated his team for after the game.

“I don’t want to ever devalue a win,” he said. “They finally got their heads screwed on straight, we started focusing a little bit. I was trying to do short game early to get some energy, then we finally started to put the bunt down, get people on base, we created some energy and opportunities. We’ve been doing that the last four, five, six games since last week. That’s a good thing. It wasn’t our best, we know that, we’ve just got to get our minds right and get ourselves ready for E’Town tomorrow.”

Danville has also been busy this week, playing a doubleheader Tuesday at Lexington Catholic. They’ll travel to Wayne County this weekend for a round robin.

Coach Joey Sallee praised his pitcher and said that his team had a boost being in the underdog role.

“Peyton kept (Boyle) off balance a little bit, which was a big help tonight,” he said. “We kind of play the underdog thing with them. I told them, ‘there are maybe a dozen people here who think this game is going to go past the third inning. It’s up to you guys, you can compete, you can come in here and let this thing get out of hand.’

“We took it to the sixth inning, but I can’t complain too much. They did everything we asked them to do. They’re backing each other up. We’re shifting some people around in positions, and I don’t think everyone is totally happy with that all the time. But we’ve talked to them, ‘when you come to the ballpark, you come to play for the team. You don’t come to play for yourself. If you are, you’re playing the wrong sport.’ Sometimes that means making sacrifices. They’re slowly starting to understand that, I think.”

The Rebels led 4-0 after one inning before Danville brought one back on an RBI triple from Dora Swann in the third.

Danville had a chance to tie the game in the fourth inning with two runners in scoring position, but Boyle pitcher Katy Grace Chadwell struck out two batters to end the inning.

“We probably weren’t as aggressive on the basepaths as we normally are,” Sallee said. “I have a lot of respect for (Mattie) Robbins. And on the turf, you’ve got to test it to see how your kids are going to run, because it’s different. We could’ve been more aggressive, but that’s my fault. That’s my call. I like playing out here, the girls seem to handle it much better. We played on turf last night because we knew we were playing on turf tonight. I think that helped.”

“She’s starting to hit the ball much better,” Deem said of Roney. “She’s been really good, she played like a beast at shortstop last week at Ashland. There was plays being made that just really excited me, there were plays in the 5-6 hole and our third basemen made them, and I saw Dani diving as if the play was going to be missed. That’s what I want our kids to do: Always assume the ball is going to be missed. She’s starting to put the bat on the ball a little bit, she’s hitting with power as you saw tonight. Danielle has done a fantastic job this year.”

The Rebels have needed that leadership because two pitchers — Kelly Lay and McKinley Rush — have been out due to injury. Chadwell has pitched well in their absence, Deem said.

“I had a three-pitcher staff, and now I’ve got two out. ‘Kinley has only pitched five innings this year. Kelly Lay was in warm ups, she’s just walking and stepped wrong, rolls her ankle, so she’s out. Katy Grace is going to have to bear the load. She pitched outstanding last night against a very good hitting Madison Southern team. I think a little bit of fatigue got her today, but I told her, she’s got to get herself ready tomorrow.”

Boyle lost at Lincoln County last week, pushing the Rebels to 0-2 in the district. But the loss sparked this win streak, and Deem said his team has had to dig deep, exactly what he wanted when he made the schedule.
“We’ve been on the road a lot,” he said. “My kids are tired. I think this was just a little bit of a lack of focus, being a little lethargic. The good thing is we still got the win. We know we’re the three seed, it is what it is, it doesn’t matter who we play. I’ve put these kids through a grind in the first half of the season. It’s paid its toll a little bit. But that’s what I wanted to do, and we’ve got to find a way to respond.”