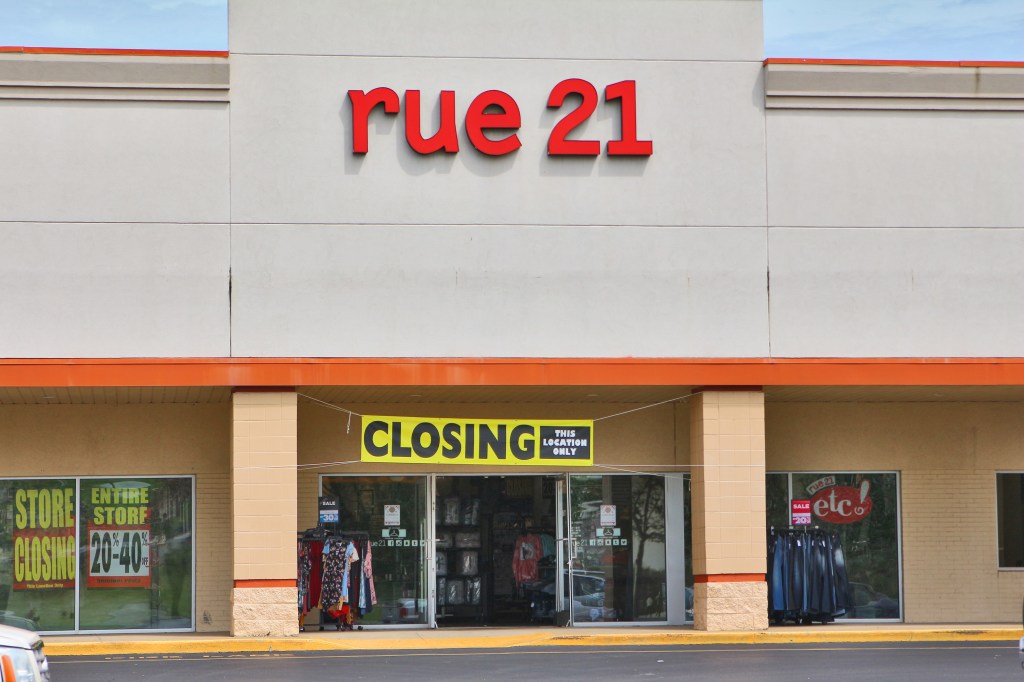 Ben Kleppinger/ben.kleppinger@amnews.com The rue21 in Danville Manor Shopping Center is closing as part of a larger closure of 400 rue21 stores nationwide.

Danville’s rue21 is closing as part of the clothing store chain’s plan to shutter about 400 stores nationwide.

“It’s true – we are closing some stores,” a statement published by the company on April 15 reads. “It was a difficult but necessary decision.”

The Danville location is one of nine in Kentucky slated for closure, according to rue21’s store directory. Locations in Frankfort, Campbellsville, Georgetown, Paintsville, Glasgow, Alexandria and two in Louisville will also be closing. At least 20 rue21 stores will remain open in the state, according to the directory, including locations in Lexington, Somerset, Richmond and Bardstown.

Danville’s rue21 is advertising its pending closure with signs stating that items are now 20 to 40 percent off in the “entire store.” Employees at the store Tuesday could not comment on the record concerning the closure. One employee said there could be some opportunities for current employees to transfer to other locations.

No specific closing date was available for the Danville store.

rue21 has not officially notified the company that owns Danville Manor Shopping Center, BC Wood Company, that it plans to close, Asset Manager Jason Gentner said. But BC Wood had already been monitoring rue21 through industry websites and had identified it as a “potential closing,” he added.

“They are one that we’ve been watching probably for the last six months,” he said.

Gentner said BC Wood, which owns 40 shopping centers, will likely not have a problem finding a new tenant for the space.

“I think we should be able to backfill this center very quickly. Danville has been a strong market for us,” he said. “We like Danville. It’s a great shopping center for us — it stays full.”

According to rue21, it will continue to operate “hundreds” of other locations and sell products online.

Jody Lassiter, CEO of the Danville-Boyle County Economic Development Partnership, said he’s aware of the announced closure and that it “is part of a much larger corporate decision.”

“Since rue21 located a store here, other new clothing options have entered our market, such as Burke’s Outlet, TJ Maxx and Rack Room Shoes,” Lassiter stated. “However, the BC Wood Company manages Danville Manor Shopping Center very successfully with few or no vacancies. I am confident that another retailer will have interest in this location.”

Alumni turn out to explain why losing mascot means…