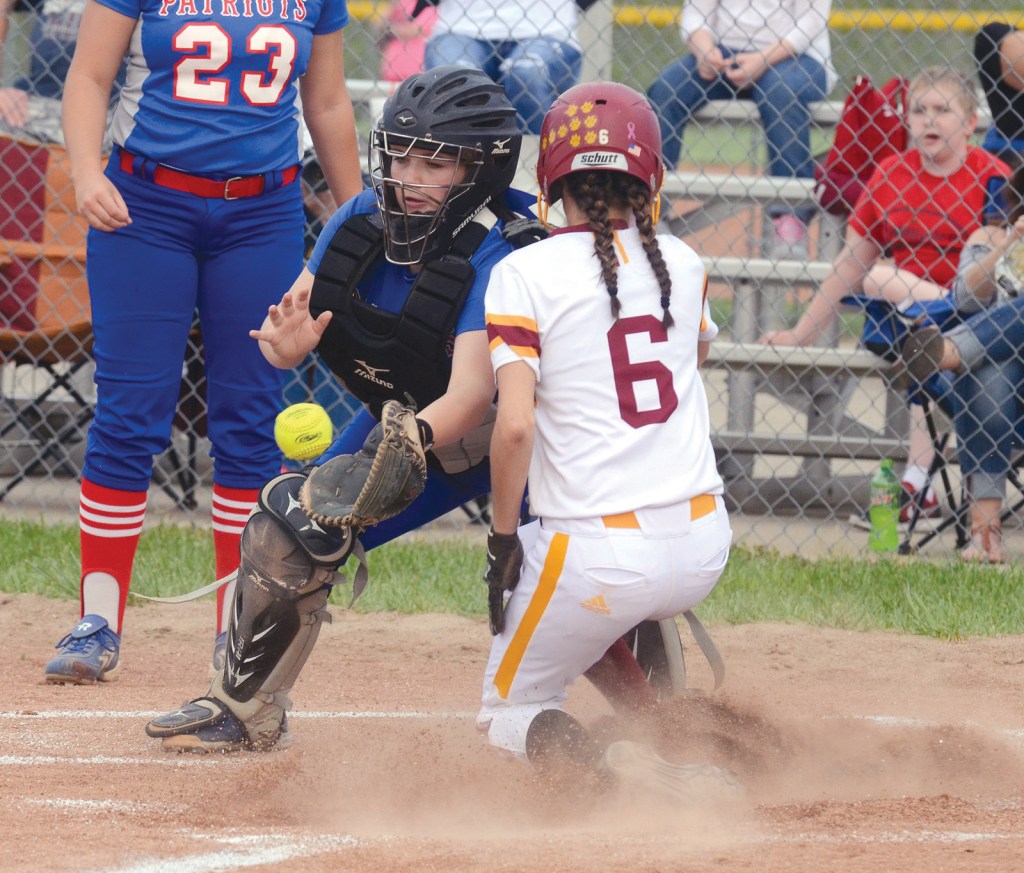 The Lions, who now have a 16-6 overall record and a 2-0 mark in the district, never trailed in the game, putting up two runs in the opening frame, two more in the fifth, then closing with an explosive six-run sixth inning.

Kelsey Perkins, who wasn’t supposed to start, pitched the three-hit shutout. The Garrard sophomore walked five and struck out five in the complete-game win.

“(Junior pitcher Elle Montgomery) has been sick with strep (throat) for like four or five days and physically she was just a little sore. Her turn was tonight, but she was just worn out and we couldn’t go with her. So we went with Kelsey,” Garrard coach Todd Montgomery said. “Kelsey’s done a great job for us and she came out and did a great job tonight. I’ve got two bulldogs for pitchers in Elle and Kelsey.”

“It’s kind of been the same all year. When we hit the ball, we usually hit it pretty good. Some of our hits tonight we hit it to them and it took us out some innings, but we had a good hitting night. We were really focused,” Montgomery said. “We really concentrated on our hitting the last four or five days and it’s paying off for us.”

Freshman batter Katy Pozzuto might not have had a multiple hit effort like her teammates, finishing with just one hit. However, that shot was perhaps the biggest of the game as she connected for a grand slam to centerfield in the six-run sixth to set the Lions up for the run-rule shutout.

Adams earned a one-out walk to start the sixth and Sis Logan followed her with a bloop hit. Adams came home on an RBI-single by Perkins, and Logan completed her trip around the bases on a single by Saylor. Garrard had the bases loaded after Moss walked on, then Pozzuto cleared the bases with her grand slam.

While not claiming to see into the future, Montgomery acknowledged he predicted Pozzuto’s long ball.

“It was odd. When they called timeout there to go out there and talk to their pitcher and I had my group of four girls there, Katy and my three runners, I just told her, ‘You’re going to hit it out,’” he said. “I said, ‘This is going to put us up 10. Just hit it out the first pitch.’ And sure enough she did. She’s really been coming along. She’s a talent.”

Lincoln (7-8, 1-1) never really had a chance to make a dent in the Garrard lead with only three runners getting on base. Jacque Upchurch had a hit in the third inning and Carmen Green and Kallie Phillips both singled to reach in the fourth. The Patriots were set down 1-2-3 in the first, second, fifth and sixth innings.

“I’m kind of in shock because I thought we were ready,” Lincoln coach Jeff Young said. “You’ve just got to take your hat off to their pitcher, Kelsey Perkins; we couldn’t hit her. Even when she got hurt she kept battling. That’s what we don’t do right now. We have a little adversity and we don’t battle. We started thinking we were losing and we were done.

Garrard posted the 2-0 lead just minutes into the game. Day led off with a single and she moved to third on the first of Adams’ two doubles in the game. Day later scored on a Logan ground out, then Adams scored off a bases-loaded pitch to Saylor by Lincoln starter Sydney Slone.

Logan, Perkins and Saylor all singled to reach in the fifth inning. Saylor drove in Logan to make it 3-0 then Perkins tallied off a Pozzuto ground out for the 4-0 advantage.

Pozzuto’s grand slam in the sixth marked the end of Slone’s time on the mound. Lydia Rice came on with two outs. She gave up one hit to Grace Freeman before getting out of the inning.

“We missed a big opportunity tonight,” Young said. “If we win this game, it pretty much would assure us the region because we play Danville the first round (district tourney), but now we have to play Boyle.

“You’ve got to take your hat off to Garrard County. They are well-coached. They did everything they needed to do. Their pitcher was awesome. They hit the ball when they needed to hit the ball. And we didn’t. Hopefully we’ll bounce back. We’ll practice hard that’s for sure.”

Montgomery said the key to Thursday’s win over Lincoln was team.

“It takes a team to win,” he said. “It was a good team effort. It wasn’t just one or two. It was the whole team, and even the bench players. They play a part in the game preparation.”

And as the top team in the district and the team with the best record in the 12th Region, Montgomery says the Lions need that team effort to help with the target on their backs.

“We had a good pep talk about that last night,” he said. “We’ve battled that this year a little bit. When we go play somebody, it’s their super bowl and they bring their A-plus-plus game, and if we don’t bring our best game we’re going to get beat. And we have. It shows in our record we’ve lost games we shouldn’t have. We just have to learn the mentality that goes with it and build on that.”