Heart of Danville honors Tom Poland as volunteer of the year 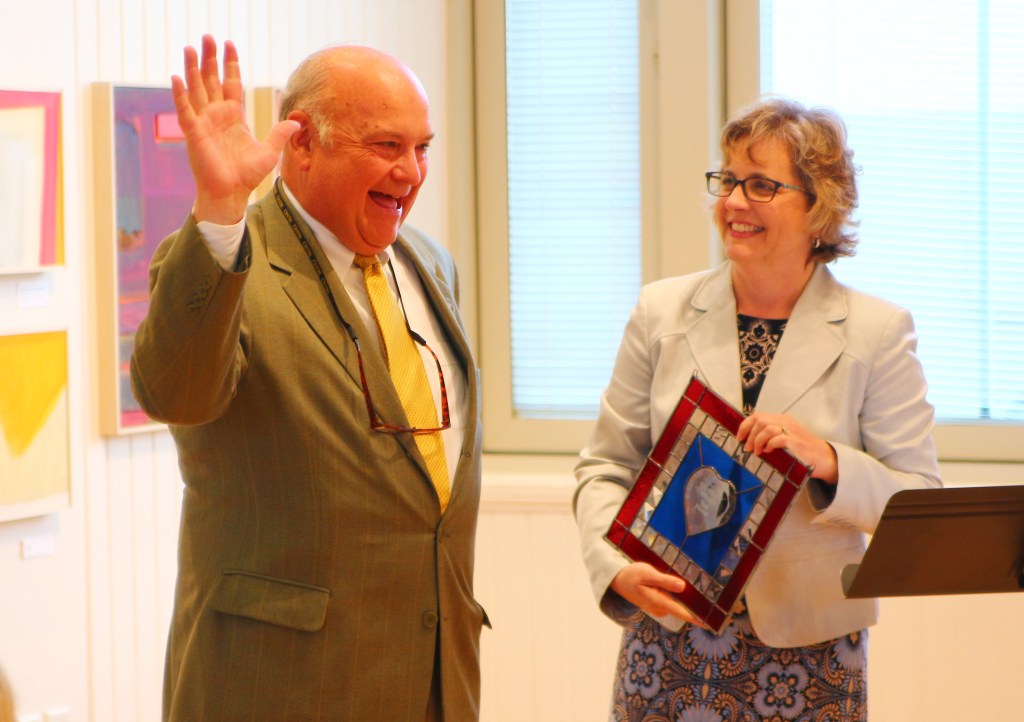 The Heart of Danville Main Street program has named retired community banker Tom Poland as its volunteer of the year.

Poland was presented with the Heart’s “Big Heart Award” at the organization’s annual awards breakfast Thursday.

Poland, who worked for 40 years at Central Kentucky Federal and Farmers National banks, earned the award for his work over the past two years as chairman of the Heart’s Board of Directors, said board Chairman Valery McMann, who presented the award.

“Whether he was playing Santa or wearing his bright red vest to lead us through strategic planning, his love and commitment to both HOD and the community are always there,” McMann said. “‘Danville is home,’ according to Tom. For these reasons and so many more, we are pleased to present our friend and invaluable volunteer Tom Poland the Big Heart Award.”

The Heart also awarded its first ever “Guiding Heart Award” for “an individual who supports downtown through their commitment to sharing knowledge and helping others.”

Director Nick Wade presented the award to Kitty Dougoud, who is the state Main Street program coordinator for Kentucky.

“As the state Main Street coordinator, Kitty has overseen more than 40 programs, a number that is four times more than the National Main Street Center’s preferred ratio of programs to state coordinator, and has consistently fought for both state and federal funding of Main Street programs and preservation initiatives,” Wade said. “In offering Kitty the first ever Guiding Heart Award, we want her to know just how much she means to the Heart of Danville.”

The Heart also presented five other awards during the breakfast, which was catered by Cue on Main:

• Jerry Houck, owner of Cue on Main and Nellie Burton’s Steakhouse and Sports Bar, was given the King of Hearts Award for completing “an outstanding rehabilitation project” in 2016. Nellie Burton’s opened in August 2016.

“Jerry performed extensive renovations inside to the dining rooms and kitchen, and he painted the front of the building,” McMann said.

• Chris and Wendy White, owners of Plank on Main, were given the Heart of Gold Investment Award for directly investing more than $1 million in improvements for downtown Danville.

“The Whites have truly seen the appeal of downtown living, which is evident in their decision to live above Plank on Main,” said Kara Bastin, Heart of Danville treasurer. “In the fall of 2016, the Whites also purchased the neighboring building, 217 W. Main St., and plan to renovate the upper floor of that building into a loft residential space. Further renovations include a full renovation of the apartment at 219 and the addition of a premier outdoor ‘Plank Patio’ behind 217.”

• Carol Senn, owner of Carol’s Bridal and Gift Boutique, was given the Heartbeat Award, which is presented to “a business that excels in visual merchandising and storefront design.”

“Carol’s has now been in operation for over 30 years and over that time, they have continued to appeal to high school students with their window displays of the seasons trendiest gowns,” said Heart board member Kate Snyder. “Customers are drawn to the shimmer and sparkle of the gowns as they window shop, but Carol’s Bridal and Gifts has also made a name for themselves throughout the region. Girls have come from all over to buy a dress at one of downtown Danville’s mainstays.”

• Cassie Baeker, owner of Vestiary, was given the Heart on Fire Award, presented to a business “that incorporates creative or forward thinking approaches to their business.”

“One of the most exciting additions to downtown Danville in recent years is Vestiary, a contemporary fashion boutique that specializes in women’s clothing and accessories,” said Megan Noltemeyer, Promotions Committee chairwoman. “… Cassie hand-selects each item the store carries and frequently travels to other states to purchase new goods for the collection.”

• Danville Office Equipment was given the Pulse Award for Business Excellence.

“The staff of DOE is a very dedicated group of people that strive to give the best customer service possible,” said Poland, who returned to the podium at the Community Arts Center to present the Pulse Award after receiving his Big Heart Award earlier. “For the hard work that has been needed to sustain for over 66 years a successful business in downtown Danville, we would like to present Danville Office Equipment with the 2017 Pulse Award for Business Excellence.” 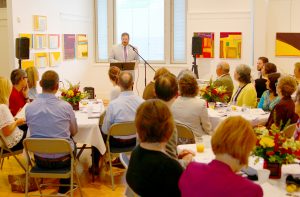 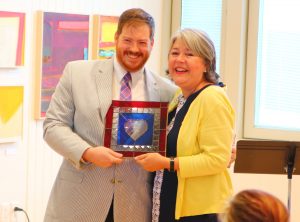 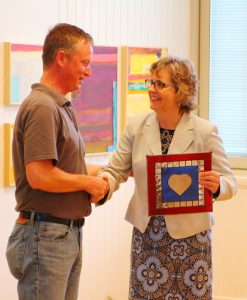 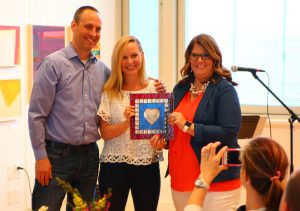 Ben Kleppinger/ben.kleppinger@amnews.com
Chris and Wendy White, owners of Plank on Main, left and second from left, were given the Heart of Gold Investment Award for directly investing more than $1 million in improvements for downtown Danville. 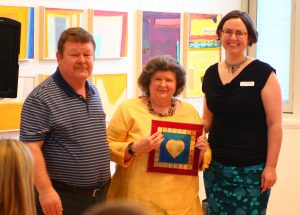 Ben Kleppinger/ben.kleppinger@amnews.com
Carol Senn, owner of Carol’s Bridal and Gift Boutique, center, was given the Heartbeat Award, which is presented to “a business that excels in visual merchandising and storefront design.” 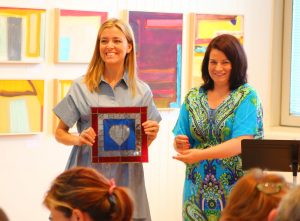 Ben Kleppinger/ben.kleppinger@amnews.com
Cassie Baeker, owner of Vestiary, left, was given the Heart on Fire Award, presented to a business “that incorporates creative or forward thinking approaches to their business.” 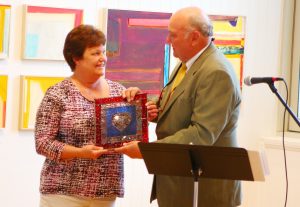 Trees, statues and more pop with color as part…