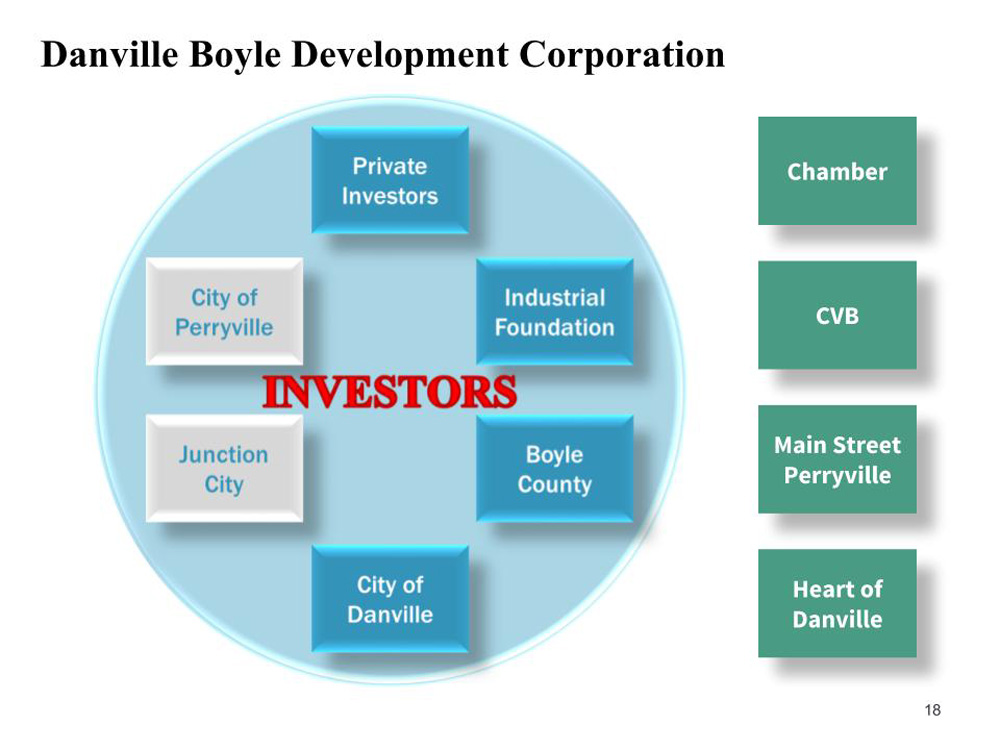 RKG and Associates A slide from a presentation by Kyle Talente with RKG and Associates shows a proposed reorganization of the Danville-Boyle County Economic Development Partnership. The proposal would remove the Chamber of Commerce, the Convention and Visitors Bureau, Main Street Perryville and the Heart of Danville from the EDP, while adding voting seats in the renamed Danville Boyle Development Corporation for private businesses.

A transformative proposal revealed Thursday would remove four agencies that deal with business advocacy and tourism from the Danville-Boyle County Economic Development Partnership and give private businesses a bigger seat at the table.

A renamed agency, the “Danville Boyle Development Corporation,” would have a board of 20 people from the private and public sectors, but would no longer include voting members from the Convention and Visitors Bureau, Chamber of Commerce, Heart of Danville or Main Street Perryville. That’s according to a blueprint created by Kyle Talente with RKG and Associates, the company tasked with developing a strategic economic development plan for Boyle County.

Talente revealed his plan at the EDP’s board meeting Thursday morning and discussed it further with members of the public Thursday night.

“This is our recommendation. This is one of many different directions that the community can go,” Talente told EDP board members Thursday morning as he presented the plan, of which the EDP reorganization is just one component. “Our professional opinion (is it) will put you in the best position to be successful in your next step in the journey of economic development for Danville-Boyle County. That being said, you’re not going to hurt my feelings, nor is it going to be inappropriate as we get into the implementation phase to say (we want something different).

“This is not gospel if you will, but it is from our perspective the best way to move this community forward.”

The reorganized “DBDC” would have a board consisting of:

• three at-large members from the business community, who would be elected to three-year terms;

• three members from “Chairman’s Circle” donors who contribute to the funding of the DBDC;

• three members each for the governments of Danville and Boyle County; and

• one member each for the governments of Perryville and Junction City.

However, Perryville and Junction City would only get their seats at the board table if they begin contributing funding to the DBDC. Currently, neither city funds the EDP.

“From our perspective, this is a pay-to-play situation. If you want your seat, you’ve got to come up with the green,” Talente said. “… They can have (their seats) if they want them, but you’ve got to come to the table with your money to pay.”

The CVB, Heart of Danville, Main Street Perryville and the Chamber of Commerce would all have non-voting members on the DBDC board.

Currently, the EDP board consists of one voting member for each of the nine partners; two at-large voting members from the community; the EDP president and CEO, who can vote on all matters except his or her own employment; and up to four EDP officers in the positions of chair, vice chair, secretary and treasurer.

“That’s a tremendous change … the reality is the business of economic development needs to be done by this board. The foundation is an investor, no different than the city or the county or the Chairman’s Circle.”

Talente said that change would help address the “perception of unfairness” held by some, who believe the industrial foundation has too much influence over the EDP.

“There is some feelings that certain organizations have a greater control over what economic development is and how it’s implemented and we have to address that, and I tried to, at least I think I made a very good first step in that direction with the recommendations,” Talente said. “Whether it’s real or whether it’s not real, perception is reality in some folks’ minds, so when you’re working in the political world where a lot of it is on populist opinion, you need to be mindful of that and try to address it as best you can.”

Talente said the community’s “lack of understanding and spreading of misinformation has undermined credibility” for the EDP.

“Community outreach and education is a paramount effort of economic development. It needs to be done more; it needs to be more proactive,” he said. “Because in the absence of information, those opinions become the reality.”

Renaming the EDP at the same time it is restructured will help with public perception issue, Talente said.

“It’s just something different, just from the public perception of we’re reorganizing the EDP, we’re trying to make it more a development corporation,” he said. “… I don’t care what you name it. I think that’s a good one — it’s to the point.”

Talente said the new DBDC would need to maintain a majority of private-sector members on its board in order to maintain financial support from the private sector.

“I can’t stress enough … the need to leverage your public investment by keeping the private sector engaged and at the table,” he said. “I think that is one of the most critical things this community has going for it, which is the private sector is willing to put up (money).”

Talente said he looked at nine other economic development groups in the area and all of them had less than 50 percent of their funding coming from the private sector. In Boyle County, the EDP has more than 50 percent of its funding from private sources.

That level of private support is “tremendous,” but it won’t stay that way if the governmental partners are given a majority presence on the board, Talente said.

“If you want private sector dollars, you tend to have to have a majority private sector board. That’s usually the tripping point for the private sector,” he said. “The comments I get back, not just from here, from everywhere, is ‘I already pay my taxes. If you want to have a government-controlled organization, use my tax dollars and do it. If you want me to put more on top of that, then I need to know that my voice is going to be heard louder than everybody else’s.’”

“I think that’s a fair argument,” Talente said. “I know not everybody agrees with that, and I’m OK with that. It’s a debatable point.”

“At some point in time, in the future — five, 10, 20, 100, 75 years from now — I would like to see economic development be a single entity and the (Boyle County Industrial) foundation become part of that board, rather than being separate,” he said. “Not because I don’t think the foundation is valuable or does good work — it does. But the reality is as we build these relationships and the partnerships continue to grow, it just makes sense to have it all in one house from an efficiency standpoint, from an implementation standpoint.”

The DBDC would be in charge of all the core economic development responsibilities, including business retention, recruitment and expansion; workforce development — which is currently managed by the chamber; and entrepreneurial development.

The Heart of Danville and Main Street Perryville’s responsibilities would include “downtown events, beautification, marketing (and) business advocacy,” according to Talente’s proposal.

The Convention and Visitors Bureau would take care of “tourism, recreation, events promotion (and) marketing,” while the chamber would handle “business events, networking and business advocacy.”

The industrial foundation has “property development and management” listed as its responsibility in Talente’s plan. 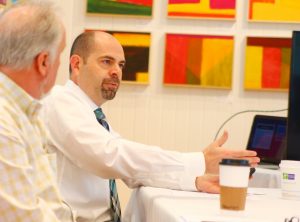 Talente said under the current EDP structure, “a lot of the individual entities don’t really understand where they fit, what their role is, how they fit in the great economic development (plan), how that meshes with their mission.”

“That perception permeates outside of the EDP partners as well,” Talente said.

The DBDC plan tries to address that by giving multiple agencies back the reins to handle their own affairs. DBDC policies would only apply to DBDC employees, not any of the employees of the other entities, Talente said.

“If the chamber feels that there is something that needs to be advocated for … even if it goes against what the DBDC wants, they should be able to do it and do it freely and the DBDC needs to understand that that’s their mission,” he said. “That’s an example of how we need to be more clear … under the current situation, if the EDP board votes that ‘we’re not going to talk about that,’ then the chamber can’t comment, or the Heart of Danville can’t comment.

“They need to be free to do what they need to do, and we’ll work together,” Talente continued. “.. That’s how these organizations should work, because you each have your own individual missions that you need to address.”

A story about the public’s reaction to Kyle Talente’s full proposal for the strategic economic development plan will appear in the weekend edition of The Advocate-Messenger.

Heart of Danville honors Tom Poland as volunteer of…