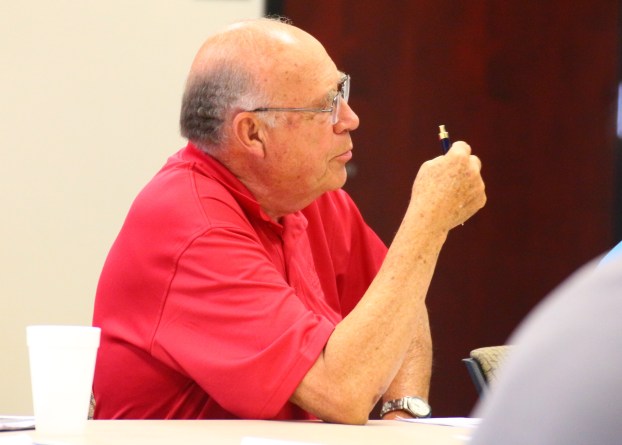 Magistrate Phil Sammons says he is not impressed with the current president and CEO of the Danville-Boyle County Economic Development Partnership, Jody Lassiter.

The Boyle County magistrate voiced strong displeasure with Lassiter’s performance during a discussion of a plan to reorganize the EDP Thursday night.

Sammons said he disagreed with the plan when it came to keeping current EDP President and CEO Jody Lassiter in his outward-facing job, trying to bring new businesses into Boyle County.

“I’d have to give him probably an F on bringing other employment into Boyle County,” Sammons said. “He attends job fairs, but I’ve attended job fairs before and I think the biggest thing a job fair is meeting people and having parties. I don’t think it’s ever produced anything. And I don’t know of any factories or anything that he’s brought in in the seven or eight years we’ve had him here, but he’s done a wonderful job with our present people, keeping them here and talking to them.”

Sammons suggested instead that Lassiter be made “president of the industrial park” and that the EDP should hire a new person in the CEO role to recruit businesses.

“The way it is now, we don’t have that (recruitment) person — I don’t feel. Because he’s been here that long and he’s brought, as far as I know, zilch,” Sammons said. “We’ve increased what we’ve got but the way I look at it, our factories would have increased anyway if he hadn’t have been here.”

Restructuring of the EDP has been proposed by Kyle Talente with RKG and Associates, the consulting firm hired for about $83,000 to create a strategic economic development plan for Boyle County.

Talente told Sammons he thinks it’s smart to have economic development staff “do what they do best.” He said he believes Lassiter has “substantial” abilities to recruit businesses and that business locations in Boyle County would not backfill so quickly when a business leaves without Lassiter in his current position.

Talente has previously said he believes Lassiter’s abilities, experience and connections are “invaluable” to Boyle County.

Sammons said Thursday he has “a bad feeling” about the situation.

“I think we’ve been pouring money down probably a hole. I think we could use this money more wisely than what we got out of it,” Sammons said, though it wasn’t clear if he was referring to EDP funding in general or the strategic economic development plan being created by RKG.

“The worst thing you can do is make an investment in something you don’t want, because you’re never going to get support behind it,” Talente said.

But if the community does see the value, “then let’s get behind that and let’s support it.”

“I’ve been a hunter all my life and the old saying is if you got a dog that won’t hunt, you shoot him,” Sammons said. “So we need to take that step and move forward. I think we’ve messed around long enough without getting the results we need.”

Other elected officials did not feel the same way as Sammons.

Magistrate John Caywood said he thinks there needs to be more community buy-in for economic development. Officials need to find ways to give the growing retiree community in Boyle a bigger role, he said.

“These retirees come here and yet when they have ideas, when they have something to add, I don’t think they find a market here,” Caywood said. “There’s not a place for them to go and say, ‘I’ve got an idea that may help.’ They don’t see the welcome sign out. … I hear that. Because then we become old Danville and new Danville and I don’t like to hear that.”

Talente said the addition of a chief operating officer for the EDP would allow development of programs to get retirees involved. With current funding, however, it wouldn’t work to add such an expectation on top of everything else.

Danville City Commissioner Kevin Caudill said he thinks elected leaders need to be doing a better job of modeling buy-in to economic development for the community.

“I don’t think that, as a governmental body, that we’ve done a very good job of building momentum for the EDP itself,” Caudill said. “It’s always been some controversy or some personality conflict or something that’s really kept (support low). It gives the impression that the commission wasn’t behind the EDP and I think that the public has gotten that feeling and I think it’s up to us to change that — or it needs to start with us.”

“This is a great time to do that,” Caudill continued. “A new plan, new ideas — let us get behind it and then the community will, as well.”

Later in the meeting, Boyle County Industrial Board Chairman John Albright said he disagrees with Sammons’ opinion of Lassiter, who serves as president and CEO of the industrial foundation as well as the EDP.

“I disagree with Phil’s comments about our executive director, Jody,” Albright told Sammons. “With my role as past EDP chairman and I’ve been the industrial chairman since 2009 … I worked firsthand with him. I respectfully disagree with your position, your take on his job. I see a lot of behind-the-scenes stuff that goes on, that happens and it’s not his fault.”

Albright said it’s true that everyone can always do a better job.

Sammons responded that he wasn’t talking about Lassiter’s role for the industrial foundation, but his role for the EDP of recruiting businesses.

“It’s all the same to us,” Albright said, adding that he thinks Lassiter does a good job all around. “Your comments were out of place, I felt like, and I respectfully disagree.”

Toward the end of the meeting, Sammons’ comments arose as a topic once more, when community member Randy Graham stated support for them.

“I want to concur in a positive way that Mr. Sammons was right on target regarding (Lassiter),” Graham said.