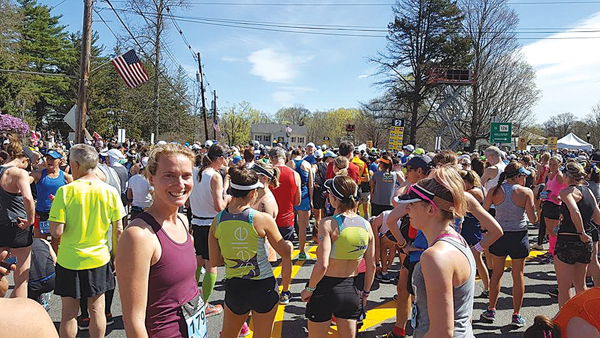 Submitted photo Beth Morgan of Danville, facing camera at left, ran in the 2017 Boston Marathon on April 17. It was the 50th anniversary of Kathrine Switzer becoming the first woman to officially run in the race, making the run even more significant for Morgan.

After years of narrow misses and injuries, making the field for this year’s Boston Marathon was an historic accomplishment for Beth Morgan.

But add to that the special anniversary celebrated by the marathon of the first woman to officially enter the race, and her trip to Boston took on a whole new level of meaning.

Fifty years ago, Kathrine Switzer entered the marathon at a time when women weren’t accepted into the race. She signed her named as K.T., and due to the cold conditions that morning in 1967, she wore baggy clothes and a cap which unintentionally concealed her identity.

Switzer finished the race, but was disqualified. She was even accosted on the course by a race official, who was enraged that a woman dare enter the event.

Switzer was also in the field this year, along with Morgan and four other local runners.

One year prior to Switzer, Bobbi Gibb was the first woman to run in the race, but she had to sneak onto the course. She hid in bushes and entered the course without a race bib.

It seems absurd today that a woman wouldn’t be given entry to the race — there were nearly 14,000 women entrants in this year’s marathon with almost 12,000 finishing — but Morgan points out how recent Switzer’s accomplishment was.

“I’m 38-years old, so it was almost in my lifetime when women weren’t allowed to run marathons,” Morgan said. “Today, that seems crazy, outrageous. I think about what she did, and when you look at the race pictures from that day, the anger on the face of the race official’s face, and he assaulted her to get her off the course. That’s outrageous because we have every right to be there, too.

“I know times are different now, but when you think it was only 50 years ago, that’s not a lot of time.”

“That was no big deal,” Morgan said. “Those are things we enjoyed and we were good at them. When you’re young, you don’t think about those things.”

Morgan, a Danville resident who works at Centre, was one of five locals to run in Boston. She was joined by Joe Pawlish, David Anderson, Keith Stillwell and Centre student Chloe Grove. Morgan finished in 3 hours, 45 minutes, 6 seconds. Pawlish was the top local finisher, coming in at 3:25:11, followed by Anderson at 3:28:19. Stillwell finished in 3:51:07, and Grove came in at 3:47:39.

Morgan missed the cutoff for the 2016 race by less than one minute, and injuries kept her out of commission in late 2015. She tried again to qualify in the 2016 Louisville Derby Festival Marathon, qualifying this time by more than six minutes.

After first, it was all excitement in realizing a goal she had been chasing and working towards for over three years. But when September rolled around and she registered for this year’s race, the nerves started to set in.

Once December 26 rolled around, she started her training cycle and had something to preoccupy her nerves. However, that serenity ended the week of the marathon.

“You have this goal and you know you’re working for it, so I didn’t get nervous until the week of the marathon, and then I was a basket case,” she said. “I was thinking, ‘What if I get sick? What if I get injured?’ It was, what if, what if, what if. The butterflies don’t really start until the night before and the morning of, because the enormity of what I’m about to do hits me — I’m about to run 26 miles … why am I doing this?”

Throughout training, her goal was to run Boston in 3 hours, 30 minutes; in her words, she wanted “to kill it.” Injuries crept up throughout training — she dealt with knee, quadriceps, hamstrings and hip issues — so as the date of the race got closer, her expectations changed.

It wasn’t until she was on the starting line, though, when she finally settled on enjoying the experience and not worrying about pace or time.

“I knew going in 3:30 wasn’t going to happen, but right up until I got to the line, I was thinking I could hammer out another BQ (Boston qualifying time), which would have been 3:35,” she said. “I get up there and all the sudden, the heat, the sun was beaming down on my shoulder, I could already feel the sunburn, and I didn’t want to risk it. The heat combined with the risk for injuries, I decided right there to just not worry about it. I wanted to soak it up, enjoy the experience.”

And she’s glad she did. Everyone comes into Boston with preconceived notions of how it will feel to run in the race, and Morgan’s expectations were blown away.

“Everything they say about Boston is true. The cheering, I can’t even put it into words, it was magic. The last three or four miles when you get into the city, it’s deafening. You feel like you’re Meb Keflezighi. They cheer for you no matter who you are. … I smiled a couple of times even though I hurt so bad, You couldn’t help but smile because people were cheering so loud.”

She was joined in Boston by her husband, Adam Wade, and their two children, Sasha and Maya. For Morgan, running marathons is not just about her but also the example she’s setting for her children.

“It’s an experience I can share with my own daughter,” Morgan said. “It’s really important to take my kids with me when I ran Boston. … I get a lot out of running personally, especially a training cycle, but I do it for my kids, too, to show them that you can do hard things, you just have to commit to it. You have to do the work and trust the process and have faith in yourself.”

While Morgan’s finishing time at this year’s Boston Marathon doesn’t guarantee her a spot in next year’s race, she said there will be other opportunities for qualifying for another Boston.

“Boston has been my dream for a couple of years now. It’s been my goal for three years, I have been working at it,” Morgan said. “It’s competitive and to be there on that course, knowing I was running in the footsteps of people who had been there before, like Kathrine, these legends … all these women who are such positive role models, I can’t even describe the feeling knowing I was running in their footsteps.”