The history of a 1911 Craftsman house in Danville 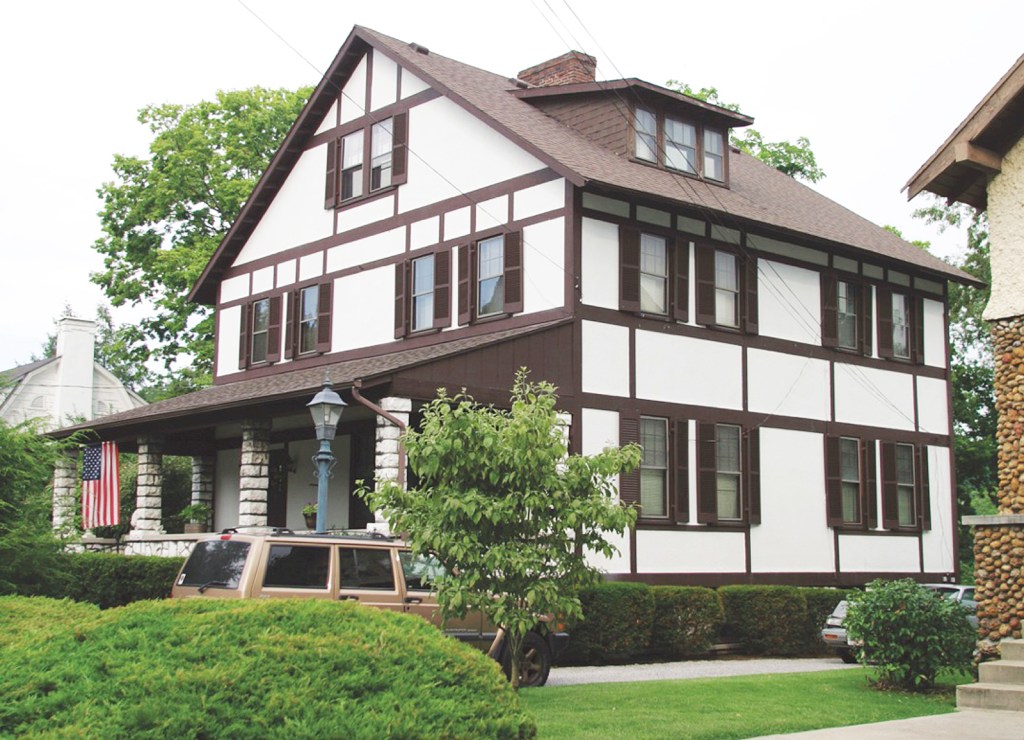 Photo by Ray Stubblebine A craftsman-style house on Lexington Avenue built in 1911 was designed by Gustav Stickley, a leader of the American Arts and Crafts Movement.

A three-story Craftsman house built in 1911 near the intersection of Lexington Avenue and Wilderness Road has been the home of Ruth Watson since 1981.

This stately structure stands three stories tall and has a porch with square pillars made of stone across the front with the entrance on the left side.

Although she and her daughter Lesa Taylor have spent many hours working on the family home in the years she has lived there, few changes have been made to the house.

“When I bought the house, the exterior was covered with vines and needed painting,” she said. “The interior was a disaster, too.

“I was shocked to find part of the beautiful casement windows extending across the dining room were boarded up with cheap plywood and painted,” she said.

The house looks much like it did when it was built in 1911 by John Lawwill, a local attorney.

The rooms inside the house have chestnut woodwork and the exterior is covered with cement plaster with wood trim. More than 30 windows allow natural light inside the house.

The foundation and part of the chimney are made of stone. The one chimney in the center of the house has four fireplaces including one in the basement.

“We tried to do everything to make it look as historic as we could,” Ruth said.

The current furnishings also are similar to the early 1900s.

A formal living room runs across the front of the house. It has period furniture and an antique light fixture, formerly used in an estate house in South Carolina.

A brass door knocker with the “Mannini” name engraved on it is still in place. John Paul “Peck” Mannini was a former owner of the house and operated a pool room in Danville.

A dining room opens to the right of the living space. One of two butler’s pantries was converted into a bathroom on the main floor.

“We did most of the work on the house starting in 1985 in the kitchen,” said Ruth as she talked about her “Denmark kitchen.”

She has a collection of Denmark blue dishes and added a tile backsplash to match above the kitchen counter top. The same shade of blue is carried out in the décor of a downstairs bathroom. 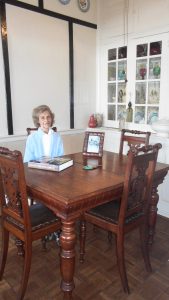 Photos by Brenda S. Edwards
Ruth Watson sits in a breakfast nook in the kitchen.

The kitchen also had a butler’s pantry that has been converted into a small dining area. A small dining table and chairs in the room were shipped from Denmark by Ruth’s sister who lived there for a few years.

Ruth took on the task of scrubbing the kitchen floors which were covered by three layers including carpet.

After it was cleaned, she and her daughter placed wooden parquet blocks on the floor.

All three bedrooms are on the second floor along with a den, bathroom and sunporch.

A third-floor attic room was converted into a studio apartment when Ruth moved into the house. Improvements were made for a living space for Lesa and also was her son Jacob’s office.

The house sits on an acre and half lot and has the original carriage house in the back yard.

They also got an old iron fence from her family homeplace in Hyden and installed a fence along the  property line the back yard.

The Lawwill house is listed in the Lexington Avenue-Broadway Historic District on the National Register of Historic Places.

William Scott Lawwill built the craftsman house at a cost of $7,000 using plans by Gustav Stickley (1858-1942), a leader of the American Arts and Crafts Movement.

Stickley offered craftsman home plans for middle class families and recommended using materials native to the location of the house, according the “Stickley’s Craftsman Homes” book written by Ray Stubblebine, a photojournalist of New Jersey.

The book has plans, drawings and photographs of craftsman houses similar to the Watson  residence.

Lawwill was an attorney in 1901 with an office at 305 West Main Street. He and his wife, Marjory, were boarders at 232 W. North Third Street.

Lawwill and Marjory Steel Shelby were married on August 14, 1901, and spent their honeymoon at Crab Orchard Springs resort.

They had one daughter, Marjory Shelby Lawwill.

Lawwill was born February 25, 1872, in Mayslick in Mason County and was a son of Dr. William Henry Lawwill and Mary Jane Wells of Mason County.

He was a farmer and lumberman and lived in Danville in 1920, according to the 1920 U.S. Census. He died at his home on Lebanon Road when he was 66 years old.

The elder Marjory was living with her daughter, Marjory, and her husband, John V. Cook in Chicago in 1940, Census record show.