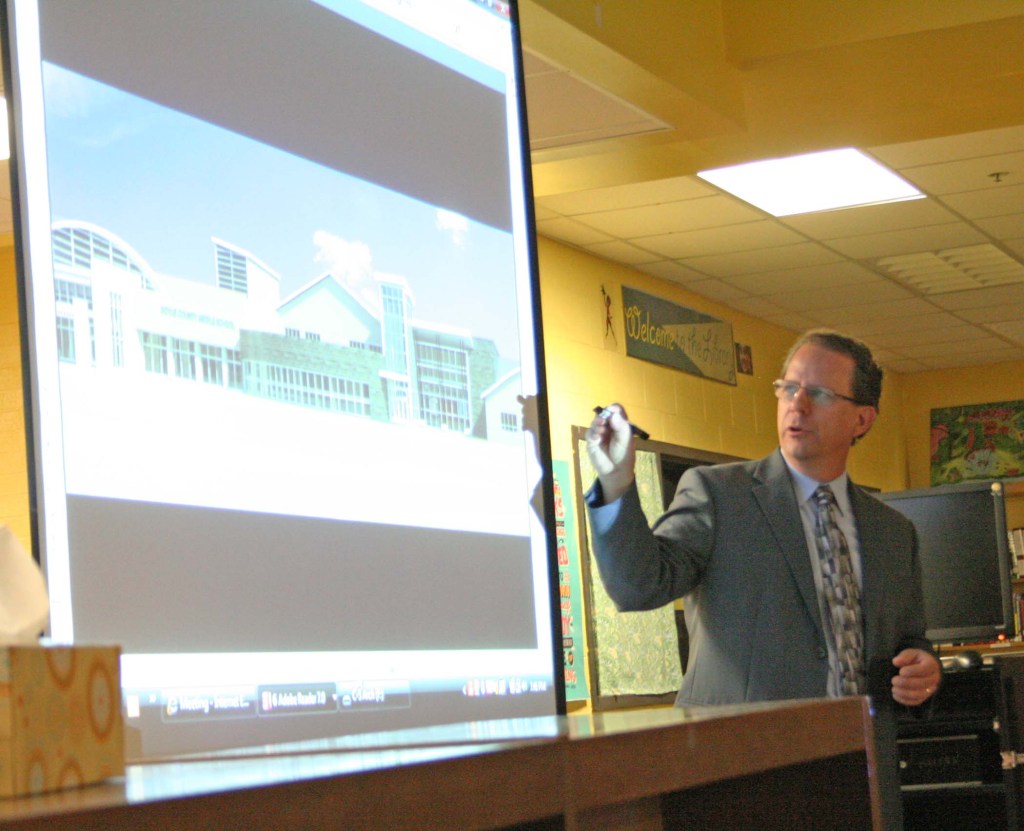 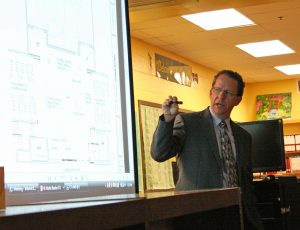 Plans continue moving forward for the new Boyle County Middle School, according to a presentation by Tony Thomas, architect for Clotfelter-Samokar, at Thursday’s board of education meeting.

The school will be on Cunningham Drive, behind Centenary United Methodist Church.

Thomas showed more detailed renderings of the library and media center area, which will also serve as a collaborative learning space for students. The renderings include a “Genius Bar” (coined by Apple stores, referring to a technical support station) along with comfortable seating areas for students, and an area with risers for students to sit on.

Board members also saw the most-up-to-date renderings of the kitchen area, serving line and cafeteria space. Thomas said they had learned “a few things on this kitchen.”

For the most part, that design is ready, he said, but there’s still time for small things to change.

“We’re kind of locking in the walls, doors and windows.”

Thomas also showed officials the early renderings of the exterior of the building, explaining that the colors and materials weren’t set yet, just the shape of the building.

“These colors can change,” he said. 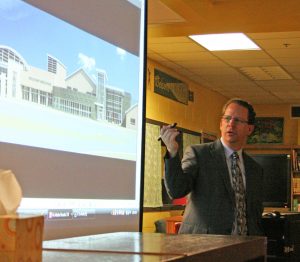 The gymnasium has a rounded top, the proposed auditorium has space for a fly loft, visible from the front, and more.

Employees in the audience vocalized support for the look. The board also agreed, giving their approval to the plan.

Thomas said they were still “playing” with some of the roof lines and details of that nature.

• recognized employees who were named the respective employees of the year at the schools. Each was given an award;

• approved a two percent pay raise to every employee in the district (Superintendent Mike LaFavers says the district’s financial situation is “really strong”); and

• approved a $1 per hour pay raise to every bus driver, making starting pay at $14.51 per hour. “We found ourselves a little bit behind central Kentucky districts in bus driver pay,” said LaFavers.

A preliminary rendering of the new Boyle County Middle School, courtesy of Clotfelter-Samokar.
The rounded roof on the far left belongs to the gymnasium, while the tower on the left is part of the proposed auditorium in the back. The dark stone area in the center is office space, while the tower with windows would be the school’s entry way. The windows to the right of that can see into a hallway and the media center, which will also have windows on the back overlooking an outdoor class space, to give plenty of light.