Ernest Gipson, Jr., “June,” 87, of Danville, passed away early Thursday at Thompson-Hood Veterans Center in Wilmore, KY. He was born in 1929, in Junction City, Kentucky to the late Ernest Gipson and Lena Benedict Gipson. 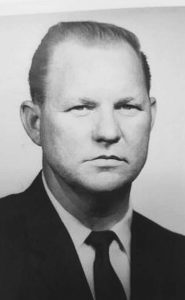 Ernest graduated from Junction City High School in 1947 and joined the Army Air Corp. He re-enlisted in the brand new United States Air Force and spent the next 22 years serving throughout the world including Germany, Libya, Saudi Arabia, Turkey, Japan and the United States. On his second tour in Germany, Ernest served on the Inspector General staff and traveled extensively throughout Europe before retiring as a Senior Master Sergeant in 1969.

Shortly after retiring he returned home and put his AA Degree in Electrical Engineering to use by founding Gipson’s Electronics, a highly successful business for 30 years.

Ernest enjoyed many hobbies of which fishing, gardening and sports watching were favorites, followed closely by sitting on his back porch on a warm summer night.

Prior to health issues he was an active member of the Junction City First Christian Church.

Ernest was preceded in death by his loving wife of 40 years, Constance Ann Schuler, and daughters, Robin Ann Gipson and Diana Gwyn Gipson.