Jean Ann Elizabeth Alarie, beloved mother of Jeff, David, Trish, and Dianne and equally beloved by Noel, her husband of 62 years, succumbed to the ravages of dementia on April 16 at the age of 85. Her wishes for cremation have been honored. A memorial service will be planned for a later date. 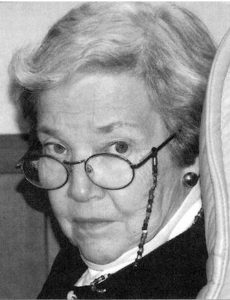 Born in 1932, Jean, the only child of Howard and Eleanor Compeau, grew up in Bay City, MIchigan, and attended grade and high schools there. She and Noel married July 17, 1954. They had been high school sweethearts, and as luck would have it, Noel drew the long straw and was posted as a medic on Oahu during the Korean War, so they spent most of their first year of marriage in Hawaii. They made many lifelong friends and cherished memories during that time, and in 1986 began revisiting the Islands each year through 2006.

The family moved to Danville, Kentucky in 1973. Dianne now lives in Lexington and Jeff (Kristine), David, and Trish are Wisconsin residents. Grandchildren Nathan and Sara also live in Wisconsin.

Jean was deeply involved in the family’s pizza franchise business, serving as financial officer and head problem solver. She had a wonderful way with people which made it easy to defer to her when a sticky problem arose. In her spare time she was an avid reader and kept a log of the books she read, hundreds of them. She read widely, both fiction and nonfiction, and her favorite author was David Halberstam, whom she grieved when he met an early death in a car accident.

Jean was also a great organizer and dozens of chronological and carefully annotated family picture albums testify to that. In spite of the now ubiquitous means of capturing digital images, she remained faithful to her 35mm film camera. Until late in life Jean could still summon the names and descriptions of all her childhood pets, mostly dogs, and a select group of black cats — Putnam, Bill, and Miss Kitty — later lived a pampered life in her care.

Two special ladies were as close to sisters as an only child could have. Noel’s brothers married Marlene and Connie, who shared many laughter- and tear filled sessions with Jean, reviewing their lives with Alarie men. Their long lifelong friendship was a boon to us all.

Lots of good people have populated this Earth, and Jean was one of them. Here is how one of her children put it: Regarding mom’s obituary, we have some time to get it right, or as close to that as possible— accepting in advance the impossibility of capturing in words what she meant to us all. We will do our best to convey how decent and kind she was, through and through, and how much everyone who knew her benefited from her presence in their lives for so many years.

Jean’s family is thankful for the good care she received at Morning Pointe of Danville and more recently at The Willows of Harrodsburg. When you make your next donation to the Alzheimer’s Association, The Humane Society, The Salvation Army, Hospice, or your favorite charity, think of Jean nodding in approval.