Peggy Young Caldwell, 86, died peacefully on April 14, 2017 of natural causes at her home. She was born April 16, 1931, in Pulaski, Tennessee, daughter of the late Amos and Gladys Browning Young. 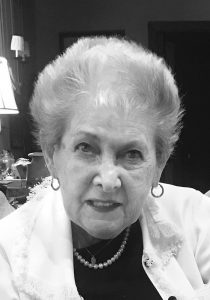 Peggy was much younger than her only sister, Frances Young Daly, but were close their whole lives. It was while visiting her sister in Danville that Peggy met her late husband, Clemens Caldwell.

Peggy grew up in Pulaski and graduated from Giles County High School then earned a degree at Martin College as well. She was athletic and played basketball in high school; a passion for UK basketball was something she had her entire life. Tennessee Walking horses, which she showed and bred for over 50 years, were her greatest passion and her favorite horse was Ebony Ace.

For 28 years she has owned and cared for Razz who still stands at her farm.

Her other passions were animals of all kinds, big band music, flower arranging, bridge, and golf. She was a championship golfer and very proud of the “hole in one” she made.

Peggy was very creative and took pride in decorating her house, especially for Christmas. She loved music and was an accomplished pianist. One of her favorite songs was “Moon River” which she would play upon request.

She had a special affinity for the chickens that her husband raised and occasionally took in the wounded ones as pets. She was a member of The Presbyterian Church.

In addition to her late husband, Clemens Caldwell, she was predeceased by a daughter, Monnie Browning Caldwell.

Peggy is survived by a daughter and her husband, Jane Clemens Caldwell and Thomas Amoreno of Durham NC; a son, F. Fox Caldwell of Danville; a granddaughter and her husband, Summer Caldwell Warren and Ben Warren of Danville; a grandson, Samuel Caldwell Kenkel of Austin, Texas; a niece Mary Richter of Lookout Mountain, Tennessee; three nieces, Monnie Gay Long of Winchester, Elizabeth Van Nagell of Winchester. and Juliet Gay of Lexington.

Visitation will be 5 to 8 p.m., Monday, April 24, 2017 at Stith Funeral Home, Danville. A private memorial service will be held at a later date. Memorial donations are suggested to the Danville-Boyle Co. Humane Society, The Presbyterian Church or Heritage Hospice. The online guestbook is available at www.stithfuneralhome.net.