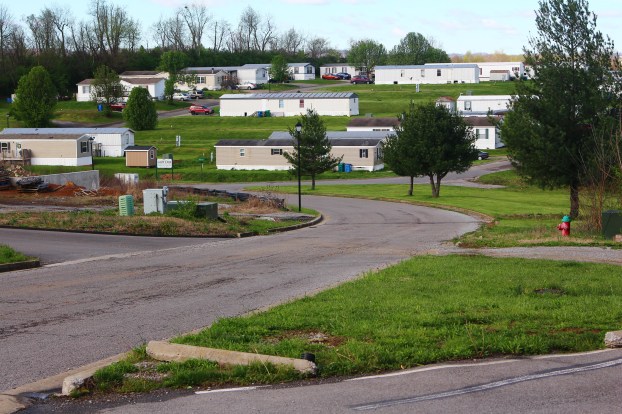 Ben Kleppinger/ben.kleppinger@amnews.com Centre Estates Drive, located off of Highland Court along Hustonville Road in Danville, never had sidewalks installed by the developer when it was first built. Now, more than 14 years after the developer left the project unfinished, the city is going to put the sidewalks in.

Sidewalks coming for Danville street after more than 14 years

A Danville neighborhood is getting sidewalks installed more than 14 years after a developer left the job undone.

The city aims to complete sidewalks along Centre Estates Drive, located behind Aldi off of Highland Court, by “mid-summer, say July or August,” said Tom Byerly with the Danville City Engineer’s Office.

The sidewalks should have been installed by the developer back when the neighborhood was first constructed, but that never happened, Planning and Zoning Director Paula Bary said. The P&Z Commission voted this month to approve spending money for the sidewalks that had been held in an escrow account since 2003.

When a developer is building new roads, it agrees to bring those roads up to city standards, Bary said. Developers get a letter of credit that assures funding is available for the required work even if they fail to complete it, she explained.

“That guarantees that, say the developer walks away from the project or just can’t get it finished, that holds up their line of credit, so we go cash that and get the money and then we will put it in an escrow account,” she said.

Bary said the funding for Centre Estates Drive’s sidewalks has “been in an account for a long time and we just haven’t had the cooperation we needed from the city in order to complete the project.”

But this year, Byerly and the City Engineer’s Office are working with P&Z on the sidewalks, as well as two other incomplete projects that similarly had letters of credit cashed in the early 2000s.

Byerly said letters of credit are typically cashed about three years after a developer fails to complete a project. If that’s true in the Centre Estates case, it’s been around 17 years since the developer left the project.

Why did it take so long for these projects to get underway?

“I really can’t answer why it took 14 years, other than it just didn’t get looked at,” Byerly said this week. “… It shouldn’t have taken that long.”

While there’s been a mobile home park off of Centre Estates Drive for a while, there’s now new apartment buildings being constructed, which led the city to “see a lot more need for this sidewalk to be developed right now,” Byerly said.

Because of the time that has elapsed, Bary said the amount in escrow for the sidewalks is no longer enough to pay for the entire project. She asked not to have the amount of funding available disclosed, as it could affect bid prices from contractors.

Byerly said the escrow funding should allow the city to install sidewalks all the way around the east side of Centre Estates and about 265 feet of sidewalk on the west side. The city will then kick in some additional money from sidewalk funds already budgeted to be spent this year in order to complete the sidewalks. The city is going beyond the original scope of the project as well, extending and improving sidewalks all the way to Fourth Street along Highland Court, he said.

Byerly said he thinks the retention basin on Maple Tree Place should be easily completed with the $23,000 available for that project. If any such project doesn’t cost as much as what’s in the escrow account, the remainder goes back to whoever holds the right to those funds — it could be a bank in cases where developers went bankrupt, he explained.

The streetlights project on Fox Harbor Drive won’t be done as quickly: The city has to go back to Kentucky Utilities and get new prices for streetlights and then compare that cost to what’s in the escrow account, Byerly said.

“I’m very glad that Tom Byerly and the City Engineer’s Office is helping us get these completed,” Bary said.