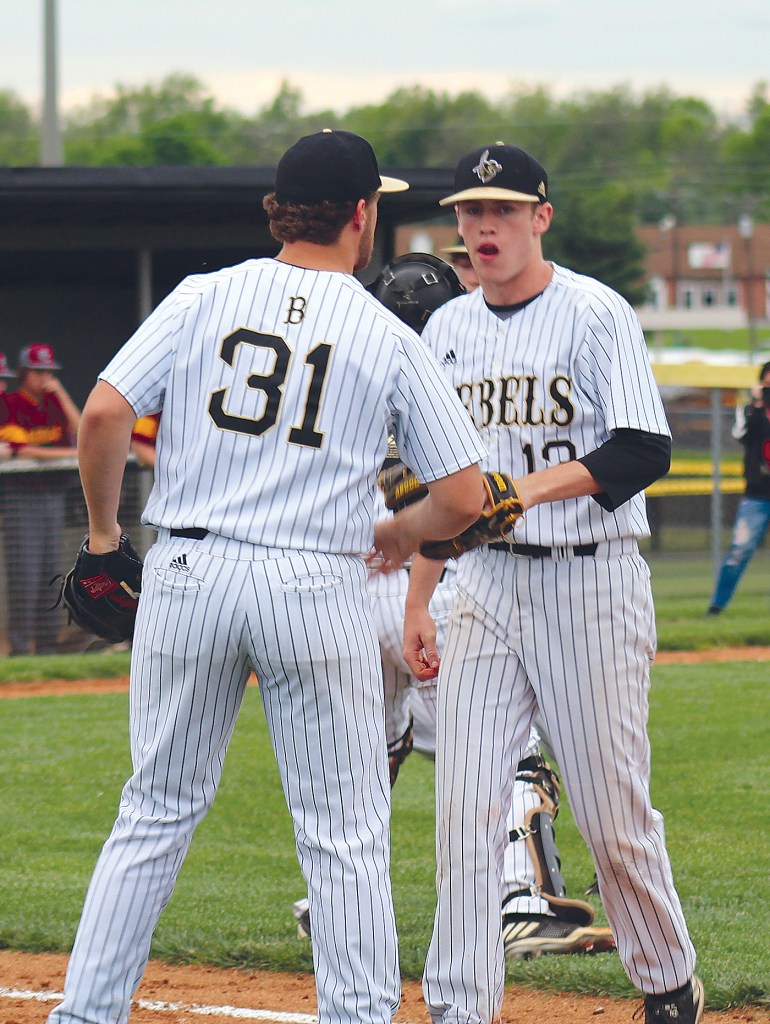 Mike Marsee/For The Advocate-Messenger Boyle County pitcher Sam Tiller, right, is congratulated by first baseman Alex Sergent after retiring Garrard County in the third inning of the Rebels’ 1-0 victory Monday. Tiller struck out 11 batters in a complete-game win; Sergent had the only RBI of the game on a bases-loaded walk.

Sam Tiller had an inkling that this was going to be a good day.

The Boyle County right-hander had endured some rocky first innings this season, but it was smooth sailing for him Monday night, as he outpitched Garrard County’s Drew Delili by a slim margin to lead the Rebels to a critical district win in a compelling pitchers’ duel.

The junior right-hander struck out 11 batters and allowed only three hits in the Rebels’ 1-0 victory, and he said he felt good before he took the mound.

“Today I just took a little bit longer warming up in the (bull)pen, and I think that helped me loosen up a little bit more for the first inning and got me settled in,” Tiller said. “I felt good in the ’pen, and it transitioned into the game today.”

Tiller needed only 74 pitches — 57 of which were strikes — to give host Boyle (17-5, 2-0 45th District) its second shutout in as many district games. And he needed only to retire Garrard’s first three batters on strikeouts to impress Boyle coach Kyle Wynn.

“The only hiccup Sam has had has been in that first inning,” Wynn said. “He hasn’t pitched bad, he just hasn’t been as crisp in the first inning. So once he got that first inning under his belt, we had a pretty good idea he was going to settle in for the rest of the game, and sure enough, he did. And obviously we needed him today.”

Delili was sharp in five of the six innings he pitched for Garrard (3-13, 0-3). He allowed only four hits and three walks, and all three walks came in the inning when Boyle scored the game’s only run.

It was Tiller’s second victory in a pitchers’ duel against a district opponent in less than a week. He threw a nine-inning shutout in Boyle’s 2-0 victory at Lincoln County six days earlier, striking out 11 batters in that one as well, and he said he enjoys battles such as these.

“It’s a fun game. You’ve just got to throw and let your defense play for you and hope your guys get a couple runs across,” he said.

The only run the Rebels got came in the third inning. Garrard’s Delili hit one batter and walked two others to load the bases with two outs before Alex Sergent drew a walk that forced in a run.

“That’s something that we’ve been fighting through all year. We’ve got one inning that’s been biting us in the butt,” Garrard coach C.J. Lynn said. “It all comes down to confidence. A few things go our way, more confidence in our direction. In the first two innings Drew had a lot of confidence, and after the third he came in and I talked to him, and he went back out there and showed me that he could do it.”

Three more runners reached base against Delili, but none got past second base. Tevin Leigh and Tristen Helton had doubles for Boyle, and Helton and Ty Dragan had singles.

Only one Garrard runner made it to third base against Tiller, and he was thrown out while trying to score on a potential passed ball.

Tiller struck out five of the first six batters he faced and allowed only one hit and two baserunners in the first five innings.

“My curveball was working pretty good today, and I felt like I was really staying down in the zone with my fastball,” he said.

Connor Isaacs, Collin Carver and Anthony Justus had singles for Garrard, which has lost six of seven games and was shut out for the sixth time this season.

Lynn said the Lions are suffering from the same lack of confidence at the plate.

“When we get our confidence up, we may hit the ball a little better,” he said.

Garrard will get another shot at Boyle today. Monday’s game was rescheduled twice after rainouts, resulting in a rare home-and-home series on consecutive days.

“I love it, because you see a true 1 and 2 (pitcher),” Lynn said. “It’s (like) what people see in college. You can’t just save your 1 for each time you play. It gives both teams an idea of what we can and can’t do.”

Wynn said everything except the starting pitchers will be pretty much the same — including the importance of the game.

“Win or lose, you’ve got to have a short memory and get back at it, because it’s just as important tomorrow,” he said.