Danville eeks out win at Lincoln to keep pace atop district 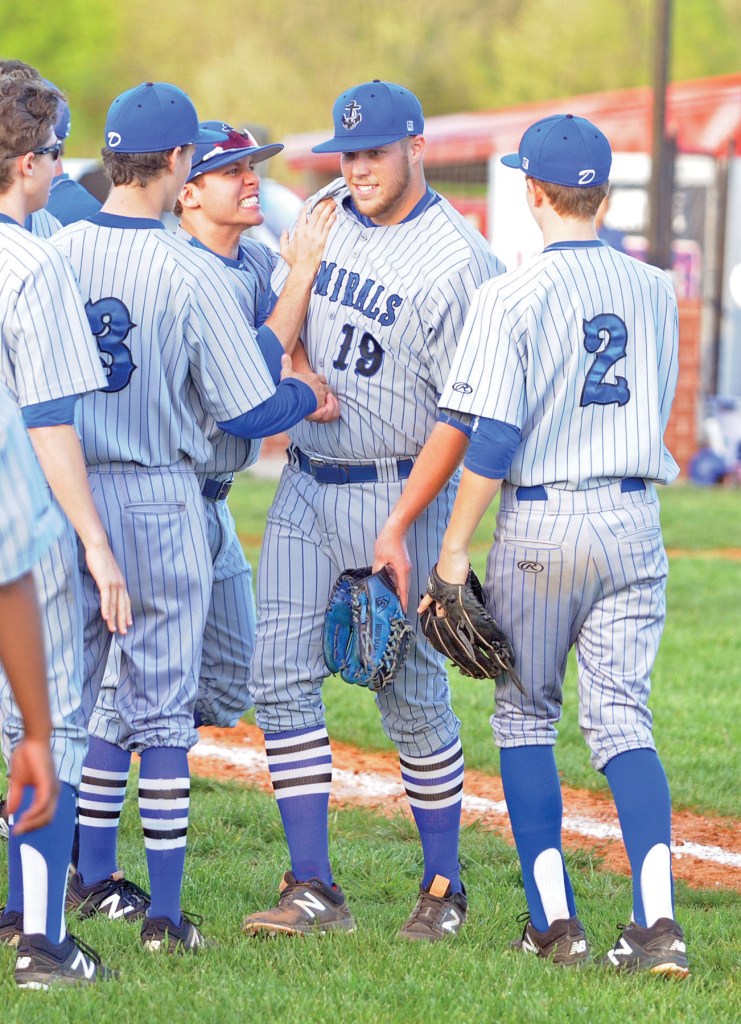 Two of the top aces in the region squared off Tuesday at Lincoln County, with Baxa’s Danville Admirals coming out on top, 2-1.

The final numbers for each pitcher were nearly identical: Both pitched a full seven innings, both allowed three hits, both struck out 12 batters. All three runs in the game were unearned. Horton gave up three walks; Baxa had none. Neither pitcher gave up an extra-base hit. Baxa threw 65 percent of his pitches for strikes, Horton 62 percent.

“Normally, if you strike out 12 times, you’re not winning the game,” Danville coach Paul Morse said. “Luckily, we had a counter to that with Baxa, who had 12 of his own. Both pitchers pitched extremely well, we just had that one inning where they had to make a few more plays. Brian pitched great, that was the difference.”

Danville’s big inning came in the third, when Christian Howe and Hunter Baxter each reached base on an error to start the inning. Baxter’s pinch-runner, D’Mauriae VanCleave, scored on a hit from Ellison Stanfield. Zach Dampier walked with the bases loaded to bring in Mason Schroeder.

Horton threw a strikeout with the bases loaded to end the inning.

Morse said his team struck out looking too often and wants to see a better approach from his players.

“Last time we played them, we scored eight runs and I don’t think we struck out at all that game,” Morse said. “I know we didn’t strike out any off of Horton. Then you go to 12 today, that’s the difference between eight runs and two runs. We’ve just got to put more balls in play. We had too many strikeouts looking, I think four or five of his K’s were backwards K’s. Guys who are around the plate, a good umpire is going to give him those pitches. He was around the plate for the most part, we’ve got to do a better job protecting it.”

Morse said his team has been improving in that regard, but it was just another special night for Horton. The Ads struck out twice against Nelson County on Monday night while putting up 13 runs.

“I think we could’ve got a couple more in that inning, and once again, we’ve got to have that big hit with runners in scoring position,” Morse said. “We didn’t have that today. Then we have some guys that have been playing well but are banged up. (Jacob) Crank couldn’t play yesterday, he got hit with a bat during BP, (Brennan) Washington is having back spasms, we’ve got a couple other guys hobbling around. Hopefully we can get healthy and keep playing well.”

Tuesday’s struggles at the plate weren’t a step back but instead a great game from Horton, Morse said.

“We haven’t had a double-digit strikeout game in a few weeks,” he said. “We’re getting better at that, I just think Horton was good today. He has been that way every time he’s been on the mound except for two weeks ago when we played. His only losses are the two to us. He was just good tonight, he was throwing three pitches for strikes, he was around the plate.”

As good as Horton was for Lincoln, Baxa kept pace.

“I think that was one of his better outings of the year,” Morse said. “No walks, one unearned run, three hits. We don’t drop that ball there and it’s a shutout.”

Baxa’s lone run came in the sixth inning after Cooper Brown scored on a wild pitch. Brown reached scoring position after a dropped ball at first base, which would have ended the inning.

Danville has now won three of its last four games and is 3-0 in the 45th District.

“I’m proud of the guys, this is the time of year that we want to start playing our best,” Morse said. “We’ve been messing with lineups, we’ve got a month and a half of seeing what guys can and can’t do. Now, we’re trying to take it down the home stretch. It feels like we’re playing better all around.”

The Admirals will square off against Boyle County next week in the first of two decisive district games. Both teams are undefeated in district play.

“It’s always a big game,” Morse said. “We had a little bit of stuff prepared for them when we were supposed to play them a week or two ago, but as we get to the weekend, I’ll start to look at them more. I know they’re playing good, scoring runs, Tiller has been throwing really well, I’m sure he will start for them. There will be no surprises. They know that Baxa is going to be on the mound as well. It’s just going to be who executes, who shows up that day.

“It’s always a big game and over the years, since I’ve been coaching, it’s always us playing for that No. 1 seed.”