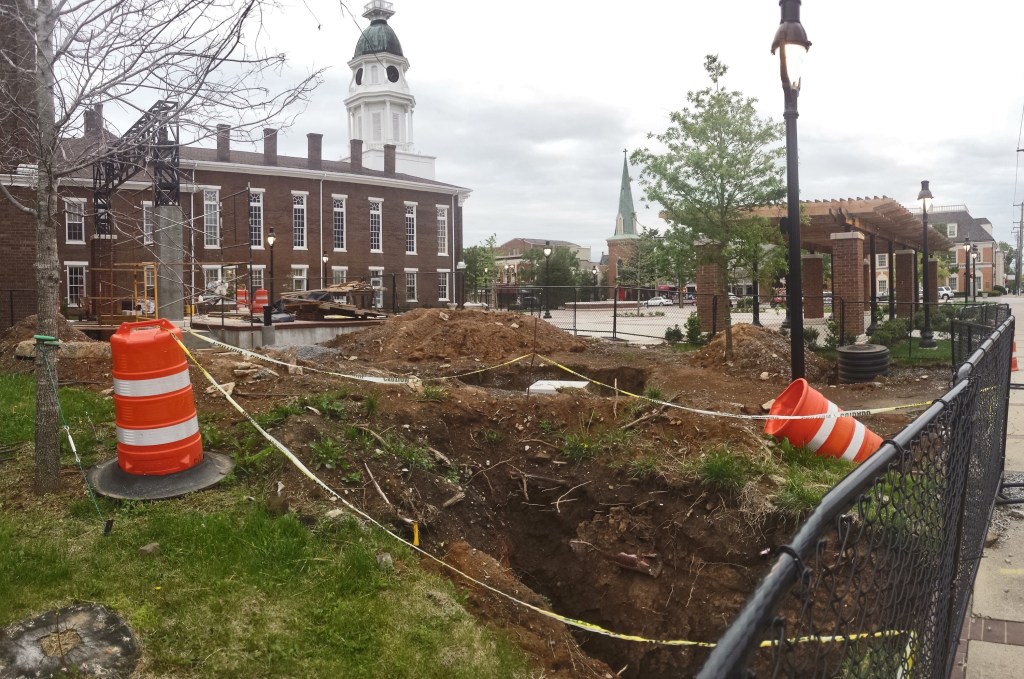 Ben Kleppinger/ben.kleppinger@amnews.com A portion of Weisiger Park where pipes must be run to service a water wall feature remains under construction, but officials say completion of the park renovation project is not far off.

About a year ago, Danville officials were planning for the renovation of Weisiger Park to be complete in time for the 2016 Great American Brass Band Festival.

This year, they’re planning for it to be complete before the 2017 Great American Brass Band Festival.

Danville City Manager Ron Scott said Monday that the city has been “trying to juggle several balls with limited staff in terms of not only our own staff but contracted staff.”

City Engineer Earl Coffey said some subcontractors and workers with jobs to do in Weisiger Park have been working on priority projects at the water treatment plant, which is undergoing a nearly completed $23 million upgrade. But the city is now hoping to knock out the remaining work on Weisiger in short order.

“We hope that work occurs continuously now until it’s done,” Coffey told city commissioners Monday night. “Believe it or not, there really isn’t that much time involved with finishing some of the work that’s left.”

“The mason will be done tomorrow. Then the plumber — if we can get the plumber mobilized by the end of the week, maybe by the first of (next) week, we’d be doing landscaping,” Coffey said. “We’ll just play that out this week and try to continue to communicate with our (subcontractors) and see if they can get motivated.”

City Commissioner Rick Serres said he was glad to hear a “positive note” on the park’s progress.

“You kind of got stuck there through the winter and I know people are wondering,” he said.

The Brass Band Festival heavily utilizes Weisiger Park at the corner of Fourth and Main streets during its annual four-day festivities. This year, the festival is set for June 1-4.

Much of the remaining work on the park revolves around a stage and water wall space at the back of the park, which is anticipated to be where bands could perform. Last year, the city held off on work on the stage and the serenity bowl in the park’s fountain so that the park could be open to the public during the Brass Band Festival.

Plans for renovating the park stretch back years. The city commission approved conceptual plans for a renovation of the park in February of 2014, but plans were still in the works and on hold in the middle of 2015. Commissioners didn’t sign off on the three major features of the new park — the pergola, the fountain and the water wall — until February 2016.

The more-than-$600,000 project is being funded with money the city saved over a number of years.

“We’ve understood from the city manager … that at this point, he wanted to get it done and we’re going to try to make that happen, whether or not we have to go to different vendors and have a little bit more risk involved with performance, in our opinion, then that’s what we’ll do,” he said. “We were trying to avoid that if we could, but we’re prepared to do that.”

Industrial foundation’s role would be reduced under EDP reorganization…