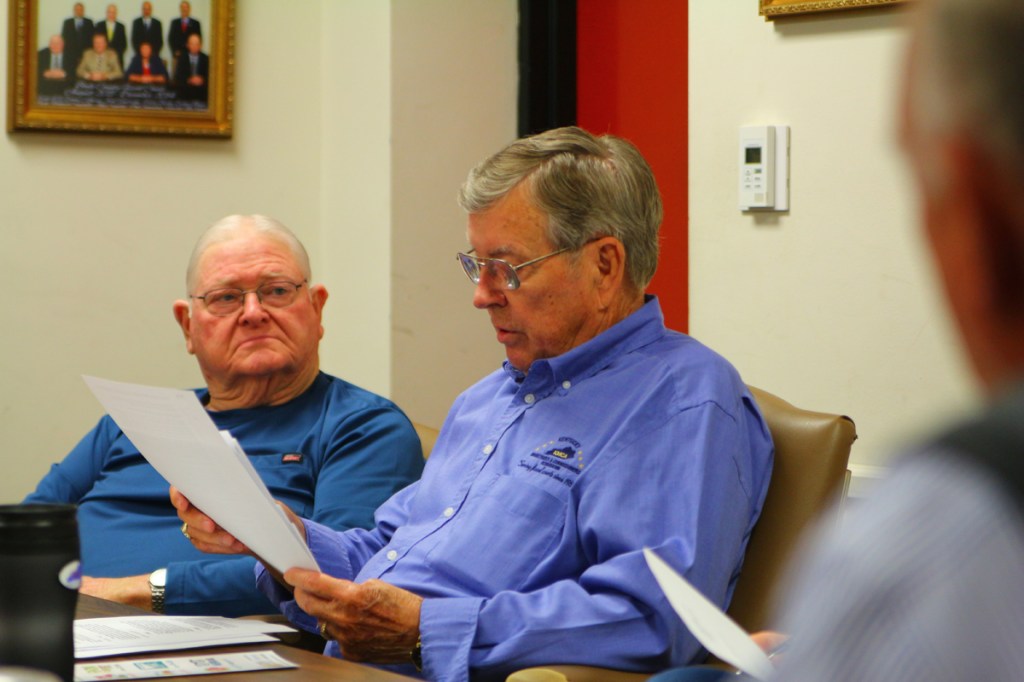 Ben Kleppinger/ben.kleppinger@amnews.com Boyle County Magistrate Jack Hendricks reads from a letter sent by the Danville-Boyle County Planning and Zoning Commission, declining to allow Hendricks to sit in on the hiring process for the next P&Z director. Hendricks said he was offended by the letter and proposed going as far as “disbanding” P&Z to correct the situation.

A Boyle County magistrate says he takes offense to a letter from the local Planning and Zoning Commission declining to allow him to sit in on the hiring process for the next P&Z director.

Magistrate Jack Hendricks said he wants to do “whatever it takes” to change the situation — even going so far as to suggest “disbanding” planning and zoning.

“I personally take this as an affront from an agency that we fund, to tell us that we have no business basically in their meetings. I don’t like that at all and I think if we need to write a new ordinance, if we need new bylaws, whatever it takes — this is unacceptable in my opinion that these people think they operate this way without any consequence,” Hendricks said at Tuesday’s Boyle County Fiscal Court meeting. “They think they operate with impunity and I think we need to change that and we have to do whatever it takes in my opinion to change it. If that means changing the bylaws, if that means changing the ordinance, if that means disbanding — you know, I’ve got a lot of options I think we can do.”

P&Z Commission Chairman Jerry Leber sent a letter to the Boyle Fiscal Court on April 18, stating it “would not be proper for the fiscal court to appoint or otherwise send any person (magistrates or otherwise) to participate with the personnel committee’s hiring of a new Planning and Zoning director.”

The letter cites several Kentucky Revised Statutes (KRS) and states that “this language reserves to (P&Z) authority over the hiring process for a director.”

“The sole responsibility to hire a director rests with (P&Z), and it would thus be inappropriate for the fiscal court to deploy further participants in the hiring process,” the letter concludes.

Elected officials with Boyle County and the Danville City Commission have expressed interest in the hiring process for the next P&Z director. Current Director Paula Bary plans to retire at the end of June after more than 20 years in the position.

Earlier this month, magistrates voted unanimously to “appoint” Hendricks to the P&Z Personnel Committee as a “liaison” for the fiscal court. That action prompted Leber’s letter.

“What really blows my mind is we’re the funding agency of this agency and for them to take this defensive stand that I think they have taken, and not be willing to even sit down and discuss it … I just really take offense at these people taking this kind of stand,” Hendricks said Tuesday. “I really feel like we as a board have to do whatever it takes to ensure that we have the oversight on any agency that we give money to — and that bars none.”

Director search may be over

Boyle County Attorney Lynne Dean said she spoke with P&Z attorney Bruce Smith about the letter to clarify that the fiscal court had just wanted “to be involved in the process” and “make their feelings known.”

“At the end of the discussion, he did tell me that he understood there weren’t going to be any additional committee meetings,” Dean said.

“Does that mean they’ve made their decision?” Magistrate John Caywood asked.

“I can’t confirm that for a fact,” Dean said. “But that is what I’m gathering from that conversation.”

Leber did not immediately return a call asking for confirmation on whether P&Z has completed its search for a new director. The P&Z office could not provide any information on the hiring process, but confirmed Tuesday afternoon that an executive session is scheduled for the next P&Z Commission meeting, 9 a.m. May 3 at Danville City Hall.

Judge-Executive Harold McKinney asked magistrates to “instead of just beating them up completely,” consider the contributions to the community that P&Z commissioners make.

“I understand what we wanted was we wanted to be a part of the process. What I envisioned was to sit down with the folks, Jack sitting down with the folks and say, ‘here’s what the fiscal court is proposing.’ I never envisioned that he would vote or sit in on anything,” McKinney said. “Before we beat the Planning and Zoning people up, understand they are volunteers. They make tough decisions and they take the heat for those. When it comes to a decision like this, I can basically understand why they think ‘this is our decision because we depend on this person.’”

McKinney said he agrees the whole situation “could have been handled a little differently.”

“I don’t think it’s too late for any of us to sit down with any of them and say, ‘this is what we’re looking, this is what we think,’” he said. “I don’t know what official action we can take right now … I think we’ve asked them to come in, run an organization and ultimately, I think we have to let them run their organization.”

Danville City Manager Ron Scott attended Tuesday’s fiscal court meeting and was asked about what the city had decided to do on the issue.

“We had a discussion of the issue. It was suggested by some of the commissioners that we might participate or might want to participate,” Scott said. “We looked into the legal issues, our city attorney looked into it and both he and I responded that we felt we did not have the statutory authority to participate in the hiring process.”

“At what level do you participate?” Magistrate Caywood asked. “If you’re talking about a voting member, then I agree. This being a liaison — I don’t see that as participating, because you’re not voting. Participating is voting, in my mind.”

Scott said the city also went along with the recommendation of City Attorney Stephen Dexter that if someone from the city were to be involved in the P&Z director search, that it should be a staff member from the city manager’s office, not an elected commissioner.

“We left that sort of at the invitation of (P&Z) to invite us to participate,” Scott said. “… We received no invitation.”

Hendricks tone softened somewhat by the end of the discussion

“For folks to step up and do a thankless job like that, I commend them 100 percent. But I do not commend this type of action to the agency that’s actually funding them,” he said. “… I just don’t agree with this type of attitude toward a simple explanation. A simple meeting, a simple come in and sit down would have worked, probably. But to send us a letter like this and say, ‘no because of KRS-this’ — I don’t care about the KRS. You cannot write a KRS that covers every planning and zoning operation in the state.”

Students work ‘Side-by-Side’ with local artists to create their…