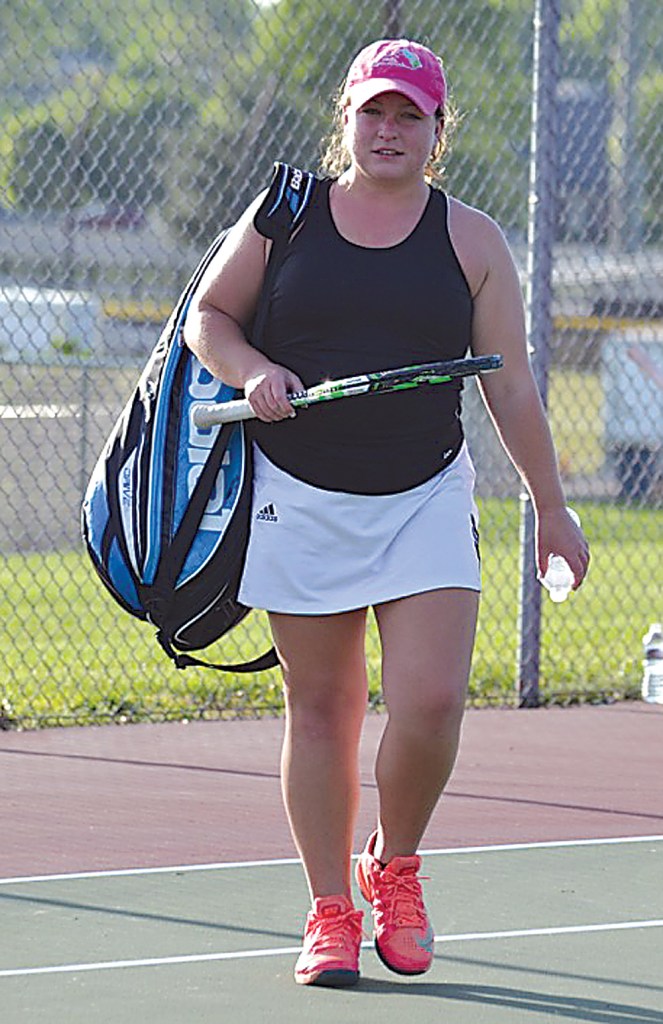 In his first year at Boyle County, Tao Costello’s tennis team went 4-8 and, as he tells it, “got drilled” by everyone in the region.

“It’s been a special year, it’s been unbelievable,” Costello said. “I’ve never had an undefeated season, we came close last year. … We wrapped up the season 15-0, and this is really special, kind of hard to believe.

“I’m going to enjoy this, no one can take this away from us. Next week is going to be fun.”

Next week is the region tournament, which Boyle will be hosting at their courts, along with courts at Centre College and Danville. Next Friday will be the first two rounds, followed by quarterfinals and semifinals on Saturday and the championships on the following Monday.

And of course, the Rebels are the defending region champ.

“I felt pretty confident being the region champion and having almost everyone back,” Costello said. 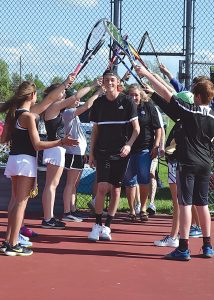 Elizabeth Leahey/For The Advocate-Messenger
Underclassmen raised their racquets to senior teammates at the Boyle courts during the senior recognition ceremony preceding the Boyle-Russell match. Eight team members are graduating in May; Josh Bishop is shown above, followed by his parents.

“I’m really proud of them,” Costello said. “They’ve done so much, helping new players coming in, talking to the new players. I’m so glad a lot of the young players got to play and see what it’s all about.

“This will be one of those seasons that’s special, you’ve got to enjoy it because who knows what tomorrow and next season will bring.”

Costello believed the team had the potential to go unbeaten heading into last season, but a stumble early to Casey County put that out of the possibilities. But they followed that loss with 17 straight wins, giving them a head full of steam entering this year.

And again, it was an early match against Casey this year which let Costello know his team could possibly pull off an undefeated season.

“It was our second match,” he said of the matchup with Casey. “I had a good idea of what the teams looked like. I knew Garrard would be competitive, and we beat them 7-2. We went down to Casey and Anna was up on Amber (Pierce) and it started sprinkling. I was like, ‘No, let’s get this played.’ This was the only team I was worried about, and after I saw that I knew this team could do something.”

Duncan has been the center of the success for the Rebels over the last five years. She started playing first singles as an eighth grader.

“She’s been a leader on our team since the eighth grade,” Costello said. “She’s been to state a couple times already. We’ve had some bad draws in the tournament and she always had to play the best girl on every team, so she’s fell short a couple of times. Last year was kind of a tough year, but she really bounced back her senior year. I couldn’t be happier. She’s playing really well right now.”

Even as the end of the season came closer and closer and the wins kept piling up, Costello said he wasn’t nervous about winning. He’s seen enough from his team to know they could take care of business.

In fact, his main concerns Thursday night were senior banners, balloons and refreshments.

And no matter what happens during the postseason, don’t sleep on the Rebels next year. Even as they were playing for an undefeated 2017, Costello was already thinking about 2018 and beyond.

“Of course, I want my seniors to have playing time, that was our main focus, but also at the same time, I want to build for the future,” Costello said. “There are a lot of seniors this year, more than most years. Next year, we’ll be competitive again. I’ve tried to make sure with being as deep as we are, like at Danville I played 12 girls, so I’m hoping we have potential to be competitive next year.”