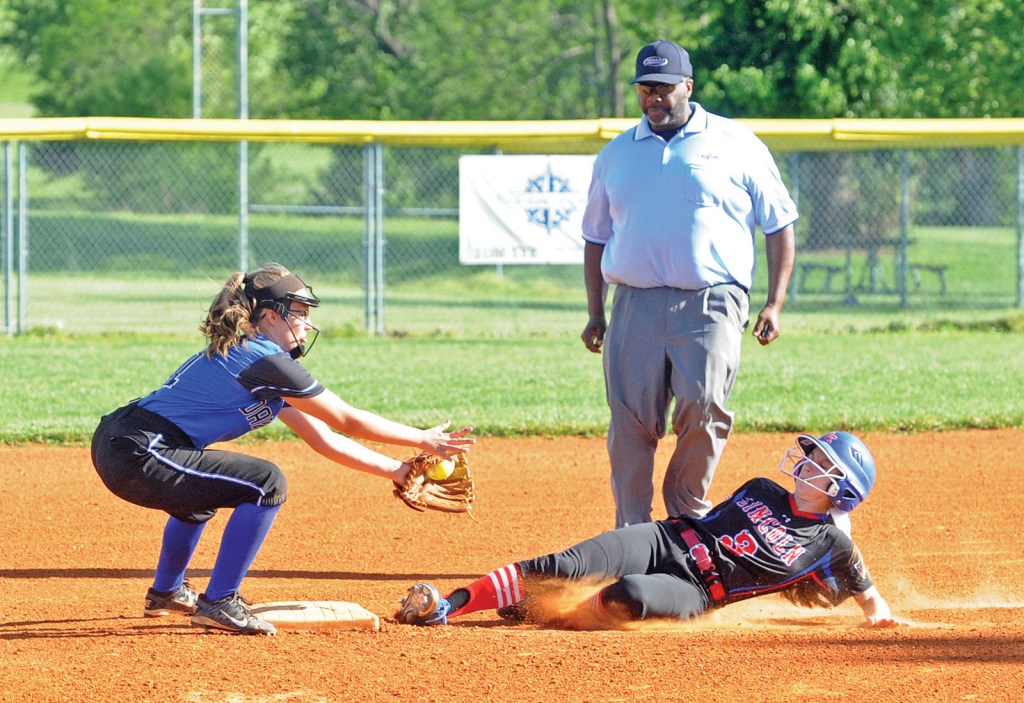 Danville hosted Lincoln County for the final 45th District regular-season game for the two teams, and the Patriots came out on top in five innings, 23-1.

The game was scoreless after two innings before Lincoln sent 11 hitters to the plate in the third inning, scoring eight runs.

“It took us a couple innings to get our timing down with their pitching, but once we got that down, we hit the ball pretty well,” Lincoln coach Jeff Young said. “The last two games, we’ve hit it real well. We went to Estill County Tuesday night and hit the ball well. Hopefully that’s a sign of things to come.

“Our pitching did well tonight, it was good against Estill as well. Defense was strong tonight. I was proud of the girls, coming out and taking care of a district game.”

The win comes on the back of a 15-0 victory at Estill County earlier in the week.

Admirals’ coach Joey Sallee said the energy and effort wasn’t there from his team.

“We come out one day, we play fairly competitive,” Sallee said. “We come out the next day and we’re just flat. We had 18 errors tonight. You beat yourself with 18 errors. And they were routine plays. Routine ground balls, bad throws, throwing the ball all over the field. All these things that we work on, we think we’ve got it ironed out, then we just lose focus. I think that’s what a lot of it is, we lose focus when the game gets here and it’s time to perform.”

Lincoln took advantage of the Danville defensive miscues in the fourth and fifth innings as well, scoring 15 more runs. The Patriots had 28 hits, but Sallee said his team helped Lincoln move runners throughout the game.

“People are going to hit the ball. We’ve got to be able to field it,” he said. “Tuesday against Garrard, Garrard hit the ball where we weren’t. That was a big part of that game. Tonight, I’m not taking anything away from Lincoln, they hit the ball really well, but we didn’t play a lot of what they hit. We just didn’t make plays.”

Coming back the next day and focusing on the task at hand is what Sallee wants from his team now.

“I told them, at this point, it’s easy to start pointing fingers, it’s easy to start blaming someone else,” Sallee said. “But unless you can look in the mirror and say, ‘I’ve had no errors, I’ve had a hit every at bat, I’ve been at every practice,’ you really can’t point any fingers.

“It’s easy to quit right now. I’m sure people are telling them how bad they are, how bad we are as coaches. You can either buy into that and believe it or try to come together and make something out of this season. I don’t know how they’ll respond.”

Sallee said his two pitchers — Brooke Thompson and Peyton Young — are doing exactly what he’s asked of them so far.

“Brooke Thompson’s pitching as well as we can ask her to,” he said. “Peyton Young is pitching well for us. (Hannah) Felty is hitting the ball. I think our pitchers are doing what we need them to do, they’re getting the ball over the plate, Peyton is keeping people off balance. But we’ve got to back them up.”

Young said he wants to see his team cut down on the mental lapses, particularly on the bases, in the future.

“We had a few mental lapses tonight,” Young said. “But they’ll learn. We just have to keep moving forward, keep having good pitching and stay healthy, and we’ll be OK.”