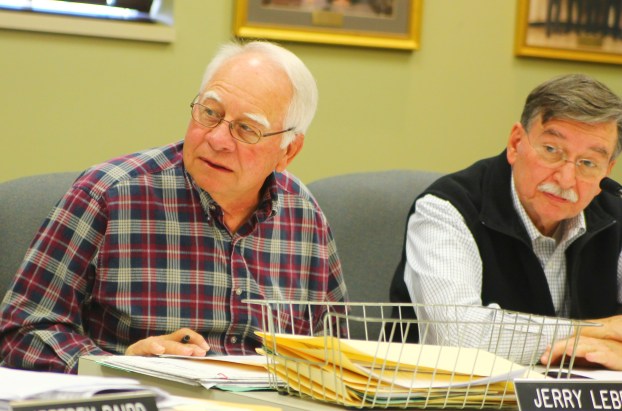 Ben Kleppinger/ben.kleppinger@amnews.com Jerry Leber, chairman of the Danville-Boyle County Planning and Zoning Commission, participates in a commission meeting in early April. On Wednesday, Leber dismissed as speculation a suggestion that the P&Z Personnel Committee has already selected the next P&Z director.

P&Z Chairman: ‘No statement has been made’ on hiring of next director

The search for Danville-Boyle County’s next Planning and Zoning director is still underway and suggestions that a candidate has been chosen are speculative, P&Z Chairman Jerry Leber said Wednesday.

“No statement has been made about (hiring the next director) and we won’t make a statement about it — period — until we make a recommendation to the entire Planning and Zoning Commission,” said Leber, who serves on P&Z’s Personnel Committee, the group handling the director search.

During Tuesday’s Boyle County Fiscal Court meeting, County Attorney Lynne Dean told magistrates about a conversation she had with P&Z attorney Bruce Smith that she said seemed to indicate the search for the next director was over.

“At the end of the discussion, he did tell me that he understood there weren’t going to be any additional (Personnel) Committee meetings,” Dean said.

“Does that mean they’ve made their decision?” Magistrate John Caywood asked.

“I can’t confirm that for a fact,” Dean said. “But that is what I’m gathering from that conversation.”

Leber denied Wednesday that a decision had been made.

“I guess that’s Lynn’s opinion,” he said. “I would not say that’s the case. I’d say that’s speculation on her part.”

Asked if he knows when the P&Z Personnel Committee will finish its work, Leber responded, “I can’t tell you definitively. We may make a recommendation next Wednesday; we may not.”

Next Wednesday, May 3, the Planning and Zoning Commission holds its monthly meeting at 9 a.m. in Danville City Hall.

Leber declined to comment on where P&Z is in the process of selecting a new director, the number of candidates who applied or whether the Personnel Committee is currently interviewing candidates.

Current Director Paula Bary is retiring at the end of June after more than 20 years with Planning and Zoning. Danville and Boyle County elected officials have said they do not like P&Z’s current four-day work week, and have expressed interest in participating in the process of hiring the next director.

Planning and Zoning’s budget for the coming fiscal year is $225,550, of which Boyle County Fiscal Court provides $65,000 and Danville contributes $75,000. P&Z anticipates getting about $85,000 from its own revenue streams, including permit fees, application fees and copies, Bary said.

Invaluable to the City of Danville. That’s how City Manager Ron Scott described the 100 government-appointed committee volunteers who were... read more