Bramel making most of college recruitment 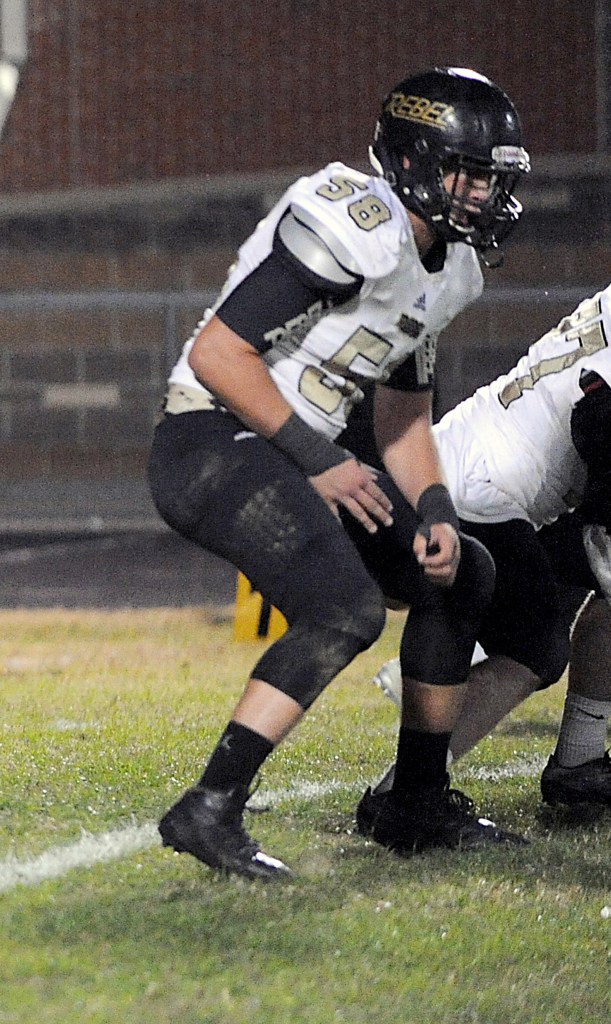 Matt Overing/matthew.overing@amnews.com Boyle County lineman Will Bramel keeps pulling in Division I scholarship offers. He hopes to have his decision announced before the end of June.

Will Bramel picked up his first three college football scholarships during the 45th District basketball tournament.

He waited to announce the news till after the tournament.

“It’s been really crazy, but at the same time very exciting,” the Boyle County junior said. “That was really hard just to not tell anybody. Then it just kind of exploded after that. Once it started, it just shot off like a rocket.”

Marshall, Eastern Kentucky and Purdue were the first three schools to offer Bramel, Boyle’s 6-foot-6, 270-pound offensive tackle. He was named as The Advocate-Messenger’s Lineman of the Year last year after dominating in the trenches.

Since that first week in February, Bramel has picked up seven more scholarship offers: South Alabama, Bowling Green (Ohio), Eastern Michigan, Georgia State, Ball State, Toledo and Army. EKU is the only school not in Division I on Bramel’s offer sheet.

One huge boost for Bramel has been his head coach. Chuck Smith was the football recruiting coordinator at the University of Kentucky and has helped show Bramel and his parents just what to expect in the process.

“I just kind of explained to him how it all works,” Smith said. “We put together a good highlight tape showing his skills, and then we got that tape out to different places, and we talked about what would start happening after that: If schools were interested, they’d start calling. And they started calling.”

Marshall offered before even speaking with Bramel. They saw the tape, called Smith and told him they’d offer. Purdue offered when they heard Marshall had offered, Bramel said.

Smith said he told Bramel that when schools make scholarship offers, they’re extending that offer to multiple players for just one or two positions on the roster.

“He has got to understand that when these schools make offers, he’s not the only person they’re making the offer to for that particular position,” Smith said. “They’re making it to probably 10 other guys for one or two positions. He’s got to continue to work hard, continue to impress, and then make a decision.”

Bramel was quick to say just how much of an impact Smith has had in his recruitment.

“Coach Smith has been tremendously helpful with me,” Bramel said. “He sat down with my mom and dad and I plenty of times, just talking it over, what I should be looking for and what would be best for me. I was actually in the conference room at the high school with him, my mom and dad when I got the Purdue offer. He’s been a huge help for me and I probably wouldn’t be here without him, honestly.”

Bramel said he’d like to make a verbal commitment in June, just before the start of his senior season. Right now, he’s taking in the process and looking at each school in-depth.

“I’m still exploring options, because I want to make sure I see what all is out there,” Bramel said. “Education is part of it, I look into that, then the coaches, the people within the program, then just what the actual football is like at a school. Those are the three biggest things I look at in a school.”

Bramel has taken visits to Kentucky and Louisville for spring games and attended camps like the Rivals Combine in Atlanta. Rivals.com and Scout.com, two of the top recruiting sites in the nation, have Bramel among the elite athletes in the 2018 class in Kentucky. Rivals lists him as the No. 13 player in the state; Scout has Bramel as the No. 1 player in the state for his position.

With 10 offers already, Smith said Bramel has already made an impressive showing.

“He’s done a good job of going around and visiting schools and doing his homework to see which school he thinks would be the best fit for him,” Smith said. “There’s possibilities that other offers come in, but if he didn’t get another offer, he’s got some pretty good ones to choose from on the table right now. To get your education paid for in today’s world is a big deal.”

“He’s high in character, strong work ethic, comes from a good, solid family that supports him,” Smtih said. “He’s got the skills in terms of quick feet, athletic, he plays basketball which always helps. If you play another sport, that indicates that you are athletic. That’s what college recruiters look for. He’s got the size, he’s got the height and the length that they’re looking for. What he’s not is heavy, but they’re smart enough to know that he’s going to put that weight on when he gets on campus and gets on their meal plan.”

Some of the schools he’s been in contact with have told him that they’ll redshirt Bramel during his freshman year. Most offensive linemen are redshirted simply so their bodies can mature to face college athletes every week.

That’s another area that separates Bramel from others in the 2018 class: He’s young. He’ll turn 17 in May.

“A lot of them seem to like the fact that I’m younger,” Bramel said. “The coach from Army was (at Boyle County High School), talking to me, saying he liked my film. When I told him I was only 16, he was just kind of like, ‘Wow.’ He wasn’t expecting that. I think they see it as an upside.

“To be ready for college ball, I’ll still need to mature my body, get bigger in the weight room. I’ll probably be redshirting wherever I go.”

Another non-football upside, Smith said, was Bramel’s ability on the basketball court. Colleges coaches look at that and see that he’s not just another big body, but an athlete. Bramel averaged 6.8 points and 4.2 rebounds per game for the Rebels on the court this year, playing in all 32 games. He’ll be back on the court next year, too.

Since the basketball season ended, Bramel said he’s gained 10 pounds — most of which came during the week after the Rebels’ final game. One of his major goals this offseason is to put on more pounds and build muscle.

After he commits this summer, Bramel said he wants to develop into a strong senior leader for Boyle.

“We have a bunch of guys who are juniors and seniors, specifically on the O-line, but they haven’t got the varsity reps that I have,” he said. “I want to make them better, everyone around me. For my individual game, I can work everything. Never good enough at anything. Run block, pass block, pulling, I’ve got a lot of room to improve still.”

Bramel will attend the Under Armour All-America Football Camp today in Cincinnati, where more schools could come calling.

Through it all, Bramel said his parents have been instrumental in helping him along the way.

“They’ve been enjoying it,” he said. “They always tell me that I’m the one doing the work and they’re just driving me around, but I wouldn’t be here without their support. They’ve helped me so much throughout this process. I wouldn’t be able to do it without them.”

Hazelwood hits the mark for Titans