Bipartisan Russophobia is a dangerous distortion

It’s a matter of adult common sense that we should always consider how our actions will be interpreted by those with whom we interact, especially by persons whose perspectives are different from our own. Without such awareness we simply don’t know what we’re doing and may be harmed by consequences we choose not to foresee.

This common-sense maxim has never been more relevant than in our worsening relationship with Russia today. Over the last few years American policy has seemed to move inexorably toward a new cold war against a nuclear-armed Russia that is Christian and no longer communist, but is still seen as an imperial power threatening democracy around the world. For our own sake, it’s urgent that we try to see our behavior from a Russian perspective, however much we dislike the authoritarian capitalism that replaced communism in the former Soviet Union.

So let’s turn down the patriotic din of mainstream media and politicians urging a confrontation with Russia. Let’s take the time to reflect on how we got from celebrating the end of Cold War I with the collapse of the Soviet Union 26 years ago, to a looming Cold War II with a renewed threat of nuclear war.

The map below provides much of the answer. 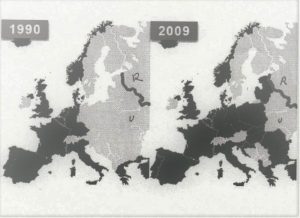 When NATO (North Atlantic Treaty Organization) began in 1949, its main purpose was collective security against the Soviet Union (USSR). As a counterweight to NATO the Soviet Union in 1955 joined with seven Eastern European communist republics (Albania, Bulgaria, Czechoslovakia, East Germany, Hungary, Poland, and Romania) to form the Warsaw Pact.

On the 1990 map above, the space between NATO and Russia was taken up by two tiers of republics: the Warsaw Pact nations on the west and the Baltic States, Belarus, Ukraine and Moldova on the east. These eastern republics were (with Russia) part of the Soviet Union (USSR). When the Soviet Union dissolved in 1991, a space half the size of Europe yawned between Russia and NATO. It contained newly independent former members of the Warsaw Pact and of the USSR, all of whom had to reorient themselves in relation to Western Europe and the Russian colossus to the east.

As we can see from the 2009 map, NATO did not go away once the dissolution of the Soviet Union and Warsaw Pact made its original purpose obsolete. Instead, it expanded to include the former Warsaw Pact countries as well as a part of the Soviet Union — the Baltic States (Lithuania, Latvia and Estonia). By including the Baltic States, NATO brought the military umbrella of the United States right up to the Russian border. Imagine the U.S. reaction if the Warsaw Pact had continued to exist and Mexico and Cuba joined it.

The purpose of NATO in its current expanded version is controversial, with some critics (like Donald Trump until a week ago) arguing that it is no longer needed and is a drain on the U.S. budget. But, as Karl-Heinz Kamp, Research Director at the NATO Defense College in Rome, explains, the United States still derives major benefits from the alliance:

“Through NATO, the US guarantees its influence in today’s Europe — a continent which is stable, prosperous (despite the Euro crisis), benign and, above all, politically likeminded. . . [Moreover] Europe remains a logistical hub for global US military operations.”

The ongoing Ukraine crisis which has done so much to poison US-Russia relations must be seen in the context of the rapid march of NATO to the border of Russia. On Nov. 21, 2013 the Ukrainian government, under pressure from Russia, announced that it would not sign a trade and political association agreement with the European Union that would have drawn Ukraine more closely into the orbit of Western Europe. This decision brought 100,000 protestors into Maidan, the central square of the Ukrainian capital Kiev.

These demonstrators received open political support from the Obama administration. In December of 2013 Assistant Secretary for European and Eurasian Affairs Victoria Nuland, accompanied by US Ambassador to Ukraine Geoffrey Pyatt, visited the demonstrators in Maidan Square and handed out cookies. On Feb. 6 a transcript of a telephone call between Nuland and Pyatt was released on YouTube (probably by Russian intelligence).The two Americans can be heard discussing which opposition politicians would be good for a new government. They agree that the best choice would be Arseniy Yatseniuk (“Yats is the guy”).

On Feb. 22, 2014, escalating unrest and violent clashes between protestors and police caused democratically elected Ukrainian President Yanukovych to flee to Russia. The Ukrainian parliament, in an unconstitutional vote, stripped Yanukovych of his presidency and voted in Yatseniuk as prime minister.

Russia’s response to these developments was twofold. First, in March of 2014 the majority Russian population of Crimea voted to join Russia, and Russia then annexed it. The main base of the Russian Black Sea Fleet was the Crimean port of Sevastopol. Crimea had been part of Russia from 1783 to 1954 when Soviet leader Khrushchev attached it to the Ukraine (which, like Russia, was part of the Soviet Union). From a historical perspective, the 2013 annexation was not a radical change for Crimea.

Second, Russia has provided military support to separatist rebels in eastern Ukraine. Russia’s purpose seems to be to destabilize Ukraine without annexing it. This blocks NATO from incorporating Ukraine and creating another military threat on Russia’s border.

The Washington narrative is that Russia’s behavior is expansionist and a threat to world peace. The Russians make the same charge against US-dominated NATO.

Perhaps we can better understand the Russian perspective if we keep in mind the words of the Monroe Doctrine, a foundation of American foreign policy: “we should consider any attempt on their [European governments’] part to extend their system to any portion of this hemisphere as dangerous to our peace and safety.” What would we have done in Russia’s place?

What is the work of Economic Development Partnership for…