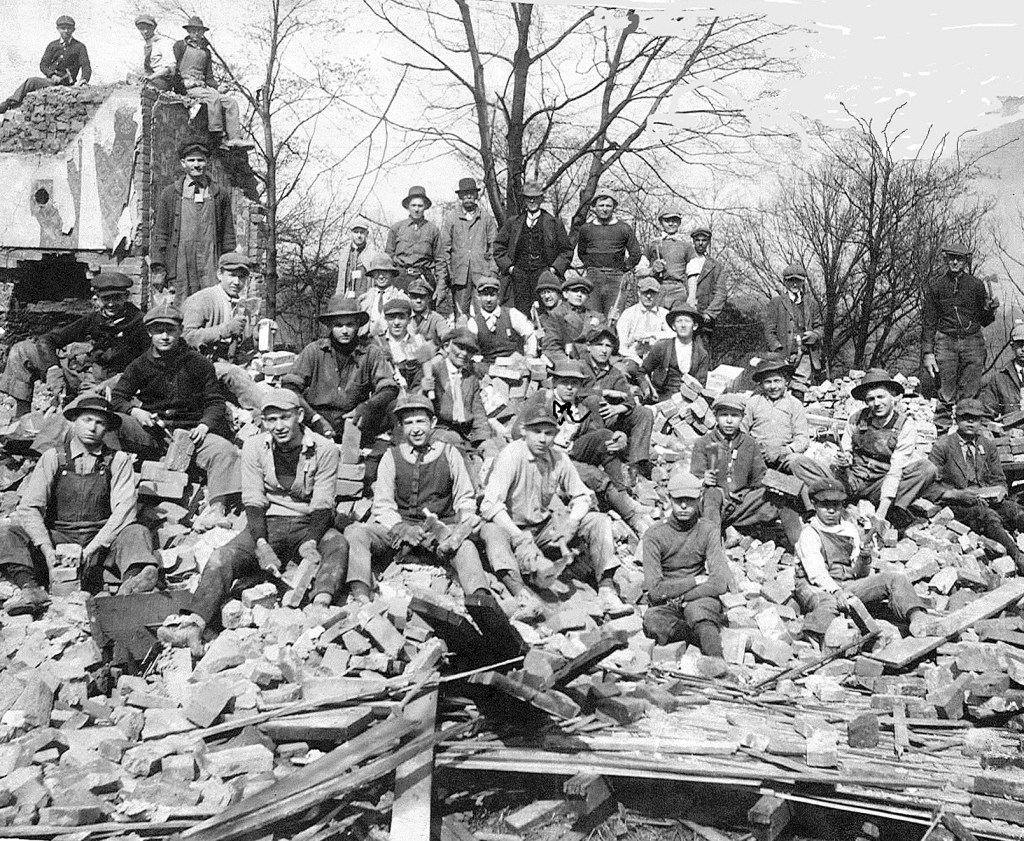 Caption for mystery photo: A mysterious photograph has been identified. A Kentucky Standard reporter, Ollie Cundiff, wrote in the April 19, 1917, edition that the Boy Scouts worked in the Danville brickyards to clean 15,000 bricks from an old house razed by the Queen and Crescent Railway Co. near the railyards. According to the reporter, “Mr. Marcosson took several snapshots of us at work. The owner of the house, Mr. Fackler, gave us each a small flag. After we got done, our backs and hands were sore and stiff, but we did not mind as we got a check for $19.50 to help the Boy Scouts Treasury.”

Here are excerpts from the weekly in-house newspaper at Kentucky School for the Deaf.  Printing The Kentucky Deaf-Mute, which became The Kentucky Standard in 1896, gave the male students an opportunity to learn the printing trade. KSD published the newspaper continuously from 1874 to 2004.

The boys who made the grandstand for the ball park were in such a hurry to add this convenience that they made a job that will lead people who patronize it to conclude that they are carpenters of the saw and hatchet variety. It don’t pay, boys, to do such a job anywhere.

A long-felt nuisance, the town cow. Incontrovertible evidence that spring is here is furnished by the fact that the town cows have commenced depredations in the yards. We wish we knew how to “down” the vicious rogues that daily make life a burden by breaking into our yards, ruining their beauty by destroying flower beds, young trees, plants, etc. The nuisance is so great here that few people will try to adorn their yards having by experience found the uselessness of doing so, so long as that privileged character, the town cow, is allowed to come and go with no stock law to molest or make her afraid. April 21 — The town cow has been corralled at last. The City Council has passed an ordinance to prevent the running of stock at large. Sing the doxology, gentlemen.

Crab Orchard Springs, before the war the most famous watering place in the South, has been sold to representatives of the Keeley bichloride of gold cure for drunkenness. The price paid was $100,000. It is situated in our adjoining county of Lincoln and has always been a favorite resort of Danville people who will miss it hereafter.

Last Saturday afternoon the girls took a long walk chaperoned by Miss Cary Willis. All went well until we got to a creek about a mile from town. As it was a little windy, Grace Combs’s hat blew off and fell in the creek. We were all excited and did not know what to do. Miss Willis sent May Douglass to get it but she could not reach it. Finally a man came to our assistance with a very smart dog. The dog swam out in the creek and got the hat. This calmed the excitement but Grace’s hat got very wet.

Easter Sunday it rained, sleeted and snowed. It was a bad day for the display of Easter finery. No parade (hats or finery)! Most disastrous defeat since Congress turned down suffrage last year. Great pity!

From “The Girls’ Department”, reporter Gladys Risley wrote, another baseball game was played between the K.S.D nine and the Danville Red Sox; the result was that our team won by the score of 4 to 3. This game was the first one we had won this season.

The real estate holdings of the school now amount to 200 acres, consisting of site, yards, garden, farm and pasture land. Much of the food consumed is raised on the place, and there is a fine herd of Holsteins that supply an abundance of milk for the pupils. The American Annals of the Deaf for January, 1942 lists the value of the plant of this school at $550,000.

Baseball by Chas. A. Thomas

The Grand Old Pastime is back with us again — baseball. Each evening after school hours one can go over to the ball diamond and watch the boys pass the ball around, knock third sackers and homers, catch “flies.” Spectators get a thrill out of watching the umpire yell “play ball” and “you’re out!”

Not the men they once were

The local Alumni met the KSD team in a game of softball on the 17th. It looked for a while as though the old-timers would make good their boast  that they would teach the brash youngsters who had challenged them a lesson, but by-and-by old knees began to wobble, base runners faltered and breath grew short while our fat friends “larded the lean earth” between bases. The youngsters won by a score of 6 to 4. 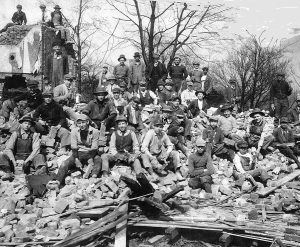 Caption for mystery photo: A mysterious photograph has been identified. A Kentucky Standard reporter, Ollie Cundiff, wrote in the April 19, 1917, edition that the Boy Scouts worked in the Danville brickyards to clean 15,000 bricks from an old house razed by the Queen and Crescent Railway Co. near the railyards. According to the reporter, “Mr. Marcosson took several snapshots of us at work. The owner of the house, Mr. Fackler, gave us each a small flag. After we got done, our backs and hands were sore and stiff, but we did not mind as we got a check for $19.50 to help the Boy Scouts Treasury.” 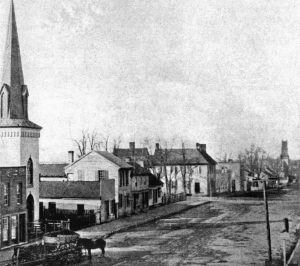 The big two-story frame building on the corner of Fourth and Main streets housed KSD from its opening day on April 11, 1823 until 1826. It appears to have been built in 1798-9 by Arthur Thompson. Mr. Calvin Morgan Fackler, Danville historian, thought that Centre College classes were held in this house while the new building, “Old Centre,” was going up. If Mr. Fackler is correct, the deaf moved in about the time the college classes moved out. When the school moved to the Tompkins house on South Second Street in 1826, the Rev. James K. Burch bought the building for a short-lived school for girls. The building changed hands several times and was a tavern when it burned down in 1873.

From our files, April 29