Question: Mr. Sampson, we’re going through some of my parents’ things due to downsizing. No one can remember these pieces. I assume that they are cuff links. But the symbols have us stumped. I thought they were the International Odd Fellows with the three links. My great-grandfather was a life time member but the initials don’t make sense. I doubt that they have much value but we’re curious. Thanks for the great articles. We look forward to them every week. 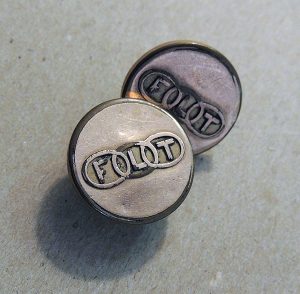 Answer: You were pretty much on the right track. These are cuff links and they are Odd Fellows. The proper name is Independent Order of Odd Fellows, not International, though they are a huge international group.

The Washington Lodge No. 1 was housed in the Seven Stars Tavern. There were several unofficial IOOF lodges in America that predate 1819, such as New York City circa 1806 – 1818.

But due to charter relationships or issues, the Baltimore lodge is considered the first.

The IOOF was the first fraternal group to include both men and women when it adopted the Beautiful Rebekah Degree for women in 1851. The IOOF promotes charity works and according to its purpose, “Visit the sick, relieve the distressed, bury the dead and educate the orphan.”

Ahhh, all of these fraternal groups are ripe with symbolism. The Odd Fellows are also known as the Triple Link Fraternity, hence the three interlocking links.

The FLT initials will make sense when I tell you. They stand for Friendship, Love and Truth. The three traits that all Odd Fellows were to live by.

Believe me, in doing the research for this article the symbols, meanings and philosophies are mammoth! If you have a passing interest in IOOF, or any other fraternal organizations, their history and lore is fascinating and long. Look it up some time.

I’d date these cuff links to the 1890s or the early 1900s. I see some wear to the edges and I’d wager that they are gold-filled.

You’re right about the value. These might appeal to a IOOF member or historian but other than that the market interest is going to be sporadic. I would expect them to be priced in a nice antiques store for about $15. Thanks for sharing them with us.