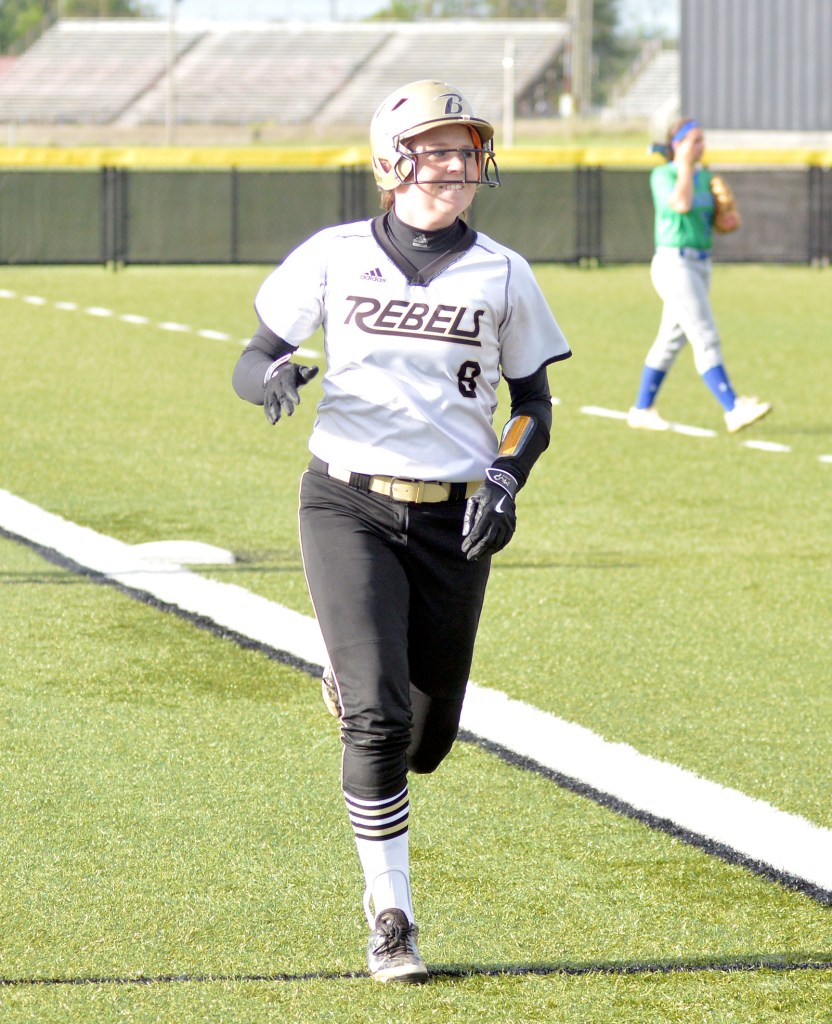 Jeremy Schneider/jeremy.schneider@amnews.com Boyle County's Gracie Edmiston heads into third base after hitting a two-run home run in the bottom of the first inning. Her homer helped ignite the Rebels in a 10-2 win over North Laurel.

After giving up an unearned run in the top of the first inning on a two-out error, the Boyle County softball team was looking for something to put them back on track against North Laurel.

Gracie Edmiston found the perfect pitch to do just that.

Edmiston blasted a two-run home run to right field in the bottom of the first, starting the Rebels engine in a 10-2 win over the Jaguars on a blustery Monday evening at Rebel Stadium. It was North’s second loss in 20 games this season.

North’s Rebecca Riley popped up to second base in the first inning, but Boyle second baseman Kelly Lay misplayed the ball and it dropped to the turf. Courtney Foley smacked a double in the next at bat, giving the Jags a 1-0 lead.

“We just weren’t fundamental on that play and dropped the ball, and it was kind of a momentum swing because that’s the way ball works — base hit, base hit, they got a run scored,” Deem said. “But I was really proud with how they responded. Gracie got a pitch she liked.”

But it didn’t take long for the Rebels (17-9) to answer. Channing Whitehouse reached on a one-out single, and Edmiston’s blast erased the narrow deficit.

The Rebels weren’t done in the inning. Lay immediately redeemed herself after the error, driving in Keely Bowling and Danielle Roney with a single and a 4-1 lead.

“We were down, we were getting on ourselves,” Edmiston said. “Then just to get that going, getting back into the lead helped us throughout the game.

“It was the third at bat (of the game), so I didn’t really know what she had, but I one came over and I knew I could drive it. I know when they’re gone, it felt pretty good.”

Lay drove in Roney again in the third inning with a double that hugged the left field line. Lay finished the day going 2-for-4 with three RBI. Roney went 3-for-3 with three runs, also scoring in the three-run fifth inning.

The Rebels had 14 hits, hitting .438 in 32 at bats. And it was production from all over the lineup — Madison Robbins and Whitehouse went 5-for-8 at the top of the lineup while Roney, Kelsey Lanham and Lay went 6-for-9 in the 6-7-8 holes.

“The (2012 and ‘13) teams I had here were really good, but as I said earlier, this team has a different makeup. We’ve got seven or eight kids, when they’re clicking, they can drive the ball,” Deem said. “We’ve got some speed at the right spots to get on base. When we’re seeing the ball and barrelling it up, we can be dangerous.”

Edmiston added, “Coach Deem always talks about discipline, and I feel like we have strong hitters, one through nine, all throughout. We work a lot on discipline, just clearing our heads and doing what we’re taught to do.”

Katy Grace Chadwell was nearly untouchable in the circle, getting the win in six innings. She gave up two hits and one unearned run, striking out a pair of batters and not issuing a walk.

McKinley Rush saw her first action since March 31; she has been sidelined while dealing with a strain in her pectoral muscle. The senior pitched the seventh inning, allowing one run on one hit and one walk.

The Rebels picked up a game Wednesday at Rockcastle County before heading to the difficult Owensboro Catholic Classic this weekend. They’ll play four games, and their three Kentucky opponents — Mercy, Marshall County and Hancock County — entered this week with a combined record of 41-26.

North Laurel, which plays at Garrard County on Thursday, fell to 18-2 but still leads the 13th Region standings by three games.

“I keep talking to them about being consistent, stringing innings together, offensively but also defensively,” Deem said. “We’ve had opportunities this year where we’ve jumped out on people and then we hit the cruise button too early and next thing you know, we’re in a dogfight or we lose the game. That’s one of the things we’re trying to do is stay mentally focused through seven innings and not three or four, not just focused when the good times are going on, how to handle success.”